That is, if a sinusoid is input to an LTI system, the output will be a sinusoid at the same frequency, but possibly altered in amplitude and phase. This follows because the output of every LTI system can be expressed as a linear combination of delayed copies of the input signal. In this section, we derive this important result for the general case of

sinusoids at the same frequency.

We want to show it is always possible to solve

. For each component sinusoid, we can write
Applying this expansion to Eq.

are known. We now have two equations in two unknowns which are readily solved by (1) squaring and adding both sides to eliminate

which has a unique solution for any values of

To show by means of phasor analysis that Eq.

(A.2) always has a solution, we can express each component sinusoid as

Thus, equality holds when we define

is just the polar representation of a complex number, there is always some value of

equals whatever complex number results on the right-hand side of Eq.

As is often the case, we see that the use of Euler's identity and complex analysis gives a simplified algebraic proof which replaces a proof based on trigonometric identities.

The heart of the preceding proof was the algebraic manipulation

``factors out'' of the sum. Inside the sum, each sinusoid is represented by a complex constant

, known as the phasor associated with that sinusoid.

For an arbitrary sinusoid having amplitude

Thus, a sinusoid is determined by its frequency

(which specifies the carrier term) and its phasor 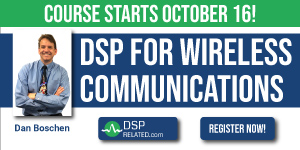