I am trying to understand cyclic prefix concept that is used in LTE. 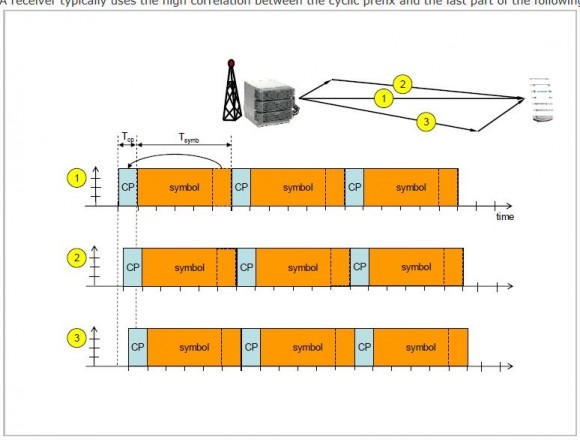 Can anyone throw some light on this?

Suppose certain carrier transfers signal, which arrives as sin(wt) at receiver through line of sight. Then secondary path through reflection from some obstacle would be longer and the signal transmitted would arrive with delay as sin(wt-phi). Then at antenna port those signals add up as r(t)=sin(wt)+sin(wt-phi)=2sin(wt-phi/2)cos(phi/2)=A*sin(wt-phi/2). In other words, the signals will add up as same carrier frequency, but with different amplitude and with some phase offset. Both factors can be compensated with equalizer. Of course, those signals would have different magnitude, but that just complicates the math a little, but concept is the same. This works with any OFDM system, not only LTE.

"Cyclic Prefix" is introduced to overcome ISI (intersymbol interference) and simplify the equalization problem in OFDM.

Please refer to a textbook on OFDM.

thanks, gmsk1. So, cyclic prefix itself does not eliminate interference effects but helps the receiver in equalization ...

thanks. Could you indicate how adding cyclic prefix reduces ISI?

Multipath propagation on primitive level makes two things: previous symbol can step on current one; current symbol can step on the next one. Adding CP makes the symbol longer, longer that much, that you can cut it in the middle allowing some margin for previous symbol delay and some margin for the current symbol to not step on the next. And cyclical continuation is just convenient way of doing that. So basically you cut some shorter window in the middle of longer symbol, where head and the tail could be spoiled.

To clarify, with multipath propagation, multiple copies of current symbol can also step into each other. Right?

For example, in the figure above, the first symbol itself can be changed due to multiple copies messing due to additive effect ...

All the replies in this thread are useful and I will add this link:

for basic visualisation of cyclic prefix but there are some funny typing errors.

Yes, exactly, multiple copies of the symbol could step on each other. However, as I have shown with that simple sin(wt) example, that results in some magnitude degradation and phase offset which could be eliminated with equalizer. However, if other symbol steps on us, it would bring another unexpected phase offset, which could not be eliminated with equalizer.

Theoretically, one may eliminate ISI by adding guard interval of silence in front and after every symbol. However, that is hard practically, as would require precise timing and hard on-off modulation. Adding CP relieves both. Because of cyclic extension, one may start sampling somewhere within the symbol, where isi is not present. As to hard switching modulation, practical systems apply windowing process, where symbols smoothly transit one in another.

Back to this thread to find some answer. I thought I knew about cyclic prefix (CP) and its significance, after all I am myself engaged in both 3GPP uplink and downlink baseband processing design. I started to question how does cp actually work. If we chop off a window of time to get same symbol(though overlapped by multipath arrivals) then fair enough. But what I do in my design is that I have to chop off cp completely from frame start as reference. How do we know we are chopping off from correct start?

Though cutting CP and leaving just original frame looks tempting, it is not practical as it gives no benefits. Because sampling point offset you never sample same time with transmitter, and that results in phase offset. Next, as LO phases are not synchronised at both ends, which will add to phase offset. On the other hand, the very tail of the frame is damaged due to windowing process, where you smooth neighbour symbols transition. Thus, setting the goal to chop off exactly CP is errorneus in concept IMHO. Just because equalization in inevitable phase rotation is always required, start sampling within CP is what was in mind in its design.

If you think how to find CP to symbols boundary, use single sign bit autocorrelator.

But I am following standards or so and I got design examples from Intel and from various other industries. Once I receive the Uplink stream from radio through cpri, I chop off CP completely and the rest is the OFDM symbol for fft…

So the start of frame is the crucial point? I am just trying to understand where does multipath issue fit here with frame start and at my work for BBU.

IMO you are reading those references too literally. CP removal is no way chopping exactly CP leaving a frame alone, but rather cutting FFT sized block out of received symbol.

But I read code from Intel design directly and they chop off exact cp length literally (normal or extended).

However recently I was told to add variable offset to start of cp removal but how this is computed or how does it relate to multipath I got no idea.

I had been also involved in several LTE DDC designs from radio ADC to cpri end and I don't remember any module that computed such cp offset or did anything with multipath apart from having several diversities.

That doesn't contradict nothing of what told before. Although windowing is not mandated by the spec, this step is often added to smooth symbol to symbol transition. That is a reason why tail of the symbol is worse. And because symbol boundary is dispersed, the steategy is to start sampling a little ahead, somewhere in cp. Other than that it's theoretically possible to sample right after cp.

Next, dropping 160/144 samples no way means there was chopping of cp exactly as exact symbol boundary is unknown.

The only point is that if fading path wad so long, that its delay spead over whole cp, start sampling within cp will face signal degradation.

To further support rrlagic's claims of design intent, the LTE Toolbox from Mathworks, which claims compliance with the Standard, provides a function lteOFDMDemodulate() which models a compliant LTE OFDM demodulator. This function takes an input parameter called cpfraction to control the position within the cyclic prefix at which demodulation is performed.

The documentation is brief in describing cpfraction but it says:

The FFT is positioned partway through the cyclic prefix to allow for a certain degree of channel delay spread while avoiding the overlap between adjacent OFDM symbols.

I basically don't disagree. We can fft a frame starting anywhere [from within cp section right to end of cp] for one complete symbol but not exceed that to next symbol.

I was just trying to see where this start of fft frame is decided. As I mentioned we now got a sort of variable offset value for first cp in our system and this seems exactly what determines the start. Once offset applied to stream we chop off exact cp length till this offset is updated (assuming it is dynamic).

I am not sure how this offset is decided in our system. surely some delay/correlation functionality.

A dynamic offset will be hard to cope with as our storage could get in rate issues. And it gets more complex since multiple UE signals are received.