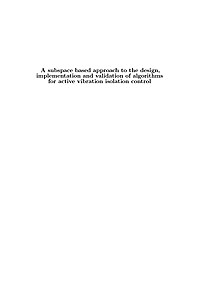 A Subspace Based Approach to the Design, Implementation and Validation of Algorithms for Active Vibration Isolation Control

Vibration isolation endeavors to reduce the transmission of vibration energy from one structure (the source) to another (the receiver), to prevent undesirable phenomena such as sound radiation. A well-known method for achieving this is passive vibration isolation (PVI). In the case of PVI, mounts are used - consisting of springs and dampers - to connect the vibrating source to the receiver. The stiffness of the mount determines the fundamental resonance frequency of the mounted system and vibrations with a frequency higher than the fundamental resonance frequency are attenuated. Unfortunately, however, other design requirements (such as static stability) often impose a minimum allowable stiffness, thus limiting the achievable vibration isolation by passive means. A more promising method for vibration isolation is hybrid vibration isolation control. This entails that, in addition to PVI, an active vibration isolation control (AVIC) system is used with sensors, actuators and a control system that compensates for vibrations in the lower frequency range. Here, the use of a special form of AVIC using statically determinate stiff mounts is proposed. The mounts establish a statically determinate system of high stiffness connections in the actuated directions and of low stiffness connections in the unactuated directions. The latter ensures PVI in the unactuated directions. This approach is called statically determinate AVIC (SD-AVIC). The aim of the control system is to produce antidisturbance forces that counteract the disturbance forces stemming from the source. Using this approach, the vibration energy transfer from the source to the receiver is blocked in the mount due to the anti-forces. This thesis deals with the design of controllers generating the anti-forces by applying techniques that are commonly used in the field of signal processing. The control approaches - that are model-based - are both adaptive and fixed gain and feedforward and feedback oriented. The control approaches are validated using two experimental vibration isolation setups: a single reference single actuator single error sensor (SR-SISO) setup and a single reference input multiple actuator input multiple error sensor output (SR-MIMO) setup. Finding a plant model can be a problem. This is solved by using a black-box modelling strategy. The plants are identified using subspace model identification. It is shown that accurate linear models can be found in a straightforward manner by using small batches of recorded (sampled) time-domain data only. Based on the identified models, controllers are designed, implemented and validated. Due to resonance in mechanical structures, adaptive SD-AVIC systems are often hampered by slow convergence of the controller coefficients. In general, it is desirable that the SD-AVIC system yields fast optimum performance after it is switched on. To achieve this result and speed up the convergence of the adaptive controller coefficients, the so-called inverse outer factor model is included in the adaptive control scheme. The inner/outer factorization, that has to be performed to obtain the inverse outer factor model, is completely determined in state space to enable a numerically robust computation. The inverse outer factor model is also incorporated in the control scheme as a state space model. It is found that fast adaptation of the controller coefficients is possible. Controllers are designed, implemented and validated to suppress both narrowband and broadband disturbances. Scalar regularization is used to prevent actuator saturation and an unstable closed loop. In order to reduce the computational load of the controllers, several steps are taken including controller order reduction and implementation of lower order models. It is found that in all experiments the simulation and real-time results correspond closely for both the fixed gain and adaptive control situation. On the SR-SISO setup, reductions up to 5.0 dB are established in real-time for suppressing a broadband disturbance output (0-2 kHz) using feedback-control. On the SR-MIMO vibration isolation setup, using feedforward-control reductions of broadband disturbances (0-1 kHz) of 9.4 dB are established in real-time. Using feedback-control, reductions are established up to 3.5 dB in real-time (0-1 kHz). In case of the SR-MIMO setup, the values for the reduction are obtained by averaging the reductions obtained in all sensor outputs. The results pave the way for the next generation of algorithms for SD-AVIC.