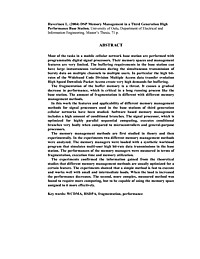 Most of the tasks in a mobile cellular network base station are performed with programmable digital signal processors. Their memory spaces and management features are very limited. The buffering requirements in the base station can have large instantaneous variations during the simultaneous transmission of burst' data on multiple channels to multiple users. In particular the high bit-rates of the Wideband Code Division Multiple Access data transfer evolution High Speed Downlink Packet Access create very high demands for buffering. The fragmentation of the buffer memory is a threat. It causes a gradual decrease in performance, which is critical in a long running process like the base station. The amount of fragmentation is different with different memory management methods. In this work the features and applicability of different memory management methods for signal processors used in the base stations of third generation cellular networks have been studied. Software based memory management includes a high amount of conditional branches. The signal processor, which is optimized for highly parallel sequential computing, executes conditional branches very badly when compared to microcontrollers and general-purpose processors. The memory management methods are first studied in theory and then experimentally. In the experiments two different memory management methods were analyzed. The memory managers were loaded with a synthetic workload program that simulates multi-user high bit-rate data transmissions in the base station. The performances of the memory managers were measured in terms of fragmentation, execution time and memory utilization. The experiments confirmed the information gained from the theoretical studies that different memory management methods are usually optimized for a certain feature. The experiments showed that a simple method is fast to execute and works well with small and intermediate loads. When the load is increased the performance decreases. The second, more complex, measured method was found to require more computing, but to be capable of using the memory space assigned to it more effectively.