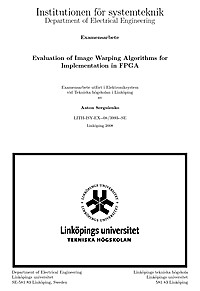 Evaluation of Image Warping Algorithms for Implementation in FPGA

The target of this master thesis is to evaluate the Image Warping technique and propose a possible design for an implementation in FPGA. The Image Warping is widely used in the image processing for image correction and rectification. A DSP is a usual choice for implantation of the image processing algorithms, but to decrease a cost of the target system it was proposed to use an FPGA for implementation. In this work a different Image Warping methods was evaluated in terms of performance, produced image quality, complexity and design size. Also, considering that it is not only Image Warping algorithm which will be implemented on the target system, it was important to estimate a possible memory bandwidth used by the proposed design. The evaluation was done by implemented a C-model of the proposed design with a finite datapath to simulate hardware implementation as close as possible.