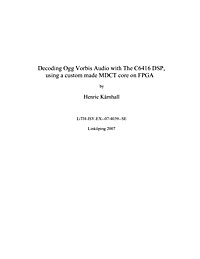 Decoding Ogg Vorbis Audio with The C6416 DSP, using a custom made MDCT core on FPGA

Ogg Vorbis is a fairly new and growing audio format, often used for online distribution of music and internet radio stations for streaming audio. It is considered to be better than MP3 in both quality and compression and in the same league as for example AAC. In contrast with many other formats, like MP3 and AAC, Ogg Vorbis is patent and royalty free. The purpose of this thesis project was to investigate how the C6416 DSP processor and a Stratix II FPGA could be connected to each other and work together as co-processors and using an Ogg Vorbis decoder as implementation example. A fixed-point decoder called Tremor (developed by Xiph.Org the creator of the Vorbis I specification), has been ported to the DSP processor and an Ogg Vorbis player has been developed. Tremor was profiled before performing the software / hardware partitioning to decide what parts of the source code of Tremor that should be implemented in the FPGA to off-load and accelerate the DSP.