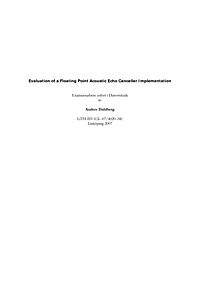 This master thesis consists of implementation and evaluation of an AEC, Acoustic Echo Canceller, algorithm in a floating-point architecture. The most important question this thesis will try to answer is to determine benefits or drawbacks of using a floating-point architecture, relative a fixed-point architecture, to do AEC. In a telephony system there is two common forms of echo, line echo and acoustic echo. Acoustic echo is introduced by sound emanating from a loudspeaker, e.g. in a handsfree or speakerphone, being picked up by a microphone and then sent back to the source. The problem with this feedback is that the far-end speaker will hear one, or multiple, time-delayed version(s) of her own speech. This time-delayed version of speech is usually perceived as both confusing and annoying unless removed by the use of AEC. In this master thesis the performance of a floating-point version of a normalized least-mean-square AEC algorithm was evaluated in an environment designed and implemented to approximate live telephony calls. An instruction-set simulator and assembler available at the initiation of this master thesis were extended to enable; zero-overhead loops, modular addressing, post-increment of registers and register-write forwarding. With these improvements a bit-true assembly version was implemented capable of real-time AEC requiring 15 million instructions per second. A solution using as few as eight mantissa bits, in an external format used when storing data in memory, was found to have an insignificant effect on the selected AEC implementation’s performance. Due to the relatively low memory requirement of the selected AEC algorithm, the use of a small external format has a minor effect on the required memory size. In total this indicates that the possible reduction of the memory requirement and related energy consumption, does not justify the added complexity and energy consumption of using a floating-point architecture for the selected algorithm. Use of a floating-point format can still be advantageous in speech-related signal processing when the introduced time delay by a subband, or a similar frequency domain, solution is unacceptable. Speech algorithms that have high memory use and small introduced delay requirements are a good candidate for a floating-point digital signal processor architecture.