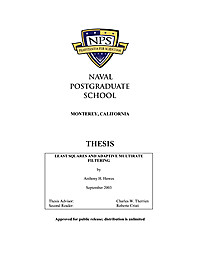 This thesis addresses the problem of estimating a random process from two observed signals sampled at different rates. The case where the low–rate observation has a higher signal–to– noise ratio than the high–rate observation is addressed. Both adaptive and non–adaptive filtering techniques are explored. For the non–adaptive case, a multirate version of the Wiener–Hopf optimal filter is used for estimation. Three forms of the filter are described. It is shown that using both observations with this filter achieves a lower mean–squared error than using either sequence alone. Furthermore, the amount of training data to solve for the filter weights is comparable to that needed when using either sequence alone. For the adaptive case, a multirate version of the LMS adaptive algorithm is developed. Both narrowband and broadband interference are removed using the algorithm in an adaptive noise cancellation scheme. The ability to remove interference at the high rate using observations taken at the low rate without the high–rate observations is demonstrated.