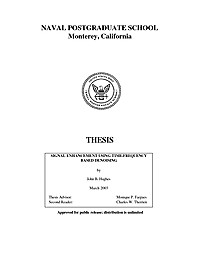 This thesis investigates and compares time and wavelet-domain denoising techniques where received signals contain broadband noise. We consider how time and wavelet-domain denoising schemes and their combinations compare in the mean squared error sense. This work applies Wiener prediction and Median filtering as they do not require any prior signal knowledge. In the wavelet-domain we use soft or hard thresholding on the detail coefficients. In addition, we explore the effect of these wavelet-domain thresholding techniques on the coefficients associated with cycle-spinning and the newly proposed recursive cycle-spinning scheme. Finally, we note that thresholding does not make an attempt to de-noise coefficients that remain after thresholding; therefore we apply time domain techniques to the remaining detail coefficients from the first level of decomposition in an attempt to de-noise them further prior to reconstruction. This thesis applies and compares these techniques using a mean squared error criterion to identify the best performing in a robust test signal environment. We find that soft thresholding with Stein’s Unbiased Risk Estimate (SURE) thresholding produces the best mean squared error results in each test case and that the addition of Wiener prediction to the first level of decomposition coefficients leads to a slightly enhanced performance. Finally, we illustrate the effects of denoising algorithms on longer data segments.