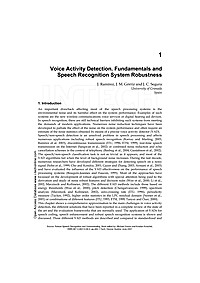 An important drawback affecting most of the speech processing systems is the environmental noise and its harmful effect on the system performance. Examples of such systems are the new wireless communications voice services or digital hearing aid devices. In speech recognition, there are still technical barriers inhibiting such systems from meeting the demands of modern applications. Numerous noise reduction techniques have been developed to palliate the effect of the noise on the system performance and often require an estimate of the noise statistics obtained by means of a precise voice activity detector (VAD). Speech/non-speech detection is an unsolved problem in speech processing and affects numerous applications including robust speech recognition, discontinuous transmission, real-time speech transmission on the Internet or combined noise reduction and echo cancellation schemes in the context of telephony. The speech/non-speech classification task is not as trivial as it appears, and most of the VAD algorithms fail when the level of background noise increases. During the last decade, numerous researchers have developed different strategies for detecting speech on a noisy signal and have evaluated the influence of the VAD effectiveness on the performance of speech processing systems. Most of the approaches have focussed on the development of robust algorithms with special attention being paid to the derivation and study of noise robust features and decision rules. The different VAD methods include those based on energy thresholds, pitch detection, spectrum analysis, zero-crossing rate, periodicity measure, higher order statistics in the LPC residual domain or combinations of different features. This chapter shows a comprehensive approximation to the main challenges in voice activity detection, the different solutions that have been reported in a complete review of the state of the art and the evaluation frameworks that are normally used. The application of VADs for speech coding, speech enhancement and robust speech recognition systems is shown and discussed. Three different VAD methods are described and compared to standardized and recently reported strategies by assessing the speech/non-speech discrimination accuracy and the robustness of speech recognition systems.