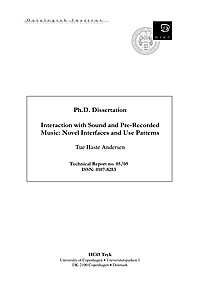 Interaction with Sound and Pre-Recorded Music: Novel Interfaces and Use Patterns

Computers are changing the way sound and recorded music are listened to and used. The use of computers to playback music makes it possible to change and adapt music to different usage situations in ways that were not possible with analog sound equipment. In this thesis, interaction with pre-recorded music is investigated using prototypes and user studies. First, different interfaces for browsing music on consumer or mobile devices were compared. It was found that the choice of input controller, mapping and auditory feedback influences how the music was searched and how the interfaces were perceived. Search performance was not affected by the tested interfaces. Based on this study, several ideas for the future design of music browsing interfaces were proposed. Indications that search time depends linearly on distance to target were observed and examined in a related study where a movement time model for searching in a text document using scrolling was developed. Second, work practices of professional disc jockeys (DJs) were studied and a new design for digital DJing was proposed and tested. Strong indications were found that the use of beat information could reduce the DJ’s cognitive workload while maintaining flexibility during the musical performance. A system for automatic beat extraction was designed based on an evaluation of a number of perceptually important parameters extracted from audio signals. Finally, auditory feedback in pen-gesture interfaces was investigated through a series of informal and formal experiments. The experiments point to several general rules of auditory feedback in pen-gesture interfaces: a few simple functions are easy to achieve, gaining further performance and learning advantage is difficult, the gesture set and its computerized recognizer can be designed to minimize visual dependence, and positive emotional or aesthetic response can be achieved using musical auditory feedback.