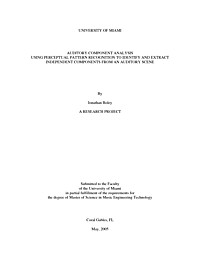 The cocktail party effect, our ability to separate a sound source from a multitude of other sources, has been researched in detail over the past few decades, and many investigators have tried to model this on computers. Two of the major research areas currently being evaluated for the so-called sound source separation problem are Auditory Scene Analysis (Bregman 1990) and a class of statistical analysis techniques known as Independent Component Analysis (Hyvärinen 2001). This paper presents a methodology for combining these two techniques. It suggests a framework that first separates sounds by analyzing the incoming audio for patterns and synthesizing or filtering them accordingly, measures features of the resulting tracks, and finally separates sounds statistically by matching feature sets and making the output streams statistically independent. Artificial and acoustical mixes of sounds are used to evaluate the signal-to-noise ratio where the signal is the desired source and the noise is comprised of all other sources. The proposed system is found to successfully separate audio streams. The amount of separation is inversely proportional to the amount of reverberation present.