Yet Another FIR design algorithm

This code "snippet" will design FIR filters, simple ones and rather complex ones, too.
It may still succeed, where remez() runs into convergence problems. I haven't observed any such issues yet for realistic requirements.

The algorithm is also quite accessible (the Remez method is not for the faint-of-heart), making it useful for non-standard design problems that require customized programming.

I'll give here only a brief summary of the algorithm, since it's extensively documented in the code. I'm planning to write a blog entry on the topic later.

At this point, the FIR coefficients give the LMS-optimum FIR that maps solverAtInput to solverAtOutput.
Unfortunately, this "optimal" filter performs very well on frequencies where success comes easy, and neglects other frequencies, where improvement is more costly (see the "basicLMS" example for actual output).
As a result, the filter quality at transitions or band edges does not meet requirements, while the bulk of the frequency response exceeds them.

To address this issue and obtain equiripple results instead of LMS-optimal ones, the LMS solver is wrapped into an iteration loop as follows:

Now there isn't too much need to understand any of the above, as long as the task at hand is only to design a FIR filter that meets given requirements. Simply run the program, edit as needed, and check that the output is meaningful (look out for excessive gain and wildly oscillating FIR taps with large absolute value).
Fortunately, verifying a FIR filter is much easier than designing one.

For design requirements that are very close to what is achievable, the resulting design will be essentially equiripple (that is, all "bumps" in frequency response and error vector magnitude "touch" the requirement, or at least come close).
If the targets can be exceeded, the remaining freedom will be used (mostly) for LMS optimization. At first glance, it looks like sloppy work, when EVM and passband ripple start to "sag". But in many applications, a LMS optimization does make sense, beyond the point where requirements are met. See the "basic" and "basicLMS" demos for more details.

If equiripple is preferable, tighten the filter requirements iteratively, to the point where they are barely achievable. Results will approach equiripple, even though some bands may steadfastly refuse to deteriorate, if it doesn't gain an improvement elsewhere.

There is no guarantee that the iteration will converge to a global optimum. Small changes to the input of the LMS solver may result in an abrupt change in the placement of zeros, making the weighting factors meaningless.

Many other filter design methods aren't optimal, so this is not necessarily an issue for practical use.

If anybody can provide an example that shows non-optimality against a better design, I'd be very interested.

For now, all documentation is in the code. A number of complete, heavily documented design examples are included.

It may be also a good idea to look deeper into the functions, if needed. There are more comments and also a couple of plots that can be enabled.

Location of the core algorithm

Most of the code is "infrastructure" that provides a user interface to the second half of LMSFIR_stage3_run().
The essential part can be found in said function, enclosed within

for Iter ... pinv() ... end
All signals are cyclic (infinite duration in the time domain, a finite Fourier series in the frequency domain).
Due to the cyclic nature, FFT and IFFT allow to go back and forth between time / frequency domain without any signal degradation other than numerical error. There is no need for any windowing, since the signal never starts or stops.
Further, causality is not an issue, time just wraps around.
Time domain variable names use the _td postfix, and _fd is used for frequency domain.

While I've been using the core algorithm for quite a while now, this code snippet is a complete clean rewrite.
If you run into bugs, kindly let me know.

It is supposed to work on both.

All examples are included and can be called from the first few lines of the code snippet.
Simply uncomment one demo(...) line at a time and run.

In the plots below, the red trace gives the magnitude of the error vector, EVM (output signal minus input signal).
Ripple requirements are translated into EVM for plotting passband ripple and stopband rejection in one diagram. 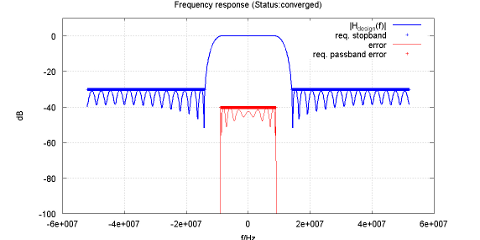 Fig.1: simple lowpass design example.
A filter to the same specifications can be designed with remez(). The filters are almost identical. Fig. 2 shows the impulse responses of both designs. 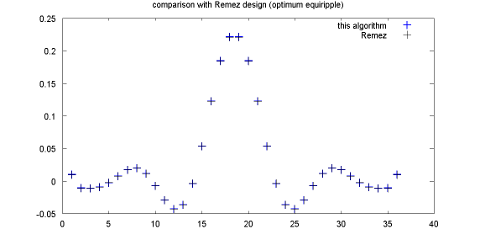 Uses the same target settings as the "basic" demo, but does not iterate to achieve an equiripple solution.
The resulting design does not meet the requirements at pass- and stopband edge.
Given that the overall performance of the LMS design for a noise-like signal is about 5 dB better than the equiripple design in Fig. 1, this example illustrates that equiripple may come at a steep price, compared to LMS.
It also shows where the requirements are most "expensive": For example, raising either stop- or passband requirement at the edge slightly, or a small change in the band edge frequency, would significantly reduce the number of taps or improve performance elsewhere. 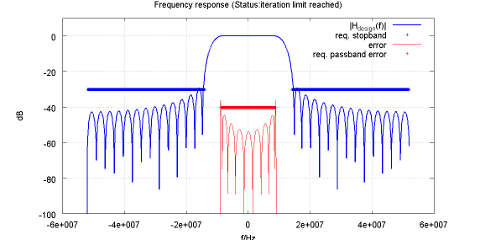 Fig 3: The same as the "basic" example, but LMS solution instead of equiripple 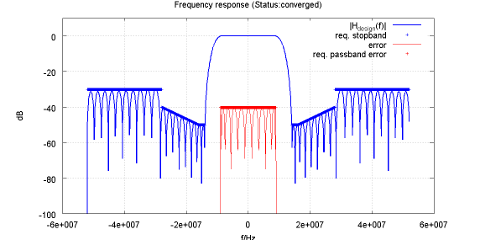 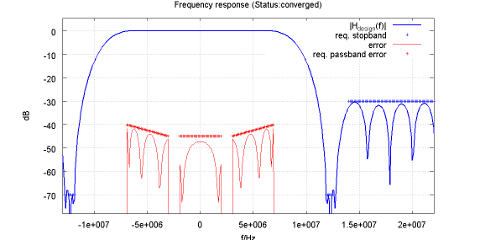 The frequency response in this example "runs away", because it is unconstrained around -40 MHz.
This problem can be solved by using a couple more taps and placing a "soft" stopband, for example 0 dB, in the "don't-care" regions. 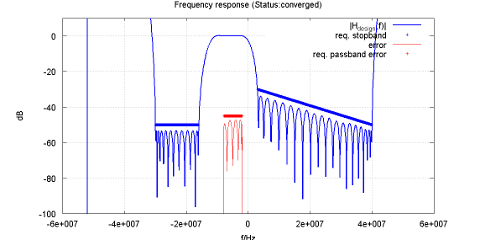 Designs a filter with a root-raised cosine response for WCDMA cellular. 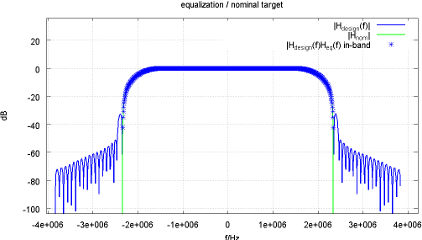 In this example, the response of a 6th order Laplace-domain Chebyshev lowpass is modeled by a FIR filter.
Modeling IIR with FIR is a straightforward exercise, as long as the allowed number of taps is large. This is the case for wideband IIRs with short impulse response, and / or modest accuracy requirements: If possible, simply sample the impulse response, apply some windowing function and we're done (here is a discussion on textbook methods).
A general problem with IIRs is that the impulse response decays exponentially: Over time, it drops slower and slower. Reducing the truncated "tail" by using more taps may become impractical.
If so, a little bit of extra effort is required, as this example shows: 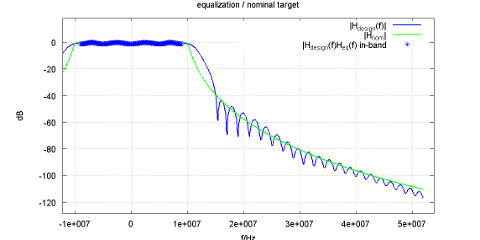 The model in this example carefully approximates the in-band response, for example to test a digital equalizer (Fig. 8 and 9). The model is phase-accurate within +/- 9 MHz.
The transition area around 12 MHz is left as "don't-care" region and therefore inaccurate.
The wide-band amplitude response is modeled using straight-line stopband requirements. The order of magnitude is more or less correct, but the model is not phase-accurate. 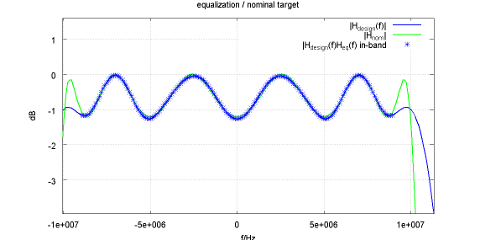 To add a twist to the previous example, let's assume the component model is meant for use in a radio receiver that attempts to demodulate a strong adjacent channel, even though it's on the edge of the analog filter.
A meaningful filter model needs to be phase-accurate in the frequency range in question. One solution is to add a second passband to the design script.
Note that since the gain ranges from -40 dB to -50 dB, the error vector requirement needs to be scaled down accordingly, to achieve a comparable signal quality as in the passband 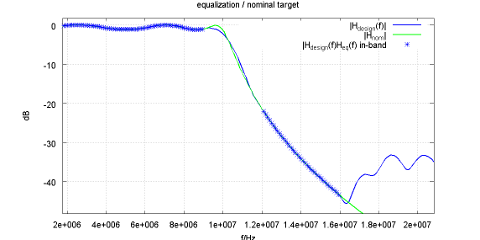 Fig. 10: FIR design to match a given frequency response in multiple passbands 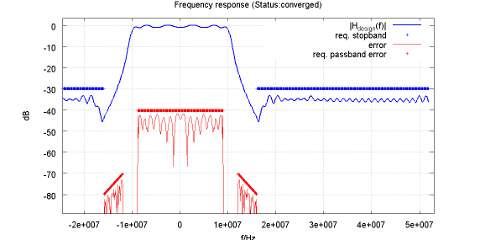 Fig. 11: EVM needs to be scaled relative to the passband gain to maintain signal quality 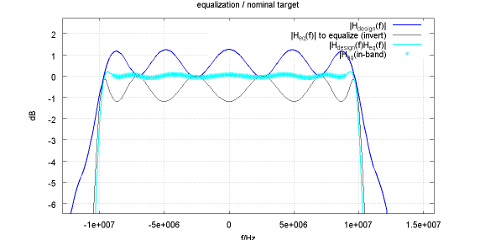 Fig. 12: Equalizing a given frequency response

Similar to the filter modeled in demo("component"), but now the filter is equalized instead of being used as nominal frequency response.

As the light blue trace shows, the frequency response that results from placing both filters in series is nearly flat. And, while not visible in the plots, also the phase is equalized. Since the equalizer is nonlinear phase, its impulse response is asymmetric and the group delay becomes a free parameter.
It is recommended to try different values and find the optimum. The performance is usually weakly periodic on a one-sample grid, because a "bad" value for the group delay effectively forces the equalizer to implement additional fractional delay that collapses to a unity sample at the optimum group delay.

Here is a link to a discussion thread on comp.dsp.

Getting the code snippet

The code below can be also downloaded here / change log.
If using copy / paste, place it into a file named LMSFIR.m and run LMSFIR from the Matlab / OctaveForge command line.