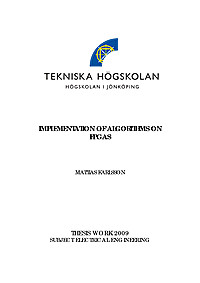 Implementation of Algorithms on FPGAs

This thesis describes how an algorithm is transferred from a digital signal processor to an embedded microprocessor in an FPGA using C to hardware program from Altera. Saab Avitronics develops the secondary high lift control system for the Boeing 787 aircraft. The high lift system consists of electric motors controlling the trailing edge wing flaps and the leading edge wing slats. The high lift motors manage to control the Boeing 787 aircraft with full power even if half of each motor’s stators are damaged. The motor is a PMDC brushless motor which is controlled by an advanced algorithm. The algorithm needs to be calculated by a fast special digital signal processor. In this thesis I have tested if the algorithm can be transferred to an FPGA and still manage the time and safety demands. This was done by transferring an already working algorithm from the digital signal processor to an FPGA. The idea was to put the algorithm in an embedded NIOS II microprocessor and speed up the bottlenecks with Altera’s C to hardware program. The study shows that the C-code needs to be optimized for C to hardware to manage the up speeding part, as the tests showed that the calculation time for the algorithm actually became longer with C to hardware. This thesis also shows that it is highly probable to use an FPGA equipped with Altera’s NIOS II safety critical microprocessor instead of a digital signal processor to control the electrical high lift motors in the Boeing 787 aircraft.