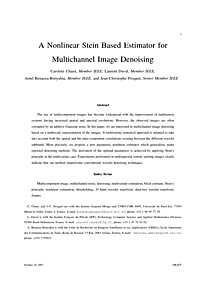 A Nonlinear Stein Based Estimator for Multichannel Image Denoising

The use of multicomponent images has become widespread with the improvement of multisensor systems having increased spatial and spectral resolutions. However, the observed images are often corrupted by an additive Gaussian noise. In this paper, we are interested in multichannel image denoising based on a multiscale representation of the images. A multivariate statistical approach is adopted to take into account both the spatial and the inter-component correlations existing between the different wavelet subbands. More precisely, we propose a new parametric nonlinear estimator which generalizes many reported denoising methods. The derivation of the optimal parameters is achieved by applying Stein’s principle in the multivariate case. Experiments performed on multispectral remote sensing images clearly indicate that our method outperforms conventional wavelet denoising techniques.