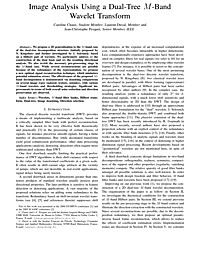 We propose a 2D generalization to the M-band case of the dual-tree decomposition structure (initially proposed by N. Kingsbury and further investigated by I. Selesnick) based on a Hilbert pair of wavelets. We particularly address (i) the construction of the dual basis and (ii) the resulting directional analysis. We also revisit the necessary pre-processing stage in the M-band case. While several reconstructions are possible because of the redundancy of the representation, we propose a new optimal signal reconstruction technique, which minimizes potential estimation errors. The effectiveness of the proposed M- band decomposition is demonstrated via denoising comparisons on several image types (natural, texture, seismics), with various M-band wavelets and thresholding strategies. Signicant improvements in terms of both overall noise reduction and direction preservation are observed.