This is an article to hopefully give a better understanding of the Discrete Fourier Transform (DFT) by deriving exact formulas for the frequency of a real tone in a DFT. This time it is a two bin version. The approach taken is a vector based one similar to the approach used in "Three Bin Exact Frequency Formulas for a Pure Complex Tone in a DFT"[1]. The real valued formula presented in this article actually preceded, and was the basis for the complex three bin case.

Once again, the emphasis on exactness has to do with mathematical correctness and theoretical understanding, not necessarily superior performance in a practical application. However, in the two bin case I know of no approximation formulas that are computationally simpler and/or more robust. The first exact two bin real tone formula I am aware of was presented by Martin Vicanek[2]. He made the observation that the two bin case is actually overdetermined and should be solvable. Shortly after that I derived one that was based on the approach I took with my original three bin version [3]. Being exact, it worked fine in the noiseless case, but performed poorly compared to Vicanek's in the presence of noise. Consequently I have not published it.

In response to another comp.dsp thread earlier this year in which Michael Plet presented another two bin formula [4], I revisited the topic and derived the approach presented in this article. The first version was comparable to Vicanek's, but slightly worse. An adjustment made to the formula made it slightly better. All three are significantly better than my original attempt.

This is the same real pure tone formula I use in all the blog articles. The frequency term ($\alpha$) is expressed in units of radians per sample which makes the formula as simple as possible. $$ S_n = M \cos( \alpha n + \phi ) \tag {1} $$ The frequency in the formula can readily be converted from units of cycles per frame using this formula: $$ \alpha = f \cdot \frac{ 2\pi }{ N } \tag {2} $$ The frequency in Hz (cycles per second) depends on the duration of the sampling frame.

Separating into Real and Imaginary Parts

A System of Equations Using Another Bin

A System of Equations In Vector Form

Solving for the Frequency Term

Notice that since it is in the numerator and the denominator as a linear factor, the length of $\vec K$ is irrelevant. All that matters is its direction. Since it is constrained to lay within a plane it has one degree of freedom. $$ f = \alpha \cdot \frac{ N }{ 2\pi } = \cos^{-1} \left( \frac{ \vec K \cdot \vec B }{ \vec K \cdot \vec A } \right) \cdot \frac{ N }{ 2\pi } \tag {24} $$ The value given by this equation is a frequency within the range of the DFT. It is possible that the actual frequency is an alias frequency. That is a frequency that is higher than the Nyquist frequency.

These tests consist of taking a sweep of frequencies from the low end of a bin to the high end. For each frequency a real tone is generated. The phase is swept from zero to $2\pi$. The formulas are evaluated using the same data sets. The Unadjusted column does not have the $\sqrt{2}$ rescaling of (16).

Just like the complex case, the two bin formulas do best when the frequency is between two bins. This is due to the frequency formula being in essence the result of a weighted average of the two bin values. When the weighting is most even, the combination of the random variables has the least variance.

A solid formula for the calculation of the frequency of a single pure tone from DFT bin values has been presented. There is no guarantee that it is the optimal one. First because the selection of vector $\vec D$ was somewhat arbitrary. Secondly, no special calculations were made to find out information about the nature of the error terms.

[3] Dawg, Cedron, Exact Frequency Formula for a Pure Real Tone in a DFT

[6] Dawg, Cedron, The Exponential Nature of the Complex Unit Circle

Therefore (2) in units form is:

This is a good place to point out these units are the same for equation (4).  To me, this unlocks the true meaning of (3), which is the definition of the DFT.  Looking at the exponent, $n$ is the sample index so it has units of samples and $\beta_k$ has units of radians per sample.  Therefore their product has units of radians.  As you know, Euler's equation translates the distance along the circumference of the unit circle to a complex point value on the plane.  The negative sign means the distance is measured clockwise on the circle.

The net result is that the $e^{-i \beta_k n }$ term represents an evenly spaced set of points around the unit circle and the spacing between the points is defined by $\beta_k$.  Each point is weighted by the corresponding signal value.  The weighted points are then summed and divided by the number of points.  Therefore, the DFT is actually a center of mass calculation of a weighted set of points around the unit circle.

The multiplication of the signal value ($S_n$) can either be interpreted as a weighting as I did in the previous paragraph, or as a length multiplier as I did in my second blog article:  "DFT Graphical Interpretation: Centroids of Weighted Roots of Unity."
[ - ]
Comment by AnwesaRoy●October 16, 2017 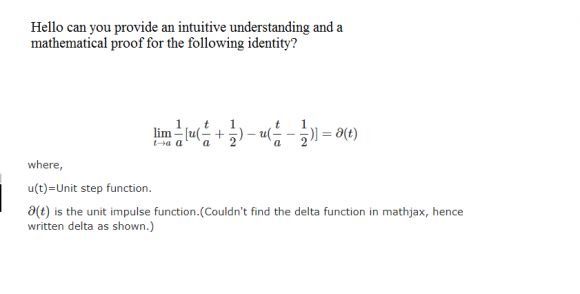 This question is kind of off topic for this blog entry, you should post it in the forums section instead.  You'll get more answers than just mine.

I don't think you have the equation correct, but I do get the gist of it.

The Dirac delta function is zero everywhere except at a certain point where it has the value of infinity.  When you integrate over that point the value is one.  I think what you are trying to depict is a function that is zero everywhere except a small interval where it is a constant height, the height being defined so that the area of the rectangle that is formed is one.  The limit of such a function as the width approaches zero is the Dirac delta function.

P.S.  Mathjax works within the comment section and the forum.

The equation I think you want is:

Yes sir, you are right, I made a mistake. Sir is there anyway I can notify you if I post my queries in the forum?

You can contact me either through DspRelated or directly by email using the email address I just put in the "About Cedron Dawg" section on the right hand side of this page.

Cedron Dawg is the pen name of a reclusive math enthusiast and programmer. His primary interest is in the Discrete Fourier Transform having discovered numerous new equations which are documented in the blog articles, with more to come. For non-members of DspRelated he can be contacted at cedron at protonmail dot com. Members can click on the envelope icon below.