This blog presents a novel method for simultaneously implementing a digital differentiator (DD), a Hilbert transformer (HT), and a half-band lowpass filter (HBF) using a single tapped-delay line and a single set of coefficients. The method is based on the similarities of the three N = 15-sample impulse responses shown on the left side of Figure 1. (The equations used to compute the impulse responses are given later in this blog.)

On the right side of Figure 1 we show the frequency responses of a typical DD, HT, and HBF.

Thinking of the above impulse response samples as tapped-delay line coefficients we see that a HBF's coefficients (with the exception of its center coefficient) and a HT's coefficients are all contained in the N-point DD's coefficients. These relationships lead us to the proposed simultaneous processing scheme shown in Figure 2 for N = 15. 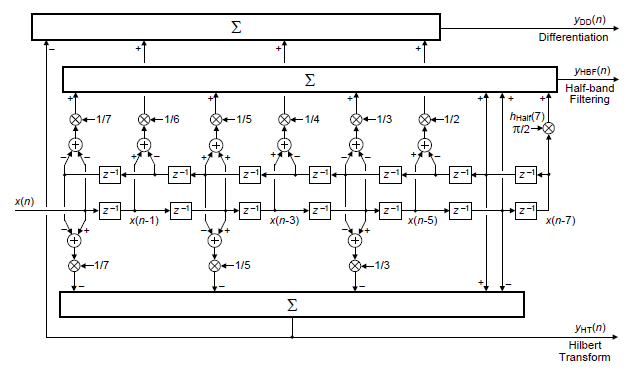 The system in Figure 2 is the primary topic of this blog. If this system interests you, please read on.

When a unit sample is our input in Figure 2 the system's three impulse response outputs are those shown on the left side in Figure 1. If half-band lowpass filtering is not needed, Figure 3 shows the simultaneous implementation of a DD and a HT for N = 15.

Not only do the systems in Figures 2 and 3 perform the described simultaneous processing, they do so in a surprisingly efficient manner as described in Appendix A.

Another benefit of the Figure 2 and 3 processing is that only one set of precomputed coefficients need be stored in hardware memory.

The impulse response samples shown in Figure 1 (and later the coefficients in Figures 2 and 3) are obtained as follows: the coefficients of a standard N-point (N is odd) wideband DD (See references [DD_1-DD_3]) are

Next, if we multiply the standard textbook N-point digital HT's coefficients (See references [HT_1-HT_4]) by π/2 we obtain our scaled HT coefficients of

Finally, if we multiply the coefficients of a traditional N-point digital HBF (See references [HBF_1-HBF_3]) by π we obtain our scaled HBF coefficients of

For our Figure 2 processing, Eq. (3)'s hHBF(M) center coefficient is set equal to π/2. The passband gain of our HBF process is π.

A nice feature of the Figures 2 and 3 systems is that any modification made to reduce the frequency-domain passband gain ripple of the Eq. (1) hDD(n) coefficients automatically reduces the ripple in the HT's and HBF's frequency magnitude responses.

For example, the dotted red curve in Figure 4(a) shows the frequency magnitude response of the Eq. (1) DD's hDD(n) coefficients. Multiplying hDD(n) by a Hanning window sequence produces the reduced-ripple magnitude response shown by the solid black curve. We can see that windowing the DD's Eq. (1) coefficients reduces the HT's and the HBF's passband ripple as shown by the solid black curves in Figures 4(b) and 4(c). 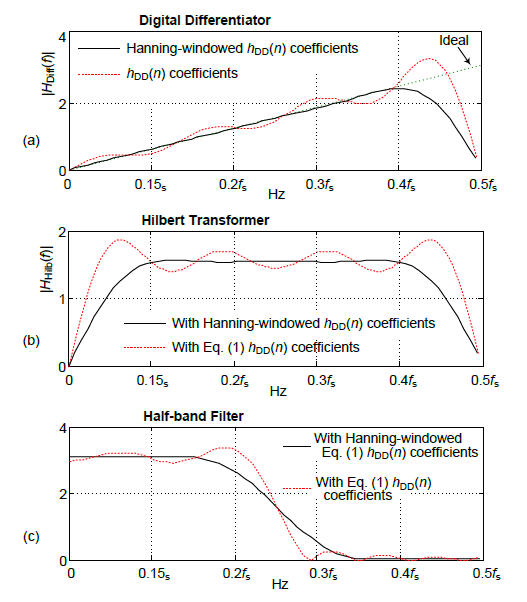 It's also acceptable to use the Parks-McClellan, or some other, DD design method to obtain new hDD(n) coefficients that have improved frequency-domain behavior. However, when using hDD(n) coefficients other than those defined by Eq. (1) care must be taken to ensure that the HBF's hHBF(M) center coefficient (the π/2 on the right side of Figure 2) be set equal to π/2 times the new differentiator's hDD(M-1) coefficient.

We presented methods for performing simultaneous digital differentiation, Hilbert transformation, and half-band lowpass filtering. The methods are computationally efficient and require a minimum of coefficient storage. To borrow a slogan from the Aston Martin automobile company, the processing in Figures 2 and 3 are "engineered to exceed all expectations."

Here we describe the favorable computational efficiency of the Figures 2 and 3 systems. 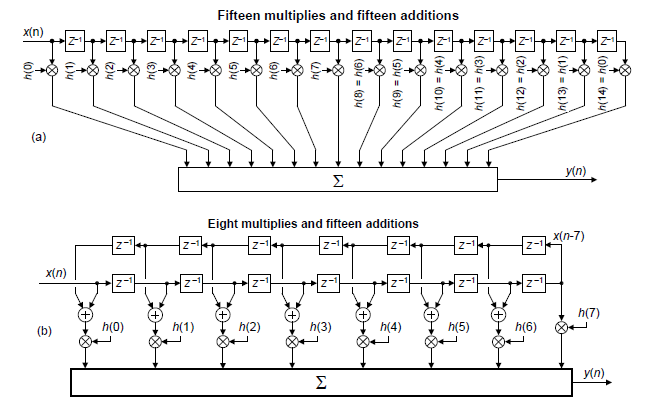 Table A-1: Necessary Computations, Per Input Sample, For N = 15 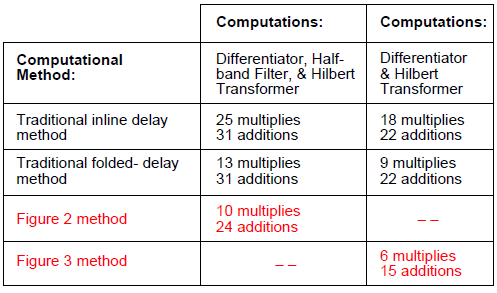 The bottom three rows of the table show us that the proposed Figure 2 and 3 systems are more computationally efficient than the popular folded-delay line processing method. And, happily, for N > 15 (a larger number of coefficients) the Figure 2 and 3 systems' computational advantages over the traditional folded-delay implementation become even more pronounced beyond that of the N = 15 case.

One must be careful to scale the input and all the nodes correctly. Otherwise, overflow can occur at one or more of the nodes. Extra care is needed when "folding" or other simplification schemes are used, as those nodes are "stressed" higher then the others.

Of course, the usual approach is to "waste bits" by having "excess precision". But that can negate the efficiency one is attempting to achieve. For example, having to use double precision for a multiply requires 4 single-precision multiplies to accomplish.

Hi bpark1000,
I'm not sure what it means for a node to be "stressed", but my Figures 2 and 3 systems require no more computational precautions than any other traditional tapped-delay line filtering or matched filter process.