Some Thoughts on a German Mathematician 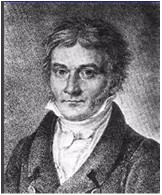 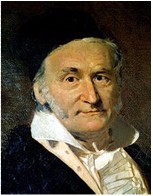 Here are a few interesting facts about the great Carl Friedrich Gauss (1777-1855), considered by some historians to have been the world's greatest mathematician. The overused phrase of "genius" could, with full justification, be used to describe this man. (How many people do you know that could have discovered the law of quadratic reciprocity in number theory at the age seventeen years?) Gauss was so prolific that by some estimates he personally doubled the amount of mathematical knowledge in Europe during his lifetime.

Carl's skill was obvious at an early age. Gauss' father, a construction foreman in Braunschweig Germany, recalled an occasion where he was tallying the wages of his team of bricklayers on a piece of paper while young Carl was standing nearby. Carl, after watching his father, tugged at his dad's clothes and said that the payroll numbers were incorrect. The older Gauss rechecked his calculations and indeed found an error in addition. Carl Gauss was five years old at the time. To showcase Gauss' talents:

• At the age of 14 while mastering geometry, algebra, logarithms, and calculus, Carl learned to speak Greek, Latin, French, Danish and English.

• At the age 22, Gauss rewarded Europe's mathematicians with a long sought after proof of the fundamental theorem of algebra; that every equation has as many solutions as its degree.

• His pioneering work in probability theory is honored by attaching his name to the "Gaussian" (Normal) probability density curve.

• His work in electricity is commemorated by naming "gauss" as the unit of magnetism, as well as the term "degaussing" to mean the demagnetizing of naval ships (and early models of color televisions).

• Gauss' algebraic efforts led him to propose a geometrical way of looking at complex numbers. His idea was the venerable concept of representing a complex number as a point on a complex plane. (A powerful notion that profoundly aided our understanding of vector algebra and much physical-world analysis.)

• His work on non-Euclidean geometry (with his student Bernhard Riemann) led to a concept of multiplying expressions for maximum and minimum curvatures to define the true curvature of a point on a surface. This product is called the "Gaussian curvature".

• Astoundingly, Gauss (and a colleague Wilhelm Weber) built and used a telegraph system two years before the American Samuel Morse applied for the original patent in 1840.

When Gauss was 23, an Italian astronomer (Joseph Piazzi) had discovered the large asteroid Ceres. The learned people of Europe, excited by the thought of a new planet, were further titillated by the fact that the asteroid disappeared into a bright section of the sky near the Sun. Europe's astronomers had lost their asteroid, and much controversy was stirred about how to find it again. With only a few data values describing the asteroid's previous positions, no astronomer could ever hope to calculate its future position in the heavens. The arithmetic was just too overwhelming. Up stepped Gauss. After two weeks work on the problem, Carl publicized a prediction of the asteroid's entire orbit. When the astronomers aimed their telescopes at Gauss' target, you can guess what happened. There it was, that "clod of dirt" as Gauss called it. This feat made Carl famous throughout the European academic community.

My favorite story about Carl concerns the time he committed some minor misdeed in grade school and, as punishment, his teacher told the Gauss to sit down and add all the integers from 1 to 100. The Carl hesitated for a few moments and, to the teacher's astonishment, wrote down the number 5050. Gauss realized that the sum of the first and last numbers (1+100) was 101, the sum of the second and the next to the last numbers (2+99) was 101, the sum of the third and the third from the last numbers (3+98) was 101, and so on. Because there were 50 such number pairs, Carl multiplied 50 x 101 in his head to obtain 5050. (Legend has it that Carl, as he wrote down the answer, declared "There it lies.") That's when Gauss' instructor first notified his colleagues that this 10-year old boy has "some mathematical talent."

So why should a DSP engineer be interested in this German mathematician? Well, there's some indication that the Fourier transform, that we've all spent so much time studying, should have been called the Gauss Transform. That's because math historians have discovered that Gauss was developing a method for representing any function by a trigonometric series before Joseph Fourier (1768-1830) formalized the idea in 1807. "Gauss Transform" huh? Works for me.

I have heard about some of the feats of Gauss before, but not everything that's been mentioned in this blog. So this raises the fundamental question, is this inborn ingenuity that's inherent in some people or is this type of talent present in each one of us, but sometimes never "sees the light of day" because we don't nurture it?? They say its always good to dream and i'm gonna dream that I'll be 1/10th the genius of what Gauss was in my next birth :p.. Thanks for sharing Rick..
[ - ]
Comment by steveu●January 10, 2010

If you list the people who genuinely did more than one interesting and original thing in their lives you get Newton, Gauss, and then quickly start to struggle for other names. People definitely see further by standing on his shoulders.
[ - ]
Comment by Assous●January 11, 2010