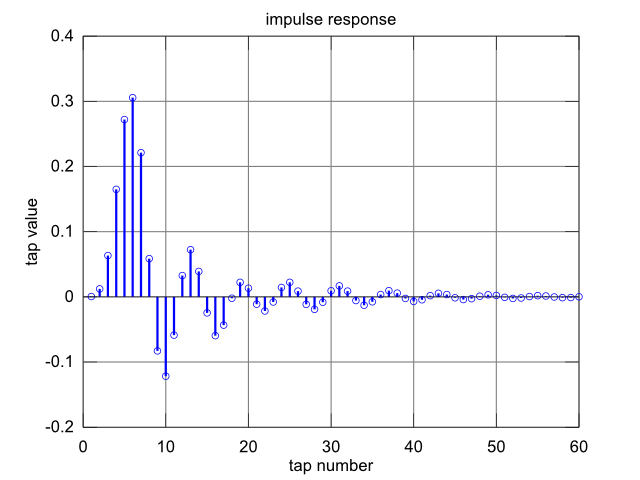 Background
Frequently, digital signal processing is designed together with analog filtering. For example:

Since analog filtering is expensive, power-consuming and subject to component tolerances, the nonidealities introduced by an analog filters are typically far from negligible and need to be taken into account, when designing the digital part. For example, a digital equalizer is frequently used to compensate ripple and group delay variation of the analog filter.

”True” continuous-time modeling is cumbersome (step-wise integration of the differential equations in a circuit simulator, for example). A more practical approach is to derive a discrete-time model for the analog component. This code snippet shows, how it can be done.

In general, the problem of designing a discrete-time (z-domain) filter to match a continuous-time (s-domain) prototype has been studied extensively. There is a variety of methods, for example using predistorted bilinear transform, impulse response invariance or least-squares frequency response approximation - see demo(”componentmodel”).

An alternative approach is to sample the impulse response of the analog component and model it in discrete time with an off-the-shelf FIR filter. While this is clearly sub-optimal, the main advantage is simplicity.

Most if not all analog filters exhibit an exponentially decaying impulse response, thus the infinite-length IR has to be truncated to a finite number of FIR coefficients.

Simply discarding the ”tail” is equivalent to applying a Dirichlet window: It minimizes the LMS error over the whole bandwidth, but causes strong ”smearing” of the error all across the frequency response. As a result, the relative accuracy in stop-bands suffers, because the (small) error carries over to frequencies, where the filter's nominal frequency response is small.

Other window functions can be used. The problem is the same as windowing in spectral analysis, and a whole catalog of windowing functions is extensively documented in the literature.

The choice of window is a trade-off: Generally speaking, more aggressive windowing will increase the overall error, but keep it localized in frequency near areas of strong passband response.

More often than not, the main interest lies in the passband of the analog component, not the stopband. If so, ”no window” (Dirichlet) is the best choice: Don't fix it if it ain't broken.

Note that if the known impulse response were noisy, windowing would be motivated also by the need to track the time-varying signal-to-noise ratio.

While excessive windowing (magenta) reduces stopband ripple, it introduces error at the passband edge that is clearly visible. A small amount of windowing (red) seems like a good compromise, depending on the application. 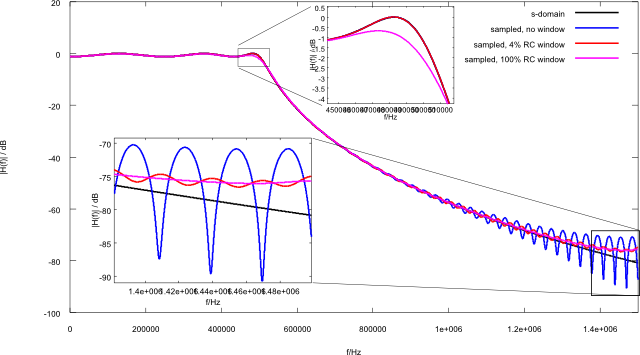 ”Catch 22” applies (also known as time-bandwidth product): Unless the frequency response |H(f)| of the continuous-time model is essentially zero for frequencies beyond the Nyquist limit, the part of the frequency response cannot be simply discarded. Doing so would implicitly enforce an ideal low-pass filter, which is non-causal and requires an excessive artificial group delay and a very long impulse response to approximate. The situation arises even with a lowpass filter, when modeling at a sampling rate that covers only the passband.

The default solution (unless aliasZones is not set to 0) is to introduce artificial aliasing, which greatly reduces the required impulse response length. Conceptually, it is the same as sampling the continuous-time signal before passing it through the analog component. However, be aware that this may distort the frequency response.

In cases where accuracy is required only within a limited bandwidth - for example, to model filter effects on a received channel that is processed at a fractional oversampling ratio - the option BW_Hz can be used to convert the unused bandwidth into a well-defined raised-cosine filter response. 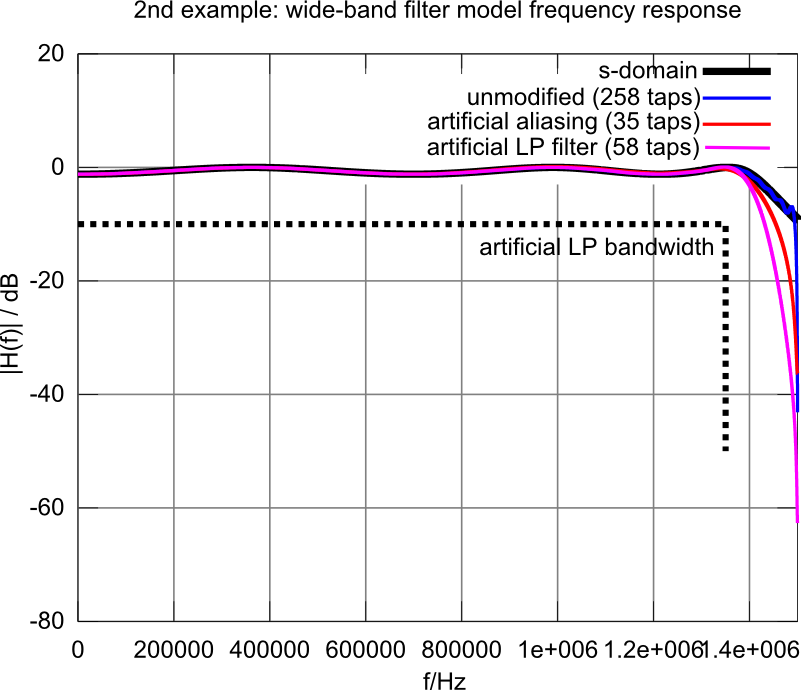 In any case, the algorithm will insert (or remove) group delay as needed, according to the accuracy target. In other words, relative group delay variations are modeled faithfully, but do not rely on the absolute group delay of the model.

For applications such as control systems where a predictable absolute group delay matters, the algorithm can be trivially modified by assigning a fixed value to ixFirst.

Copy into sn_model.m and run sn_model from the command line.

If the application requires only part of the bandwidth, it is possible to apply an arbitrary low-pass response on H, for example (root)-raised cosine. This avoids high-frequency "ringing" in the impulse response and may shorten it considerably for a given accuracy threshold. This can be used as alternative to the "artificial aliasing" approach, especially if the model becomes too inaccurate due to the added aliases.