Stereophonic Amplitude-Panning: A Derivation of the 'Tangent Law'

In a recent Forum post here on dsprelated.com the audio signal processing subject of stereophonic amplitude-panning was discussed. And in that Forum thread the so-called "Tangent Law", the fundamental principle of stereophonic amplitude-panning, was discussed. However, none of the Forum thread participants had ever seen a derivation of the Tangent Law. This blog presents such a derivation and if this topic interests you, then please read on.

The notion of stereophonic amplitude-panning is illustrated in Figure 1. The left and right speakers, both radiating the same audio signal at different amplitudes, are located symmetrically and equidistant from the Listener. (The equidistant speaker location condition ensures that the audio from the two speakers arrives to the Listener in phase.) Speaker gains gL and gR are both scalars in the range of 0 –to- 1, and they determine the energy of the audio radiated by each speaker.

When the two speakers are radiating the same amplitude audio signal (gL = gR) the Listener perceives the audio as originating from the direction aligned with the x‑axis.

Experimentation has shown that when the left Speaker is radiating a higher amplitude audio signal than the Right Speaker (gL > gR) the Listener perceives the audio as originating from the $\theta_A$ direction of the Apparent Speaker shown in Figure 1. This effect is what's called "stereophonic amplitude-panning". And in this context panning means controlling the apparent direction-of-arrival of an audio signal.

The most common expression relating Figure 1's gL and gR gain factors and the $\theta_S$ and $\theta_A$ angles is given in Eq. (1), the so-called "Tangent Law".

The first step in deriving Eq. (1) is to identify three unity-magnitude two-dimensional vectors SL, SR, and A, as shown in Figure 2. Forcing them to be unit-length is important because it allows us to express their x- and y-components as simple trigonometric functions [1,2]. For example, vector SR's x- and y‑components are [cos($\theta_S$), -sin($\theta_S$)] as shown in Figure 2.

Vectors SL, SR, and A. are directed toward the Left, Right, and Apparent speakers respectively.

Next we illustrate the x- and y-components of the SL, SR, and A vectors as shown in Figure 3. 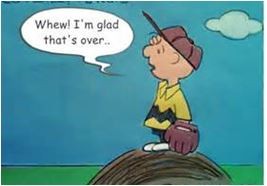 Yes, you're correct. Thanks for catching that typo.

Rick - Thank you for this nice writeup - I plan to use it in my audio class.  I'm confused over the very last equation, the second part of Eqn 14 that says gL = sqrt(1-gR^2).  Shouldn't the relationship between gL and gR always depend explicitly on theta_A? Thank you!  Mark

Good Lord! I've reviewed my Eq. (14) and for the life of me I can't figure out what I was thinking when I entered the right side of that equation. Sheece, that square root term makes no sense to me now.

Mark, I corrected my blog and I've sent a revised PDF file of this blog to Stephane. I say "Thanks a lot" to you for pointing this out to me.

Hi Rick -  Thank you very much for looking into that.  Your writeup is great - I appreciate your taking the time to share this.  Mark

You're most welcome. By any chance will any part of your audio class be on the Internet?

Hi Rick -  I'm sorry for the long silence - I don't regularly check the forum. I just joined and am not in the habit yet!  I have not put any of my current class on the Internet, it's my first time on this particular course and it needs a lot of refinement!  Best, Mark

I understand. Good Luck with your class!