Although the TMS320VC33 serial port was designed to be used as a synchronous port, it can also be used as an asynchronous port under software control. This post describes the hardware and software needed to use a TMS320VC33 serial port as a full-duplex UART port. A schematic diagram and a lengthy code listing are provided to illustrate the solution. This note discusses the implementation of an interrupt-driven, full-duplex, asynchronous serial interface, 9600-baud UART with 8 data bits, 1 stop bit, and no parity using the on-chip resources of the TMS320VC33.

How do I develop a full-duplex, universal asynchronous receive transmit serial interface using the on-chip serial port of the TMS320VC33?

By using the DR0, DX0 pins in conjunction with serial port receive/transmit timers and an external interrupt, one can develop a very flexible full-duplex UART in software, as shown in Figure 1.

The receive sequence begins when the start bit triggers the external interrupt. At the interrupt service routine, c_receive0, the code turns the interrupt off and the receiver on. Then the CPU samples DR0; the data comes in as a normal 8-bit character.

When serial data is input, the receiver shifts the bits into the receive-shift register (RSR). When the specified number of bits are shifted in, the data-receive register (DRR) is loaded from RSR, and the RRDY status bit is set.

After the received byte is processed, the external interrupt is then re-enabled and the system waits for the next start bit.

The stop bits assure the TMS320VC33 has time to handle the data before the next character.

The transmitter basically frames the data into 8-bit words, adding a start bit, the character to send, and the stop bit.  The transmitter then waits until it is free, after which it sends the data. The serial port is set up as a continuous transmit normal port. Frame syncs are not used and internal clocks are used for the serial port timing; these are timed with the TMS320VC33 clock and need to be adjusted if clock rates change.

A more efficient (but more complicated) design definitely could be done. 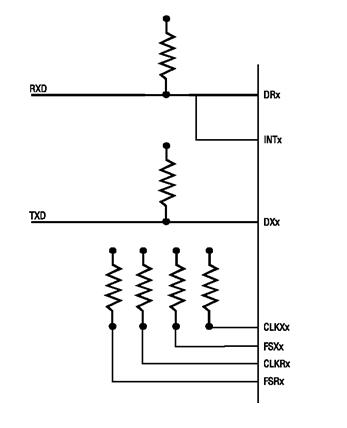 Figure 1. Note that the received signal is tied to DR0 (Data Receive) and also INTx (any of the TMS320VC33 interrupts). The clocks and frame syncs are not used.

; status register. This sets the

; register. Set all the transmit

; register. Set all the receive

; Free run the timer (no hold)

; the receiver, which is a little

; slow. This makes sure we don’t

; shift in time before the bits.

; These also assume a 150MHZ clock

; in the VC33; these values will have

; to be adjusted for different clock

; and int 0 for serial port stuff.

;* c_sp0intTra -     handle an interrupt from the serial port transmitter.

; supposed to be already loaded in R0

;* c_sp0intRec - Handle an interrupt from the serial port receiver to inform it

This code assumes all interrupts services routines are installed.

nice job!!!. I am doing one project but facing some problem to change my C codes to tms320dm processor...so is it possible for you to heip me somehow???

Manuel has a degree in Electronic Engineering at the University of LaSalle Bajio. He was honored as a member of the University’s Academy of Mathematics. He has been working as an embedded software engineer for many years, writing firmware for bare metal custom boards, developing from hardware drivers to user-space libraries. He is a regular professor in universities across the country and enjoys participating in projects from its early stages collaborating in areas of hardware, industrial design, and manufacturing. He currently works for Honeywell as firmware architect in Mexico.