Adaptive beamforming was first developed in the 1960s for radar and sonar applications. The main idea is that signals can be captured using multiple sensors and the sensor outputs can be combined to enhance the signals propagating from specific directions and attenuate (null out) signals from other directions. It has grown immensely in recent years as processors have become faster and cheaper. Today, adaptive beamforming applications include smart speakers (like the Amazon Echo), autonomous vehicles, radars, routers, anti-jam technology for GPS, cochlear implants and much more.  This brief tutorial introduces readers to a fundamental adaptive beamforming algorithm based on the Wiener Filter. As shown by the wide range of applications, adaptive beamforming can be applied to many types of signals. This post assumes the signal is part of the radio frequency (RF) spectrum.

When first learning about adaptive beamformers it is easiest to assume that the receive antenna is ideal, meaning that we assume a perfectly spherical gain pattern with unity gain for a given antenna (in other words, the directionality of the signal doesn’t affect its power or phase). By cleverly combining signals from multiple ideal antennas we create gains and nulls in specific locations. You can think of this like a water balloon. An ideal water balloons is spherical and represents the gain pattern of an ideal antenna. When you squeeze the water balloon, your fingers depress the balloon, creating nulls where your fingers are. However, they also force water in between your fingers, causing the elastic to bulge and creating a gain. The location of the nulls and gains in the apparent antenna pattern (the apparent antenna is the single antenna who’s gain and phase patterns are equivalent to the multi element system) can be placed to minimize interfering signals and to enhance the signal of interest respectively.

Another assumption is that radiated waves originate from an infinitesimally small origin, called a point source, and expand outwards in all directions. As the signal travels further away from the point source it appears to be flatter and flatter. The extreme example of this is our earth. We know the earth is spherical (sorry flat earthers) but it appears flat on the surface because of how large it is. We assume that our antennas are located far enough away from the transmitter that the received waves appear to be flat or planar. This assumption is called the far field assumption.

Let’s work through the example shown in Figure 1. Figure 1 shows a very simple line array consisting of two antennas separated by $Es$. The green planar wave (a flat wave) impinges on the multi-antenna system with angle $\theta$. As can been seen, the planar wave first impinges on antenna $a_0$ and then $a_1$. The extra distance the plane wave travels to cross $a_1$ can be represented as a phase offset. Computing the phase offset is easy and can be done by following two steps:

For step one, I still use the mnemonic SoCahToa. Because we know the length of the hypotenuse, $Es$, and the angle of arrival, $\theta$, we can compute $\ell$ using

The phase offset, typically represented as $\phi$, is found by 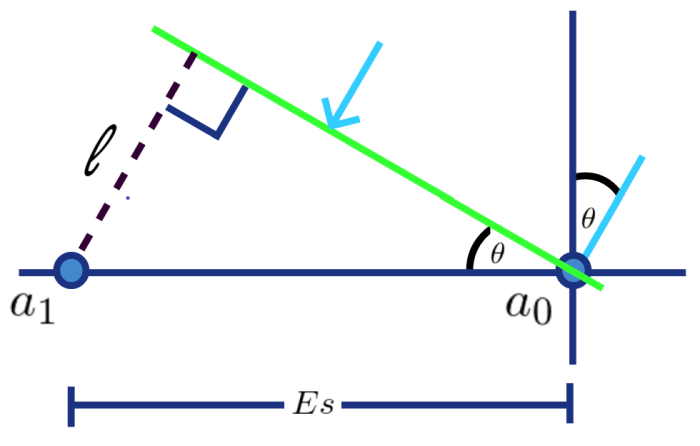 We can now create something called the steering vector. The steering vector simply contains the phase offsets each antenna sees for a given signal propagating from some direction. In our two element example the steering vector is $s(\phi) = [1,e^{-j\phi}]^T$ where $T$ represents transpose. Notice that for the first antenna there is no phase offset. This is because we are computing all offsets with respect to antenna $a_0$.

Now that we have a good understanding of how waves propagate through space and how the angle of propagation affects the phase at the receive antenna, let’s put together a block diagram of our system. Figure 2 shows our system containing a signal of interest (SOI), which is the signal we are trying to receive, and an interferer that is making it hard to sense the SOI. The blocks $C_{soi x}$ and $C_{i x}$ represent the channel through which the SOI and interferer signals travel in order to reach antenna x. Notice that the received signal comprises three components, the SOI, the interferer, and some white noise. Note that we assume the three components are uncorrelated with one another. The phases of the received signal are modified by multiplying by a complex weight and then summed together. Notice that the complex weight is conjugated before being applied to the received signal. 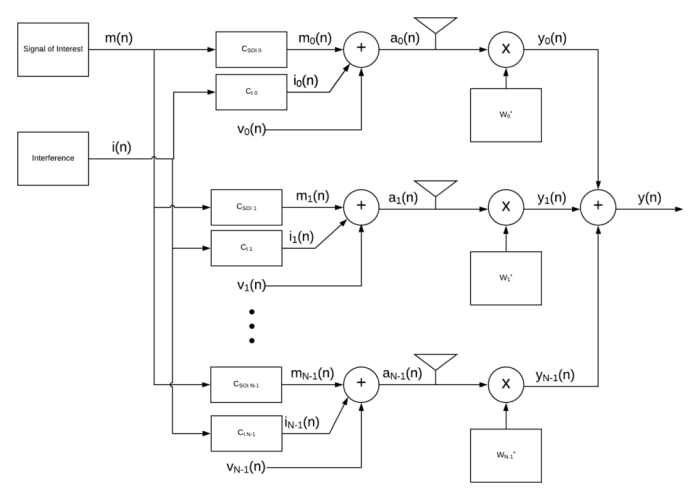 The way to think about setting up the problem is that we want to find the weights that minimize the average power in $y$ while preserving the power emanating from our SOI. Average power is computed by $E\{|y|^2\}$ or $E\{\mathbf{w}^H \mathbf{aa}^H \mathbf{w}\}$ in vector form where $E\{\}$ is the expectation operator which returns the expected value, think average, of a random variable, and $H$ is the Hermitian operator. To preserve our SOI we can set $\mathbf{w}^H \mathbf{s}_{SOI} = 1$, which is essentially saying that all signals propagating from the same angle as our SOI experience unity gain.

where $\mathbf{R}$ is the spatial correlation matrix of received samples.

The numerator is simply the steering vector (the vector containing the phase offsets for a signal propagating in a desired direction) multipliedd by the inverse of the spatial correlation matrix. This creates a vector of weights that's then scaled by the denominator. This solution produces the minimum variance distortionless response (MVDR) beamformer. While the name is a bit of a mouthful it can be broken into two parts to understand. Minimum variance refers to minimizing the power at the output of the beamformer. Remember, the power of a random variable is related to its variance and so minimum variance means smallest power. Distortionless response refers to the fact that the power of the SOI remains the same, it is not attenuated nor gained by going through the beamformer.

To get the gain in a given direction all you need to do is compute the scanning vector for that direction and perform a dot product between the adaptive beamforming weights and the scanning vector. In other words, if $\mathbf{h} = [1, e^{-j\beta}]^T$ where $\beta$ is the phase offset corresponding to signals propagating from the direction you wish to find the gain for, then the gain is found by $\mathbf{w}^H\mathbf{h}$.

Figure 3 shows the spatial gain response of an apparent antenna for an MVDR beamformer with 6 antennas spaced at a half wavelength apart. The SOI's AoA is 90 degrees while the interferer's AoA is 10 degrees. Notice that the MVDR places a deep null in the direction of the interferer while preserving the energy emitted from the direction of the SOI. 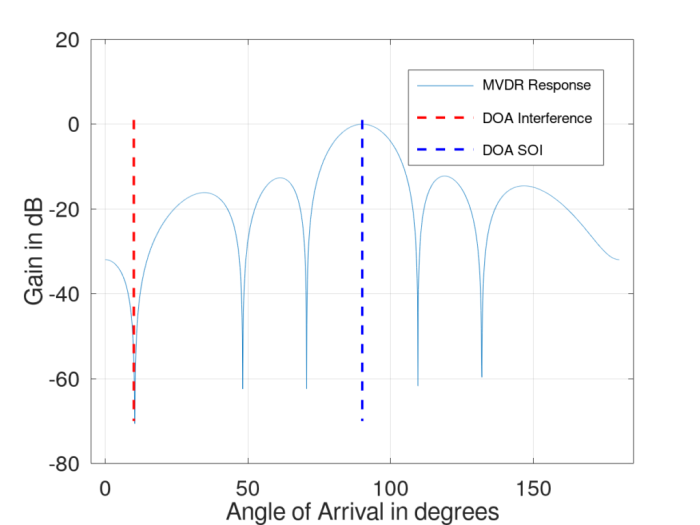 Figure 3: MVDR spatial response using a six-element antenna with an inter-element spacing of half a wavelength. Interference is at 10 degrees with SOI at 90 degrees.

Figure 4 uses the same setup but shows the MVDR spatial gain response for a second interferer placed at 120 degrees. Notice that the gain response adapts to the new circumstance (hence this is an adaptive beamformer). 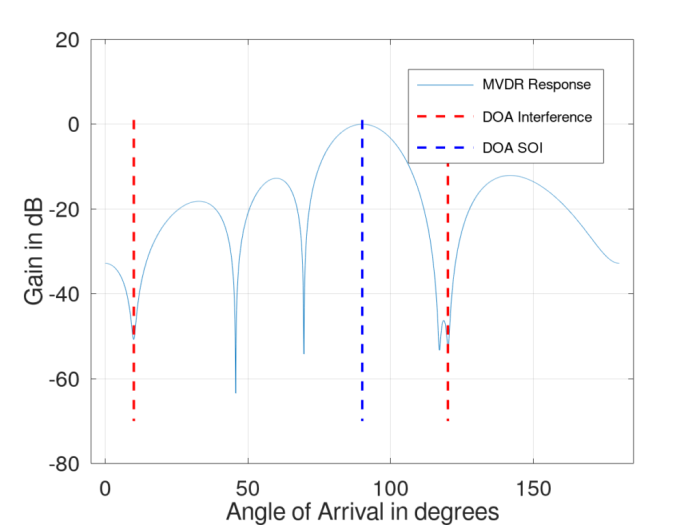 Figure 4: MVDR spatial response using a six-element antenna with an inter-element spacing of half a wavelength. Interference is at 10 degrees and 120 degrees with SOI at 90 degrees.

If the SOI is below the noise floor, then the design could be greatly simplified by using a nuller instead of a beamformer like the one shown here. Nullers do not maintain gain in any direction, they simply try to take out power emanating from any direction, hence the SOI needs to be below the noise floor for this approach to be considered. However, the nuller needs no information about the orientation of the platform, the direction of the SOI, nor precise information about it's antenna locations.

Finally, the number of interferers an adaptive beamformer can remove is estimated to be N-1 where N is the number of antenna elements in the system. Sometimes you can get lucky and a sympathetic null takes one out but that can't be controlled nor relied on. Sympathetic nulls are the nulls created by the adaptive beamformer that are unintended, such as the null at 48 degrees in Figure 3. Lastly, if an interferer is coming from the same direction as the SOI then you can't spatially remove the interference.

While adaptive beamformers do increase the complexity of the system, they should be strongly considered if the interference prevents your system from recovering the SOI. Please list your comments and questions below or point out mistakes.

Thanks for the very useful blog.

Just wondered if you could help in a "basic modelling in matlab" of beam forming for the case below.

Rx: I receive the Tx four elements on one or more Rx antennas and multiply it back by the four phases and add.

I am just curious how to model all such scenarios say in basic matlab code (away from their higher level functions). Moreover is there a way to model the air interface (actual antenna beam forming).

This is just for my personal intuition.

This is a fantastic question! First, instead of rotating the transmitted signal by 0, pi/2, pi, and 3pi/2 I would recommend using a fractional delay filter. Fractional delay filters model a time delay. The one I used for my examples was a windowed sinc function, a great tutorial on that can be found here or if you want code for a windowed sinc I created a tutorial on different types of interpolators, one of which is the windowed sinc. You can download the code at the end of the tutorial here. This will be more accurate for when you use a non stationary signal. The amount the signal should be delayed by is dependent on both the angle of arrival with respect to the given antenna element and the inter element spacing.

In order for this to be super interesting, add an unwanted signal coming from a different angle. Pick one to be your signal of interest and the other to be your interference source.

The other part is you need to add uncorrelated independent noise to each of the signals. This models real life since a receiver is going to have some amount of noise independent for each antenna element.

I know this was a lot but hopefully it helps. I thought about creating a workshop going over more detail in the math portions and showing how to code it all up in matlab. I just don't know if there's enough interest to put in all the work.

Christopher is the founder of GrittyEngineer.com. He graduated from BYU with both his bachelor's and master's in electrical engineering with an emphasis in digital communications. Since graduating he has been very interested in the field of adaptive beamforming and its many applications.