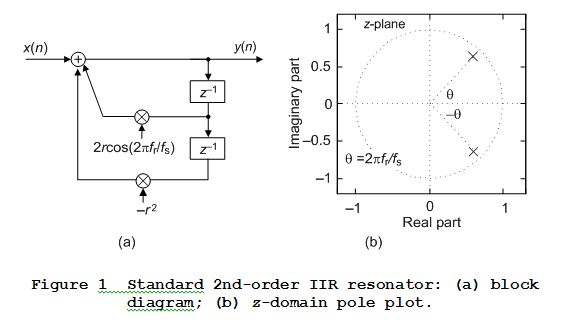 having two conjugate z-plane poles as shown in Figure 1(b), of radii r, located at angles of ±Θ radians. (The subscript “stand” in Eq. (1) means standard.) Angle Θ is

The standard IIR resonator has been around for a long time, and is used when someone needs a simple, computationally efficient, bandpass filter. For example, it's used in the implementation of the Goertzel algorithm. OK, you probably know all of this already. Let's move to the main point of this blog.

Quantized Coefficients
With floating point 2rcos(2πfr/fs) and r2 coefficients we can place our resonator's pole wherever we wish on the z-plane. However, in fixed-point processing systems we must quantize those coefficients so as to represent them by binary words having a finite number of binary bits. And in doing so we limit where on the z-plane we can place the resonator's poles. This means we no longer have precise control over the standard resonator's fr resonant frequency or its frequency response shape defined by r.

For example, Figure 2(a) shows the mandatory pole positions, in the z-plane's 1st quadrant, when the resonator's coefficients are quantized to 3 magnitude bits. (Due to trigonometric symmetry, the pole locations in the other three quadrants of the z-plane are mirror images of those shown in Figure 2(a).) 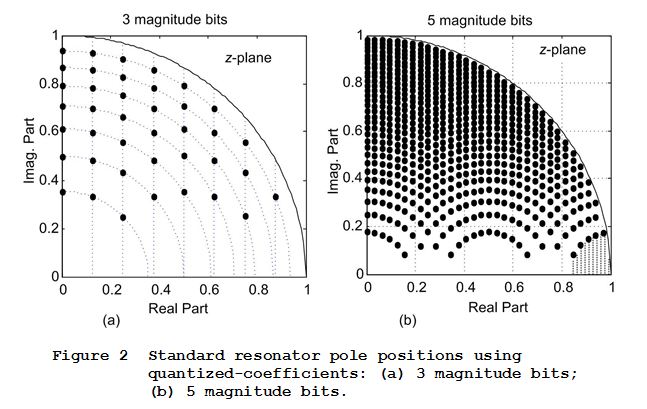 The reason the quantized poles must lie on the intersection of concentric circles and vertical lines is well described in the literature [1-3], so we won't worry about that here.

This situation improves a little when we quantize our standard resonator's coefficients to a greater number of bits. Figure 2(b) shows the mandatory 1st quadrant pole positions when the coefficients are quantized to 5 magnitude bits. But here again, as shown by the shaded area in Figure 2(b), we are still not able to build a standard resonator that will resonate at a very low (or very high) frequency.

Coupled-Form IIR Resonator
One solution to the above z-plane pole location restrictions is to use what's called the "coupled-form 2nd-order IIR resonator" shown in Figure 3. 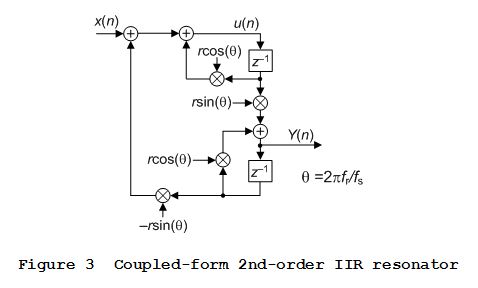 According to two DSP books on my bookshelf [1],[2], the coupled-form IIR resonator has z-plane pole positions, when we quantize the rcos(Θ) and rsin(Θ) coefficients using 5 magnitude bits, as shown in Figure 4. Notice the uniform pole spacing, where poles much closer to z = 1 are now possible. That behavior is what we need to build low-frequency or high-frequency 2nd-order IIR resonators. 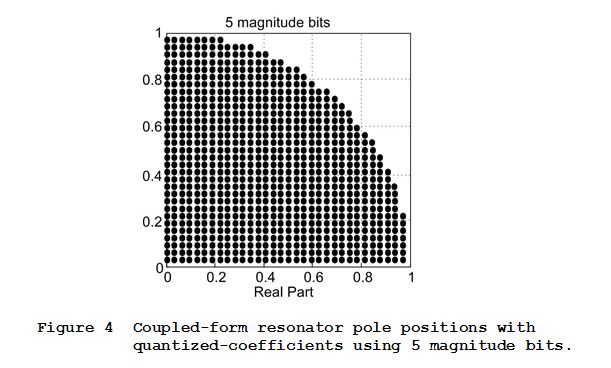 But here's the problem! How can Eq. (3)'s H(z) produce z-plane pole locations that are different from those from Eq. (1)'s Hstand(z) if both expressions have the same denominator polynomial? Something's wrong here.

We resolve this contradiction by realizing, from the derivation provided in the Appendix, that the appropriate transfer function of the coupled-form IIR resonator is:

where the subscript "coup" in Eq. (4) means coupled. Next we see that if Eq. (4)'s cos(Θ) and sin(Θ) terms are represented with infinite precision then those terms inside the brackets in the denominator will sum to unity. And in that case the denominator polynomials in Eq. (1), Eq. (3), and Eq. (4) will be identical.

However, when we quantize Figure 3's rcos(Θ) and rsin(Θ)coefficients to some finite number of bits, as we must in our binary world, the r2[cos2(Θ)+sin2(Θ)] factor in the denominator of Eq. (4) will not equal r2. In that case the coefficients of the z-2 terms in the denominators of Eq. (3) and Eq. (4) will be different. And that accounts for the difference in pole locations in Figure 4 compared to Figure 2(b). So the point is, we should always use Eq. (4) to predict the behavior of the coupled-form IIR resonator. This paragraph and Eq. (4) are the most important parts of this blog.

Because I became carried away while writing this blog, and it's longer than it need be, I might as well follow through and present a time-domain example of how the coupled-form IIR resonator is different from the standard IIR resonator.

An IIR Resonator Example
It's straightforward to show how the coupled-form resonator is an improvement over the standard Figure 1(a) resonator. Let's say we want to build a 2nd-order resonator having a resonant frequency of fr = 7 Hz, when our fs sample rate is 400 Hz, and we define our desired damping factor to be r = 0.99. Also we quantize the standard and coupled-form resonators' coefficients (2rcos(2πfr/fs), r2, rcos(2πfr/fs), and rsin(2πfr/fs)) to 5 magnitude bits. The following table shows our quantized-coefficients situation:

OK, the bottom line here is that the coupled-form IIR resonator has better performance than the standard IIR resonator when our desired resonant frequency is very low, or very high, relative to the input data's sample rate. The price we pay for that improved performance is an increase in the number of necessary multiplications per input sample. To quote Forrest Gump, "And that's all I have to say about that."

The z-transforms of those expressions are:

Now we start massaging the heck out of Eq. (A-4) to put Y(z)/X(z) on the left side of an equation and everything else on the right side of that equation. From Eq. (A-4) we write:

I just stumbled across this article. I've been using this form for years using a rather shaky combination of intuition and back of the envelope calculations. I hadn't realized that this form was in the literature.

Your article systematizes a lot of what I've been doing by the seat of my pants -- this is cool.
[ - ]
Comment by Tim Wescott●January 9, 2013

Great write-up Rick!  I notice that in your figure 3 if you take y[n] to be right where your u[n] is at the top after the first two adders, you will lose the numerator term such that H_stand(z) and H_coup(z) match (as it is now the difference is a gain and unit sample delay). This made me want to ask if there was any particular reason y[n] is taken instead where it is?

Dan, two items worth noting with regard to the Figure 3 network:

(II) The Figure 3 network works fine as a “resonator” (a simple bandpass filter) when the network’s poles lie inside the z-plane’s unit circle. But that coupled resonator can’t be used as an oscillator (by setting r = 1) because it’s poles cannot (in general) lie exactly on the unit circle.

Thanks Rick for the explanation and your additional points!

You are likely already well aware of this; as a related point of interest I see now as hinted in fred harris' presentation here that the Rader and Gold "Coupled Form" appears to be a single (complex) pole filter with a real input, and we can select the real output, imaginary output, or both as a quadrature signal generation: 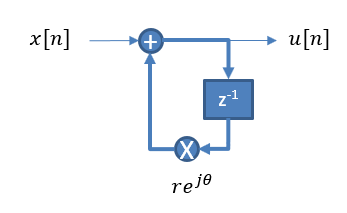 Which expands into an implementation to match your figure 3 with perhaps some further intuition into its structure: 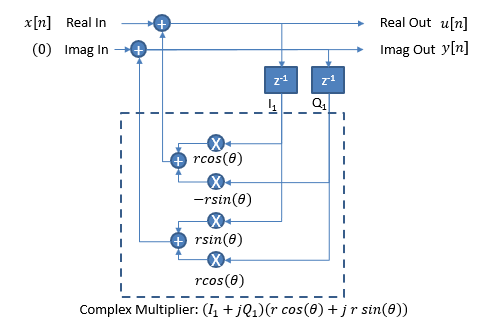 I've not seen fred harris' paper before. So, no, I was NOT aware of the equivalency of your above two resonator networks. Good job on your part, Dan, in recognizing and pointing that equivalency out to us. How interesting! (Your second network, with its real coefficients, is equivalent to my blog's Figure 3.)

I wonder if the equivalency of your above two resonator networks is the origin (the basis) of Charles Rader's and Ben Gold's "coupled resonator" that they unveiled to the DSP world in their seminal 1967 paper: