Correlation without pre-whitening is often misleading


Correlation, as one of the first tools DSP users add to their tool box, can automate locating a known signal within a second (usually larger) signal. The expected result of a correlation is a nice sharp peak at the location of the known signal and few, if any, extraneous peaks.

A little thought will show this to be incorrect: correlating a signal with itself is only guaranteed to give a sharp peak if the signal's samples are uncorrelated --- for example if the signal is composed of white noise.

Most interesting signals are not white noise.

Interesting Images Are Not White

When the signals of interest are images, the problem is exacerbated because the images are very different from white noise. Eight bit gray-scale images have pixel values from 0 to 255, so they almost always have a "DC offset".

Take the following simple image as an example. The image contains 5 blobs, some of which overlap. 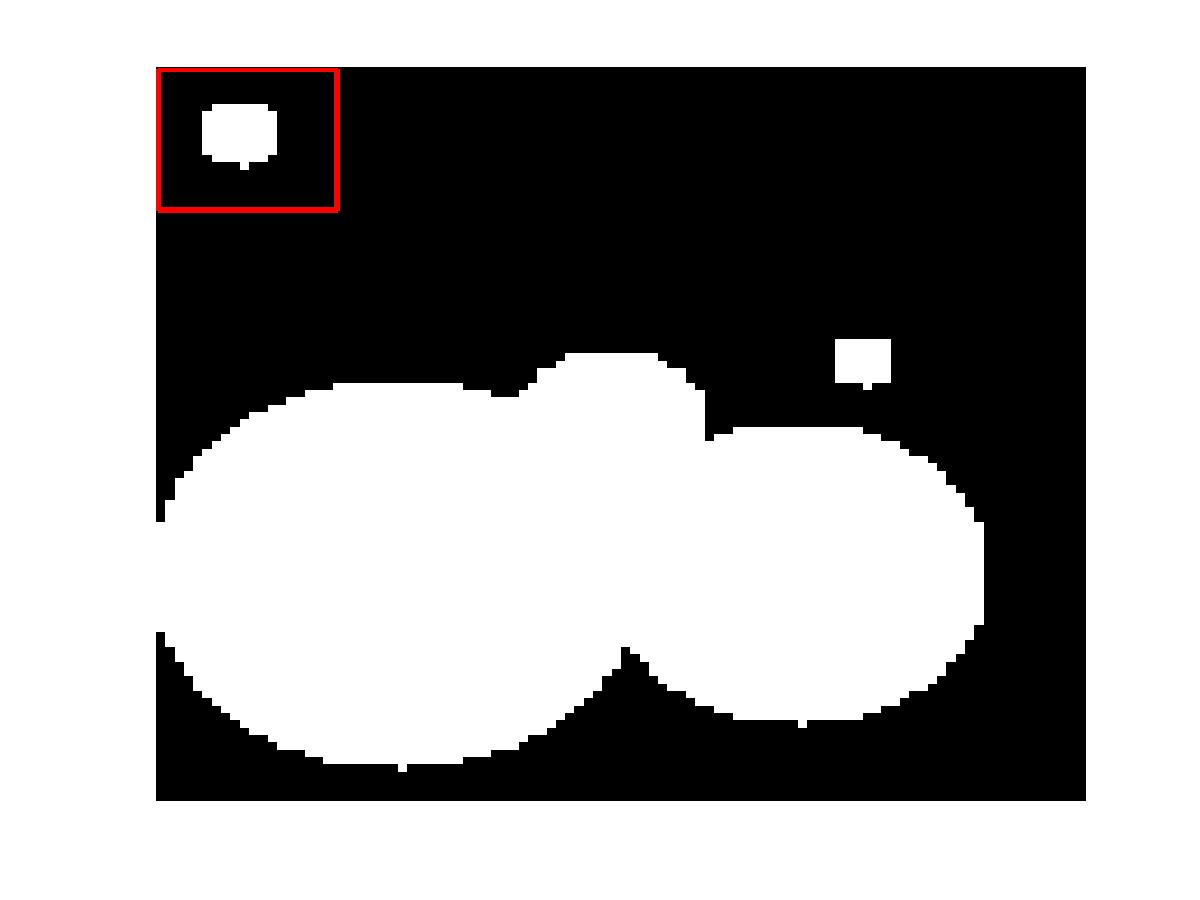 Suppose we wish to automate finding the blob indicated by the red line (the "known" signal). Simply using two-dimensional cross-correlation will yield the following image. 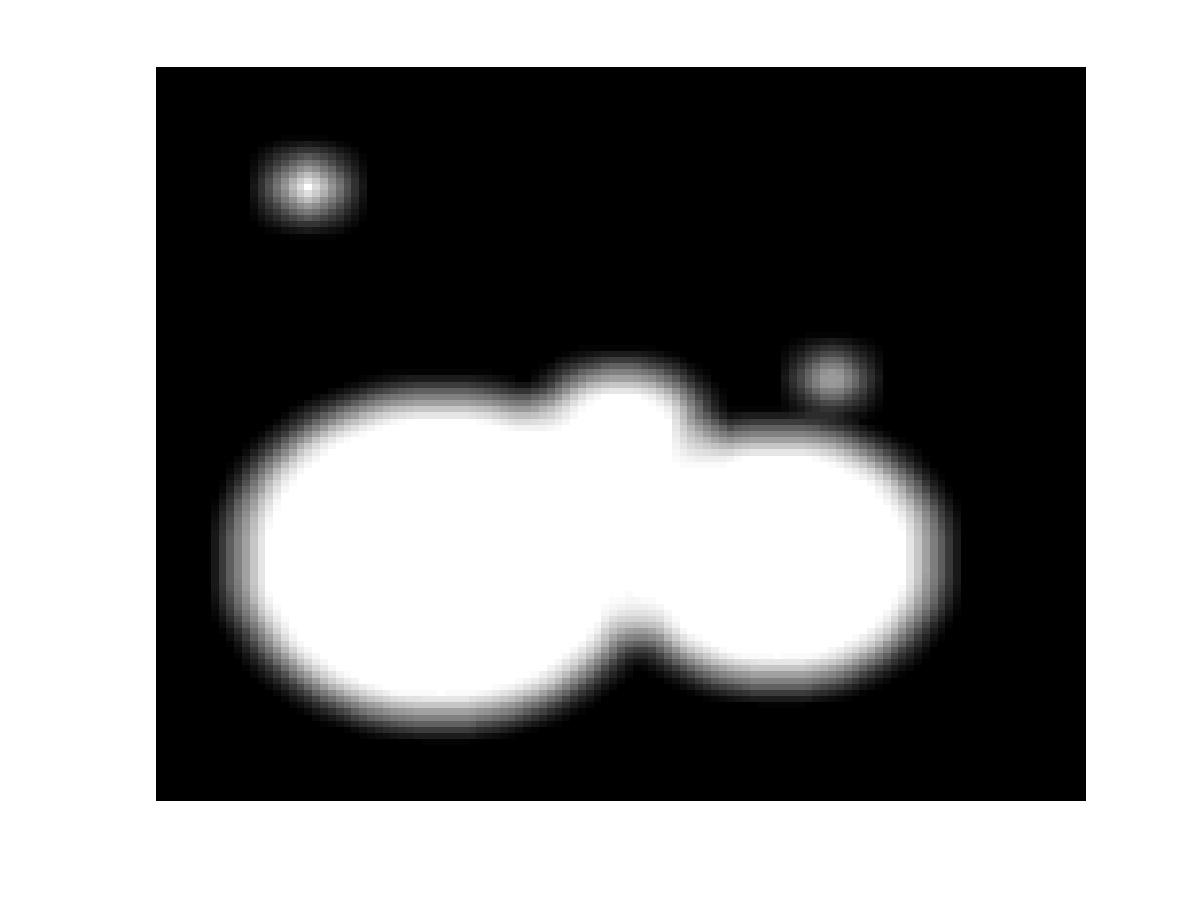 The localization of the peak in the image is not good due to the large, coalesced blob at the bottom of the image.

A simple way to both remove the DC component of the image, and to make the image "whiter" is to row-difference the image (i.e. subtract from each row the previous row). In Matlab this can be achieved with the "diff" function.

Note that both the "known" image and the image which is being searched require this pre-whitening.

After performing the diff operation on both the known image and the searched image, the following results. 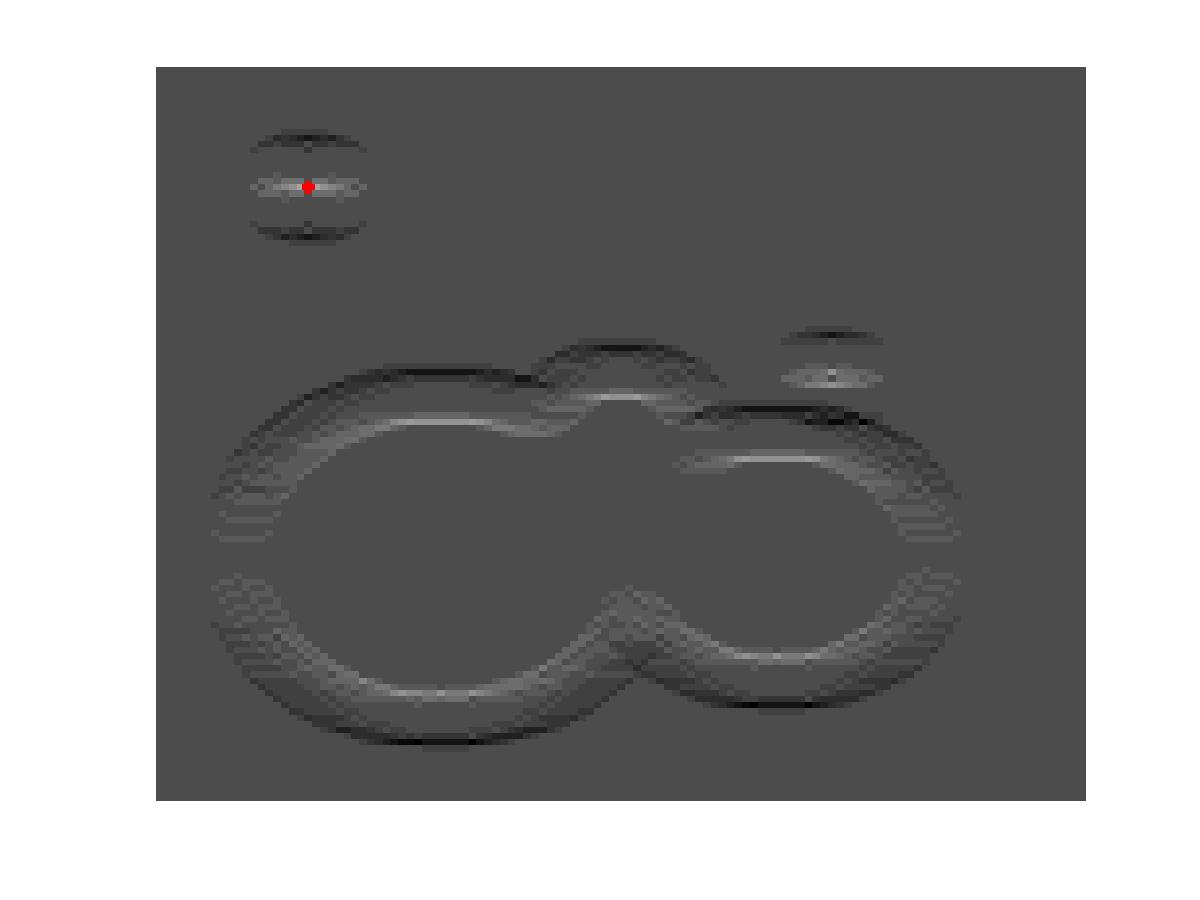 The red point indicates the peak of the new cross-correlation. A side view of this image shows how well the peak is discriminated from other peaks. 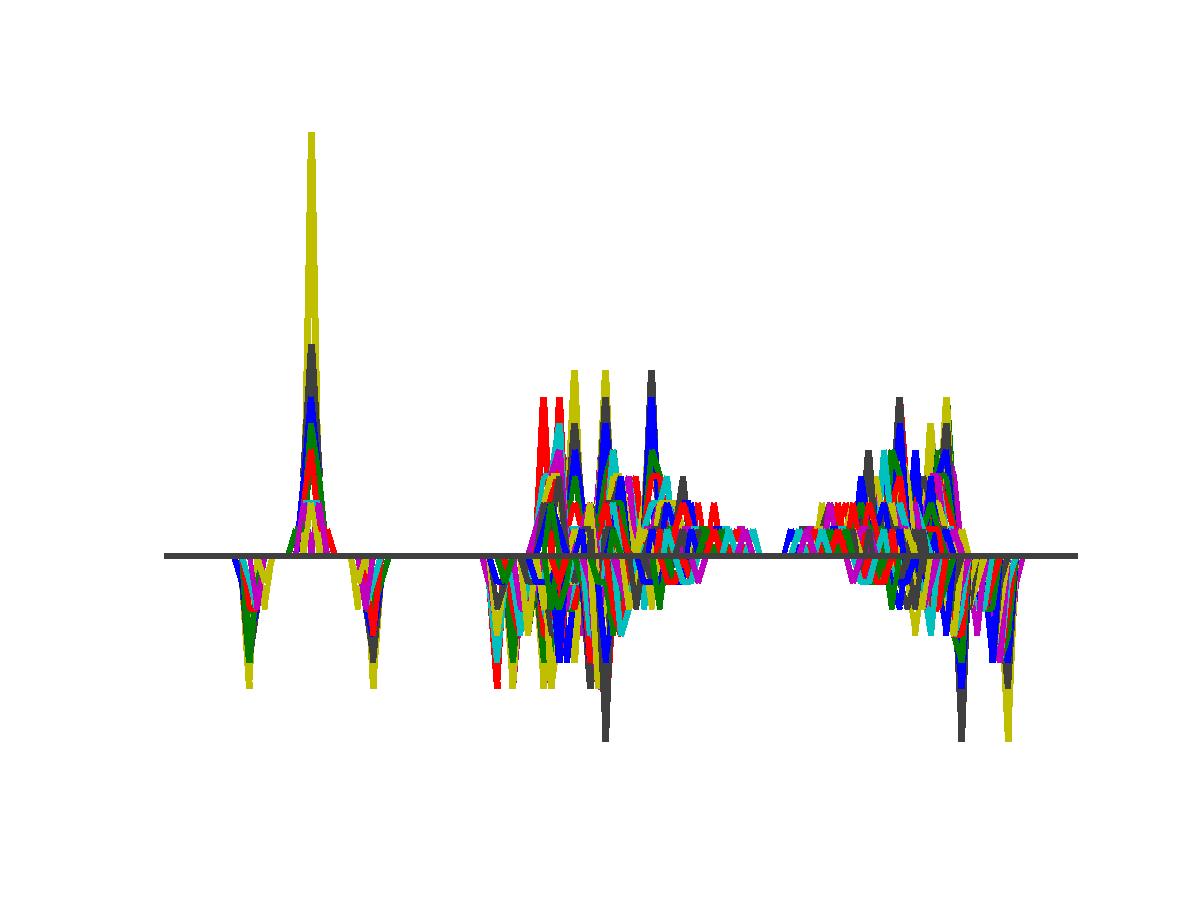 Hi Peter, This is a nice method. Any reason you want to use the difference operator in only the vertical direction? Does it make make the method better to use a full edge detection? Regards, Steve tSTev
[ - ]
Comment by kootsoop●February 18, 2008

Hi Steve, thanks for the comment! There's no reason to prefer the vertical direction over any other; that was chosen primarily for simplicity of the example. I'd have to think about whether full edge detection would improve things. The aim is spectral whiteness or uncorrelated samples. The "best" one could hope for in this regard is to filter by the inverse of the spectrum of the known signal --- "best" in the sense that if the searched image and known image are the same, this form of filtering will make the result completely spectrally white.
[ - ]
Comment by Shaguf●November 18, 2008

The time to act is now! Green is no longer in champagne activism territory; it has firmly positioned itself in the business mainstream as the next clean engine for economic growth. With rapid strides in technology, economic pressures, high energy prices, resource shortages, environmental threats, and compliance imperatives driving unprecedented growth in green energy, the pressure on scientists, technologists, government, and the industry to develop and adopt new methods for harnessing green energy has never been this overpowering. The first of its kind in India, Green Energy Summit 2009 will provide a unique platform for debate, dialogue and action between research, industry, academia, financial organisations, entrepreneurs and government bodies worldwide. The four tiers of the summit will see a congregation of the most intelligent minds and proactive organisations to create a sustained, result-oriented mindset, bringing into picture those questions that are most relevant for India at this juncture.
[ - ]
Comment by pkuapple●December 6, 2008

Hi Peter, thank you for the idea. Q1: Is this prewhitening equal (to some extend) to other whitening methods, e.g. subtracting the row (or column) means from the dataset? Q2: Does prewhitening make any sense when analyzing time-domain waveforms? e.g. sending a Gaussian shaped pulse (a range of frequencies) into an optical system, and sensing the output, which can be of arbitrary shape, but Gaussian. I would be thankful if you could point me to some direction, I can get some more basic info when to use whitening on a dataset. Thank you again for your time on the article!
[ - ]
Comment by gusthyzshub●June 9, 2010

Q3: By diff-ing a matrix the number of columns decreases by one (the first column vanishes). Is there any appropriate method to generate the missing column for later compatibility?
[ - ]
Comment by jut●January 17, 2012

Normalized correlation value in altboc programme in matlab PLEASE HELP ME this programe is a importance for me
[ - ]
Comment by drici●March 13, 2014

Peter Kootsookos has worked in a mixture of academic research and commercial interests in Australia, Ireland, and the United States. His DSP interests are in estimation, filtering and extraction of information from images and video.