Some Thoughts on Sampling

Some time ago, I came across an interesting problem. In the explanation of sampling process, a representation of impulse sampling shown in Figure 1 below is illustrated in almost every textbook on DSP and communications. The question is: how is it possible that during sampling, the frequency axis gets scaled by $1/T_s$ -- a very large number? For an ADC operating at 10 MHz for example, the amplitude of the desired spectrum and spectral replicas is $10^7$! I thought that there must be something wrong somewhere.

Figure 1: Sampling in time domain creates spectral replicas in frequency domain, each of which gets scaled by $1/T_s$

I asked a few DSP experts this question. They did not know the answer as well. Slowly I started to understand the reason why it is true, and in fact, makes perfect sense. The answer is quite straightforward but I did not realize it immediately. Since this is a blog post, I can take the liberty of explaining the route I took for this simple revelation.

My first impression was that whenever impulses are involved, everything that branches from there becomes fictitious as well. A continuous-time unit impulse is defined as shown in Figure 2.

Figure 2: Definition of a unit impulse

Clearly, the sampling scale factor is independent of how we define a unit impulse and its infinite height. The next step might be to look into a sequence of unit impulses: an impulse train.


An impulse train is a sequence of impulses with period $T_s$ defined as
$$        p(t) = \sum \limits _{n=-\infty} ^{+\infty} \delta (t-nT_s) $$
The standard method to derive its Fourier Transform is through expressing the above periodic signal as a Fourier series and then finding Fourier series coefficients as follows.
First, remember that a signal $x(t)$ with period $T_s$ can be expressed as

The resulting time and frequency domain sequences are drawn in Figure 3 above which is a standard figure in DSP literature. However, it really comes as a surprise that an impulse train has a Fourier Transform as another impulse train, although the Fourier Transform of a unit impulse is a constant. What happened to the concept that a signal narrow in time domain has a wide spectral representation? Going through this method, it is not immediately clear why.

So I thought of deriving it through some other technique. Note that I prefer to use the frequency variable $F$ instead of $\Omega$.

From here, there are many techniques to prove the final expression, and the mathematics becomes quite cumbersome. So I just take the route of visualizing it and see where it leads.

Where the Impulses Come From

First, the Fourier Transform of a time domain impulse train can be seen as the sum of frequency domain complex sinusoids with ``frequencies'' equal to $nT_s$, or periods equal to $\frac{1}{nT_s} = \frac{F_s}{n}$. Furthermore, the above signal is periodic with period of first harmonic $1/T_s=F_s$.

Therefore, for the sake of better visualization, we limit ourselves to the range $[0,F_s)$ when drawing the figures in frequency domain. Whatever happens here gets repeated elsewhere. Figure 4 illustrates 3 frequency domain complex sinusoids $e^{-j2\pi F   nT_s}$ for $n=1,2$ and $3$, with frequencies $T_s, 2T_s$ and $3T_s$, respectively. Note how within a period of $F_s$, the first completes one cycle, while the other two complete two and three cycles, respectively. Here, we deliberately refrained from drawing the result for $n=0$ which is a straight line at $1$ on $I$ axis. 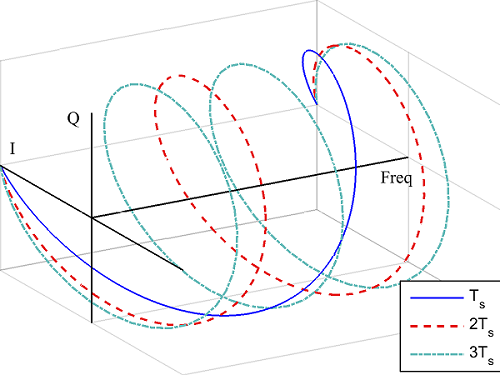 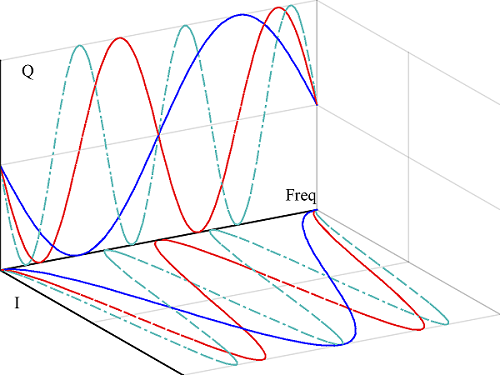 The result of summing the sinusoids shown in Figure 5 for a large $N$ is drawn in Figure 6. 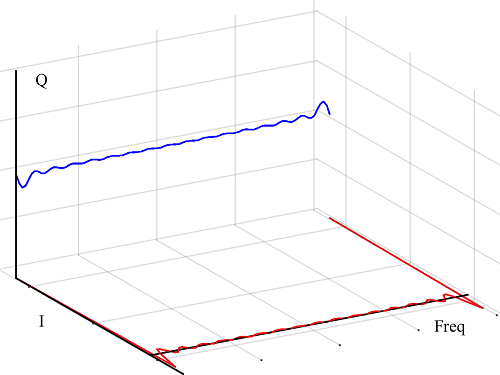 The rectangle at $k=0$ has a height of $N$ since it is a sum of $1$ for all $N$ values of $n$. It can now be concluded that
The scaling factor here can be found again by taking the area under the first rectangle. Thus,

It was then I realized my problem. All the graphs and curves I have drawn, and DSP textbooks draw for that matter, use the wrong scaling on the axes! Although the time and frequency domain impulse sequences look pretty much similar to each other, they are not. Imagine a very large number, say $L$. Now if I draw the time and frequency domain representations of an impulse train within the range $-L$ to $+L$, the signals would look like as illustrated in Figure 8 for a sample rate of $10$ MHz. As it is evident, all the confusion in the y-axis was due to incorrect scaling at the x-axis!

Here, it is easier to recognize that for an ADC operating at 10 MHz, there are (10 million)$^2$ impulses on the time axis, for just one such impulse on the frequency axis. Let us express the equivalence of energy in time and frequency domains (known as Parseval's relation) in a different way.
\begin{equation*}
\lim_{L \to \infty} \int \limits _{-L}^{+L} |x(t)|^2 dt = \lim_{L \to \infty} \int \limits _{-L}^{+L} |X(F)|^2 df
\end{equation*}Clearly, the scaling of the frequency axis by $F_s$ seems perfectly logical. A signal narrow in time domain is wide in frequency domain, finally! I must say that this is the same figure as Figure 3 but until I went this route, I did not figure (pun intended) this out.

This reminded me of drawing the structure of an atom along with the solar system to indicate some similarity, without mentioning their respective scales, as in Figure 9.

Figure 9: An atom and solar system


This also reinforced my concept of using the frequency variable $F$ instead of $\Omega$. While $\Omega$ has its advantages at places, the variable $F$ connects us with what is out there: the reality. The commonly used ISM band is $2.4$ GHz, not $4.8\pi$ G-radians/second.

A discrete impulse train $p[n]$ is a sequence of unit impulses repeating with a period $M$ within our observation window (and owing to DFT input periodicity, outside the observation window as well). Figure 10 illustrates it in time domain for $N=15$ and $M=3$.

This is the same result as in continuous frequency domain with impulse train having a period of $F_s$ as well as a scaling factor of $F_s$. However, it is much clearer to recognize in discrete domain due to the finite DFT size $N$. That is why I talked about limiting the continuous frequency range within $\pm L$ for a large $L$ and wrote Parseval's relation as above.

With the above findings, we want to see what happens when a discrete-time signal is sampled with a discrete-time impulse train. In DSP terminology, this process is known as downsampling. Although it is common to discuss downsampling as a separate topic from sampling a continuous-time signal, both processes are intimately related and offer valuable insights into one another.

A signal $x[n]$ can be downsampled by a factor of $D$ by retaining every $D$th sample and discarding the remaining samples. Such a process can be imagined as multiplying $x[n]$ with an impulse train $p[n]$ of period $D$ and then throwing off the intermediate zero samples (in practice, no such multiplication occurs as zero valued samples are to be discarded). As a result, there is a convolution between $X[k]$ and $P[k]$ and $D$ spectral copies of $X[k]$ arise: one at frequency bin $k=0$ and others at $\pm integer \cdot N/D$, all having a spectral amplitude of $N/D$. As $D$ increases, the spectral replicas come closer and their amplitudes decrease proportionally. This is illustrated in Figure 12 for downsampling a signal by $D=3$. 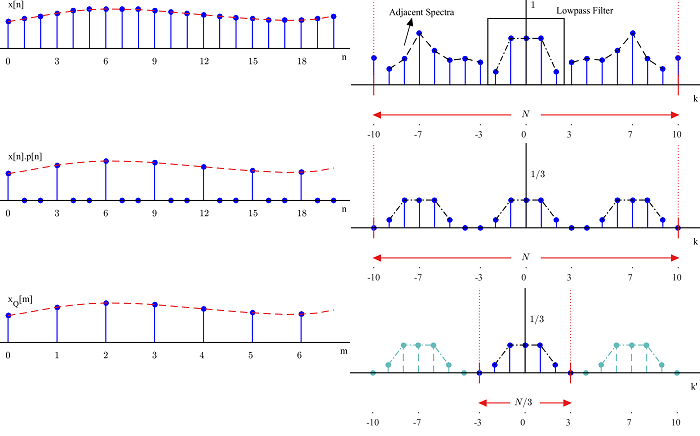 Figure 12: Downsampling a signal $x[n]$ by $D=3$ in time and frequency domains

Carrying on, now we can look into an alternative view on sampling. First, consider the scaling property of the Fourier Transform.
\begin{equation*}
x(a\cdot t) \quad \xrightarrow{{\mathcal{F}}} \quad \frac{1}{|a|} X\left(\frac{F}{a} \right)
\end{equation*}
Second, instead of impulse sampling, we can just see it as a scaling of the time axis. Taking the constant $a$ as $T_s$,
\begin{equation*}
x(T_s \cdot t) = x(tT_s) \quad \xrightarrow{{\mathcal{F}}} \quad \frac{1}{T_s} X\left(F = \frac{f}{T_s} \right)
\end{equation*}
Here, $x(tT_S)$ is the counterpart of $x(nT_s)$ from impulse sampling with the difference being a real number $t$ instead of an integer $n$. Also, instead of nano and micro seconds, $T_s$ has no units and we just deal it in the limiting case where the interval $[0,T_s)$ is divided into infinitesimally small segments and $T_s$ is just a positive number. In this way, this case becomes similar to downsampling where $D$ is always greater than $1$.

The spectrum x-axis also gets scaled by $T_s$ leading to the fundamental relationship between continuous-time frequency $F$ and discrete-time frequency $f$.
\begin{equation*}
f = F\cdot T_s \qquad \rightarrow \qquad \omega = \Omega \cdot T_s
\end{equation*}Within this framework, it is only after discarding the intermediate ``samples'' that the spectral replicas emerge. This is a result of defining the frequency axis in relation to periodic signals. There might be an alternative definition of frequency that would make processing the samples easier.
You might also like... (promoted content)

I've gone through similar thinking on this.  It turns out, that no matter what method you choose to scale things, you'll find that (A) there are some constraints that you have to put on the axis scaling to keep the numbers consistent as you go from continuous-time to sampled-time and back, and (B) no matter what you do, it'll be klunky.  Ultimately, I gave up and just stuck to what's in the published literature.

Something that's worthy of note is your question "why does the frequency axis get scaled by a very large number", and you cite 10MHz ( \( 10^7 \) ) as an example.  In this, you are making two errors.

Second, you are assuming that all DSP is carried out for the purposes of radio waves.  I work on closed-loop control systems, and while I have not yet had the pleasure of working on a system that samples at less than 1Hz, there are such systems out there.  These systems -- even using your chosen units, come with the question "why does the frequency axis get scaled by a (possibly very) small number?"

You are right Tim. Here, I just wanted to compare seconds and cycles/second. Also, I thought about sampling rates of less than 1 Hz and discarded it as a hypothetical situation. Thank you for increasing my knowledge.

My main area of interest is signal processing for wireless communication systems. I write about it at https://wirelesspi.com.