When a sinewave is applied to a data converter (ADC or DAC), device nonlinearities produce harmonics.  If a harmonic frequency is greater than the Nyquist frequency, the harmonic appears as an alias.  In this case, it is not at once obvious if a given spur is a harmonic, and if so, its order.  In this article, we’ll present Matlab code to simulate the data converter nonlinearities and find the harmonic alias frequencies.  Note that Analog Devices has an online tool for the same purpose which does not use simulation [1].

In the lab, many frequency-domain impairments can be measured using the test set-ups shown in Figure 1.  For an ADC, we feed a sine to the ADC as shown in Figure 1a, capture the ADC output in memory, and use the captured signal to compute the spectrum using the Discrete Fourier Transform (DFT).  For a DAC, we can generate a sine using a numerically-controlled oscillator (NCO) and apply it to the DAC, as shown in Figure 1b.  The output is fed to a spectrum analyzer.

Here, our goal is to simulate particular impairments -- harmonics -- and find their frequencies.  We can do this by using the model in Figure 2.  We generate a sine using an NCO, apply a nonlinearity, then perform the DFT.  The resulting spectrum will show the harmonics, including aliased ones, over 0 to fs/2.  The model works for either ADC’s or DAC’s. 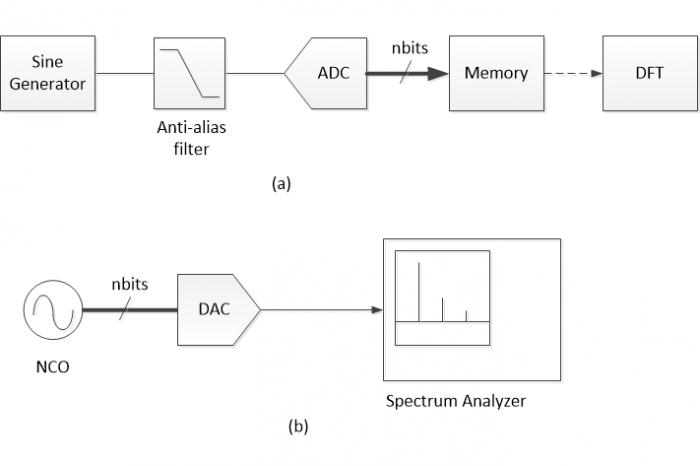 Given NCO output x, the equation for the non-linearity is as follows:

Where c is a constant with absolute value typically much less than one, and p is an integer greater than one.  Since our goal is to find just the frequencies, and not the amplitudes, of the harmonics, the exact value of c is arbitrary.  Normally, c is negative, which results in gain compression.

The appendix of the PDF version of this article lists the Matlab function adc_dac_harm.m that implements Equation 1.  It plots the spectrum of a data converter’s output, given sine frequency f0, sample frequency fs, number of bits, exponent p, and nonlinear coefficient c.  The spectrum is plotted over a frequency range of 0 to fs/2.  Note that, in the case of a DAC, the function does not model the sinx/x frequency response.

Here is an example using p = 5 without aliasing: i.e., the harmonic falls below fs/2.  The nonlinear coefficient is not specified in the function call; it defaults to c = -.05.  Matlab code is as follows:

The spectrum is shown in Figure 3, where we note that there is a 3rd harmonic as well as the 5th harmonic present in the spectrum.  This follows from the trigonometric identity:

The amplitudes of the harmonics with respect to the fundamental are arbitrary, so the vertical scale is left blank.  Note that the 3rd harmonic is larger than the 5th harmonic.   In general, Equation 1 results in harmonic amplitude decreasing with harmonic order, so when the harmonics are aliased, you can use this fact to identify the order of each harmonic component. 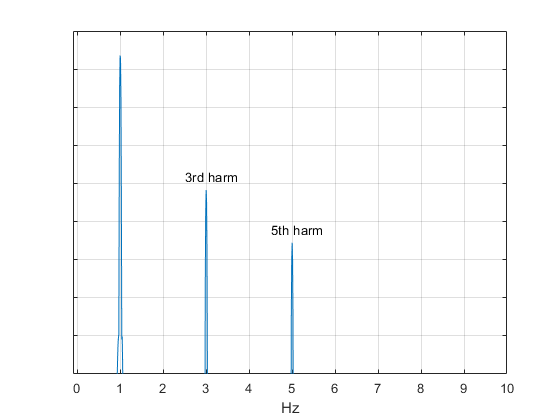 Now let’s look at some cases with aliasing.  Let f0 = 7 Hz, fs = 20 Hz, and let p = 5.  Once again using adc_dac_harm.m, we get the spectrum of Figure 4 (top), which shows the (smaller) 5th harmonic aliasing to 5 Hz and the (larger) 3rd harmonic aliasing to 1 Hz.  To check the third harmonic, we note that the aliased harmonic frequency is given by the following equation with p = 3 and k = 1:

The bottom plot of Figure 4 uses the same sine and sampling frequencies, with p = 4.  The exponent of 4 generates both a 4th and 2nd harmonic, as shown.  A dc term is also visible.  The two plots of Figure 4 provide all of the harmonics from 2 through 5.  You can compare these results to Figure 8 in [2].

Finally, if you have ever tested a DAC using the set-up of Figure 1b, you may have seen how the harmonics move across the spectrum (in both directions) as you change the NCO frequency.  The mfile movie.m listed in the appendix gives an animated demonstration of this effect for a DAC or ADC (again, DAC sinx/x response is not modeled).  The mfile uses fs= 100 Hz, nbits = 9, p = 5, and c = -.01.  Run time is roughly 25 seconds. 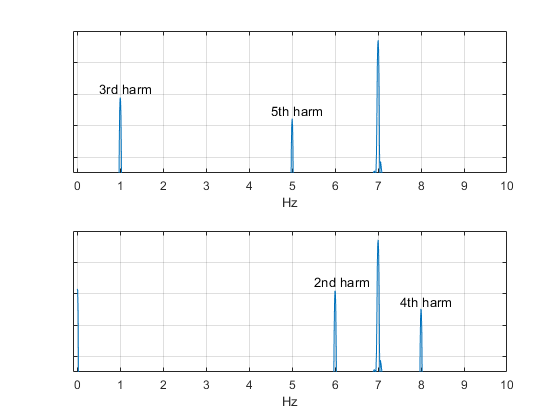 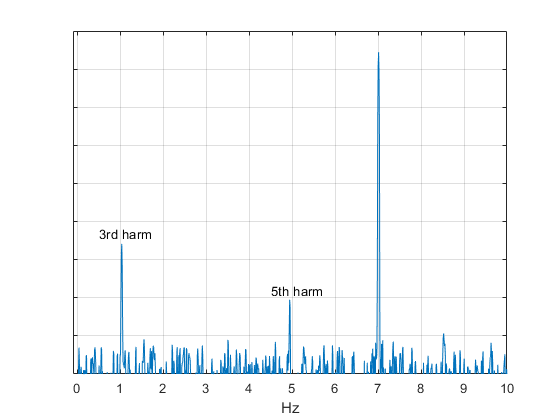 For the appendix, see the PDF version of this post.

3.  Robertson, Neil, “Use Matlab Function pwelch to Find Power Spectral Density – or Do It Yourself”, DSPrelated, Jan, 2019, https://www.dsprelated.com/showarticle/1221.php