This article shows how to implement a Butterworth IIR lowpass filter as a cascade of second-order IIR filters, or biquads.  We’ll derive how to calculate the coefficients of the biquads and do some examples using a Matlab function biquad_synth provided in the Appendix.  Although we’ll be designing Butterworth filters, the approach applies to any all-pole lowpass filter (Chebyshev, Bessel, etc).  As we’ll see, the cascaded-biquad design is less sensitive to coefficient quantization than a single high-order IIR, particularly for lower cut-off frequencies [1, 2]

In an earlier post on IIR Butterworth lowpass filters [3], I presented the pole-zero form of the lowpass response H(z) as follows:

The N zeros at z = 1 (ω= π or f = fs/2) occur when we transform the lowpass analog zeros from the s-domain to z-domain using the bilinear transform.  Our goal is to convert H(z) into a cascade of second-order sections.  If we stipulate that N is even, then we can write H(z) as:

Each term in equation 2 is biquadratic – it has quadratic numerator and denominator.  It is not necessary to use a separate gain K for each term; we could also use just a single gain for the whole cascade.

where $p^*_k$ is the complex conjugate of $p_k$.  Expanding the numerator and denominator, we get:

where a = [1 a1 a2] are the denominator coefficients of the biquad section.  Summarizing the coefficient values, we have:

A biquad lowpass block diagram using the Direct form II structure [4,5] is shown in Figure 1.  We will cascade N/2 biquads to implement an N th order filter (N even).  Note that the feed-forward coefficients b have the same value for all N/2 biquads in a filter.  This is evident from Equation 3.

In this example, we’ll use biquad_synth to design a 6th order Butterworth lowpass filter with -3 dB frequency of 15 Hz and fs= 100 Hz.  Note  biquad_synth uses the bilinear transform with prewarping [3] to transform H(s) to H(z).  The filter will consist of three biquads, as shown in Figure 2.   biquad_synth computes the denominator (feedback) coefficients a of each biquad.  The gains K are computed separately.  Note biquad_synth contains code developed in an earlier post on IIR Butterworth filter synthesis [3].  Here is the function call and the function output:

The gains for each biquad are, from equation 4:

Now we can compute the frequency response of each biquad.  The overall response is their product.

The magnitude response of each biquad and the overall response are plotted in Figure 3.  The sequence of the biquads doesn’t matter in theory; however, placing the biquad with the peaking response (h3) last minimizes the chance of clipping.

As I stated at the beginning, the cascaded-biquad design is less sensitive to coefficient quantization than a single high-order IIR, particularly for lower cut-off frequencies.  To illustrate this, we’ll first look at how quantizing coefficients effects z-plane pole locations of a 6th order IIR filter.  The following code finds the unquantized poles of the 6th order Butterworth filter with -3 dB frequency fc = 5 Hz.  (Note butter [6] is a function in the Matlab signal processing toolbox that synthesizes IIR Butterworth filters).

The poles are plotted as the red x’s on the left side of Figure 4.  We have also plotted the poles for fc= 12 Hz (blue-ish x’s).  Each set contains 6 poles.  If we plot the poles of filters having fc from 1 Hz to 25 Hz in 1 Hz increments, we get the plot on the right, where only the right side of the unit circle is shown.  The lower values of fc are on the right, near z = 1.

Now let’s quantize the denominator coefficients and see how this effects the pole locations of Figure 4.  Let nbits = the number of bits per unit of coefficient amplitude:

Here is the code to find the quantized poles for a single value of fc:

Letting fc vary in 0.5 Hz increments from 0.5 to 25 Hz, we get the poles shown on the left of Figure 5.  As you can see, as fc decreases, quantization causes the poles to depart from the desired locations.  The right side of Figure 5 shows the effect of 10-bit quantization.

We can do the same calculation for the biquads that make up the 6th order cascaded implementation.  For example, here is the code to find the quantized poles of the second biquad for a single value of fc (recall that the matrix a has three rows containing the coefficients of 3 biquads).

This time, letting fc vary in 0.25 Hz increments from 0.25 to 25 Hz, we get the poles shown in Figure 6, which includes only quadrant 1 of the unit circle.  The biquad performs much better than the 6 th order filter, only departing dramatically from the unquantized curve for fc = 0.25 Hz.  So we expect better performance from cascading three biquads vs. using a single 6 th-order filter.

Figure 6.  Effect of Quantization on poles of one biquad, nbits = 10.

For the biquad filter, we use biquad_synth to find the coefficients for fc = 6.7 Hz:

For the conventional filter, we again use the Matlab function butter:

In each case, we quantize coefficients to 10 bits per unit of coefficient amplitude:

For the biquad implementation, the quantized poles are:

Figure 7 shows the z-plane poles for the floating-point and quantized coefficients.  Quantization has little effect on the biquad version, but has a large effect on the conventional filter.

So how low can we go with this N= 6 Butterworth cascaded-biquad filter?  As we reduce fc, the quantization of 1024 steps per unit of coefficient amplitude eventually takes a toll.  Figure 9 shows the z-plane poles and magnitude response for fc= 1.6 Hz.  As you can see, the magnitude response is sagging.  If we stay above fc of 2.5 Hz = fs/40, the response error is less than 0.1 dB.

Besides adding coefficient bits, there are other ways to improve performance of narrow-band IIR filters.  See for example the post in reference [7].

This program is provided as-is without any guarantees or warranty.  The author is not responsible for any damage or losses of any kind caused by the use or misuse of the program.

Wow. This a great article, Sir. Thank you.

Thanks Neil! This was very helpful!

Here's a Python port of your biquad_synth function:

Thanks for the code.

Could a similar technique be used for a high-pass Butterworth?

Yes, I think the technique is general.

Based on your Design IIR Highpass Filters article, I tried to get a high-pass version by changing this

But I'm see the same results. Am I heading in the right direction?

To summarize:  what you did was change the poles, but to get a hpf, the zeros (numerator coeffs) and gain scaling need to change as well.

The LP to HP transformation of the poles is:

Then the change to the numerator coeffs and scaling is:

thanks a lot for all the great articles - they are really helpful and I appreciate them!

I was just wondering about a comment in your code: "put high Q last".

Is there some general advice on how to order biquad stages (regarding any filter, i.e. lp, hp or bp) - I guessed the gain would be the most interesting figure to look at - but maybe I am wrong and it is indeed Q.

Any explanations on this topic would be greatly appreciated.

Here is a quote from the post's text on that topic:

"The magnitude response of each biquad and the overall response are plotted in Figure 3.  The sequence of the biquads doesn’t matter in theory; however, placing the biquad with the peaking response (h3) last minimizes the chance of clipping."

If you look at the poles of the overall filter, the h3 section's poles are closest to the unit circle ("highest Q").  So it makes sense to order the sections of a LPF according to their distance from the unit circle:  farthest first to closest last.

For a few words on ordering/scaling of the sections of a cascaded-biquad BPF, see my post https://www.dsprelated.com/showarticle/1257.php

thanks for your reply. Me (and me colleague) still are interested to understand the whole story.

I was stumbling about your quotes ^^:

... and I guess your advice is a pragmatic approach towards using the center of the z-plane / the absolute value of the poles as a measure for sorting the poles when using cascaded biquads.

I found a nice plot on Stackexchange that illustrates equipotential levels of Q in the z-plane: https://dsp.stackexchange.com/questions/19148/whats-the-q-factor-of-a-digital-filters-pole

They tend to be similar, but not exactly the same thing as the distance to the center / the unit sphere bound. I guess the difference is most crucial when we are dealing with very narrow banded filters at lower frequencies (relative to the sampling rate) - which is, unfortunately, exactly what we are heading for at the moment.

So, the "by-the-bool" solution would be to use Q indeed and not |z|, or is there still something I am missing?

Maybe there is no need to bring the concept of Q into the discussion.  Maybe it's simpler to just say that the biquad sections are ordered starting with the pole-pairs closest to the unit circle.

For a Butterworth LPF, the poles fall on a nice circle in the z-plane, so there should not normally be any ambiguity about ordering.

Of course, it is not required to use any particular ordering if you allow extra headroom in your adders to account for the biquad gain exceeding 1 over a portion of the frequency range.

Finally, I don't claim to be an expert on IIR filter design -- I'm just trying to illustrate some basics!

Thanks for the encouragement!

I have a question about design Bessel filter.

To find the pole of Bessel filter, the frequency normalization process required the division of Thomson’s values by a factor(Bessel Normalizing Factors), as follows: 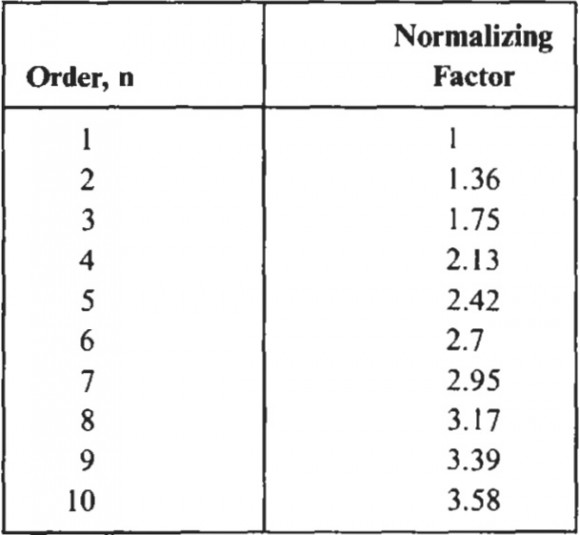 But I using these factor to calculate the pole of the Bessel filter, the pole are not same as MATLAB besselap.m, as follows: 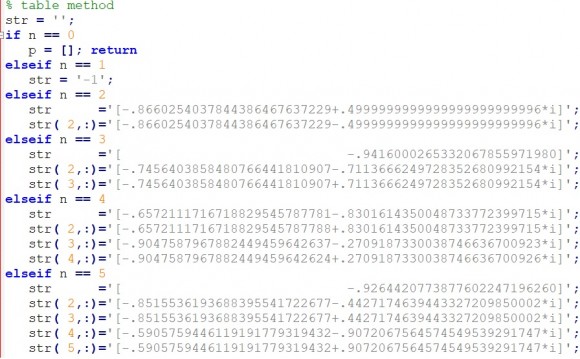 This problem has troubled me for a long time.

Sorry, I don't know the answer to your question.

this question belongs in the forum I think - feel free to ask it there.

Thank you sir. Realy good article. I want to as a question with your permission.

MATLAB always setting b=[1,2,1]. But when I search different web sites, this matrix can changable. What's the reason of this situation.

Thank you and have a nice day.

This choice of zeroes means that the frequency response has a null at fs/2, which is a sensible choice for lowpass filters.