We don’t often think about signal transmission lines, but we use them every day.  Familiar examples are coaxial cable, Ethernet cable, and Universal Serial Bus (USB).  Like it or not, high-speed clock and signal traces on printed-circuit boards are also transmission lines.

While modeling transmission lines is in general a complex undertaking, it is surprisingly simple to model a lossless, uniform line with resistive terminations by using a discrete-time approach.  A discrete-time model easily computes both time and frequency responses, and serves as a good learning tool.  In this post, I provide discrete-time Matlab functions tline and wave_movie, and use them to model lossless uniform transmission lines (note these simple models can approximate lossy transmission lines only if they are short).  Before delving into transmission line math, let’s look at a practical case:  a pulse on a printed-circuit board (PCB) trace.

Example 1.  Pulse on a microstrip line

A microstrip transmission line consists of a trace on the top layer of a PCB with a ground plane on a lower layer.  Figure 1 shows a cross section of a microstrip line of length L = 10 cm, fed by a digital driver and terminated in a buffer.  We will neglect the buffer’s input capacitance, and assume a resistive load as shown.  We also assume no discontinuities along the line, such as sharp bends or vias.  Let the line have a propagation velocity of 0.55 times the speed of light and a characteristic impedance Z0 of 75 ohms.  Z0 can be calculated from the line’s dimensions and substrate properties [1].  There are also microstrip impedance calculators available on the web [2].

Now suppose the total source resistance RS is 20 ohms and the load resistance RL is 50 k ohms, and let the input signal VS be a pulse with sample time Ts = 38 ps, as defined in the following Matlab code.  The output VL of the line is computed by the function tline (Appendix A of the PDF version).  Figure 2 shows the pulse input VS (top) and the output VL (middle).

The ringing of the output is due to reflected waves traveling back and forth on the line.  After the initial rising edge, the output changes each time the reflected pulse edge makes a trip from load to source and back to load.  (Note a real-world signal would not have such sharp edges, for two reasons: first, the input signal would have a finite bandwidth; and second, the microstrip line would have frequency-dependent loss).  To reduce the reflections, we can adjust the source resistance to approximately Z0.  For example, if RS = 80 ohms, we get the output shown in the bottom plot of Figure 2.  The response is improved because the matching source resistance absorbs the wave reflected from the load.  Such an arrangement is called a singly-terminated microstrip line.

We can also view an animation of the waves travelling on the microstrip line using wave_movie (Appendix B of the PDF version).  Here is the Matlab code for a movie of a transmission line with step input: 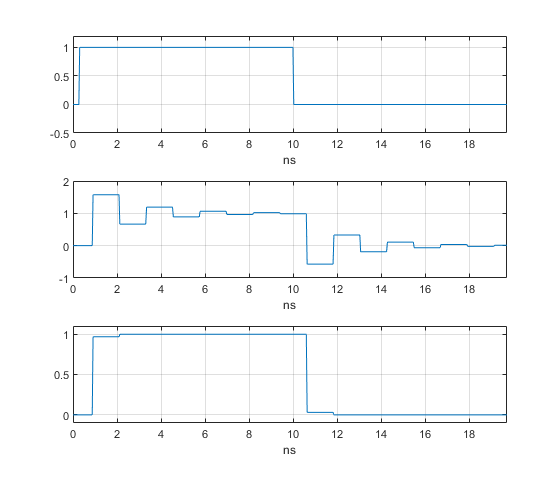 A Very Brief Summary of the Wave Equation for Transmission Lines

In conventional circuit analysis, we assume signals on a wire or printed-circuit trace are functions solely of time.  But at high frequencies, signals are a function of time and position, and a length of wire or a trace becomes a transmission line.  The lossless transmission line model of Figure 3 represents a small length of line dz by a series inductor and shunt capacitor.  L and C have dimensions of inductance per length and capacitance per length; their values depend on the geometry of the line [3].  Voltage on the line obeys the one-dimensional wave equation [4]:

The solution of Equation 1 is any function of the variable t – z/v:

This equation represents a wave on the transmission line, traveling at velocity v.  For example, suppose a pulse wave travels on a lossless transmission line with v = .8c, where c is the speed of light (3E8 m/s).  Then, if we measure voltage versus z, the result might look something like Figure 4, where we show the relative location of V(z) at three different times: as shown, the pulse wave travels in the positive z direction vs. time.  The full solution of Equation 1 includes a wave traveling in the negative direction:

We can write this as: 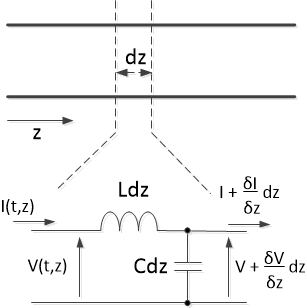 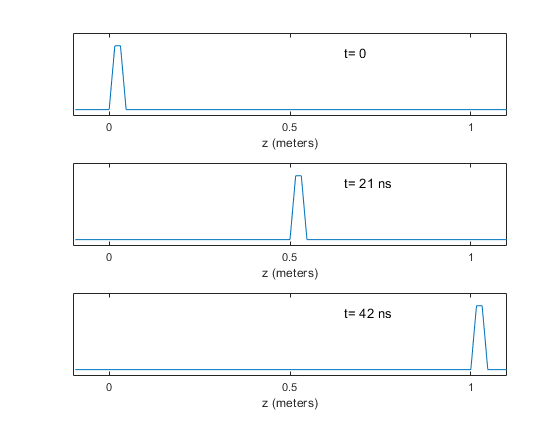 Figure 4.  Pulse wave amplitude vs. distance and time on a lossless transmission line.

The ratio of voltage to current for either the positive-travelling or negative-travelling wave is a constant of the transmission line called the characteristic impedance Z0.  For a lossless line it is given by:

Although it is called an impedance, Z0 is real-valued.  If the load resistance at the end of the line is not equal to Z0, a reflected wave V- is produced, as shown in Figure 5.  The ratio V-/V+ is called the reflection coefficient, and for pure-resistive load it is given by:

Figure 5.  Reflection on a transmission line with resistive load.

Let a sinusoidal voltage be represented by:

If we apply this signal to a lossless transmission line, we obtain a positively travelling wave (see Equation 3):

Allowing for a negatively travelling wave as well, the total voltage is:

We can shorten this to:

where β is called the phase constant:

Phase constant β represents the phase at z relative to the phase at z = 0.  The phase at two values of z is equal when β*Δz = 2πk.  For k = 1, the value of Δz is called the wavelength λ. Thus:

Using Equation 12, we can also write:

Now let’s create the discrete-time model.  The model will consider only resistive source and load.  Figure 6a shows a transmission line with characteristic impedance Z0 and length L, connected between source RS and load RL.  The reflection coefficients due to the source and load terminations are shown.  A wave travelling in either direction on the line undergoes a delay over the line’s length of:

where v is propagation velocity.  We want to replace this delay with a discrete-time delay of M samples.  Given sample time Ts, we have:

We need the delay to operate on both the positive and negative travelling waves, which is achieved using the block diagram of Figure 6b.  (Here z-M represents a delay of M samples, not distance on the line!)  The real gains ρS and ρL account for the reflections at source and load.  The gain K takes into account the gain of the cascade of source, transmission line, and load.  Note that this block diagram models the signals at the ends of the transmission line, but not along the length of the line.  We’ll consider the latter case later in this article.

The z-domain transfer function of the block diagram in Figure 6b is:

The expression for K was developed using a circuit model: see Appendix C of the PDF version.  We can rewrite Equation 18 using IIR filter coefficients:

The time response of the transmission line is then given by the difference equation:

Where x = VS and y = VL.  This simple result applies for any signal waveform, provided that source and load are resistive.  Equation 20 is implemented by the Matlab function tline (See Appendix A of the PDF version).  We used tline in Example 1. 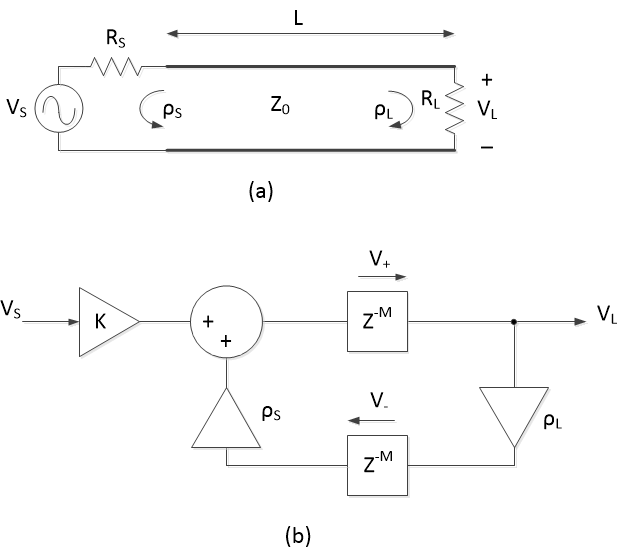 In this example, we’ll compute the frequency response of the lossless transmission line shown in Figure 6a for several values of RS and RL  (we won't use tline.m here).  Let the transmission line have the following properties:

Case I:  RS = RL = Z0 = 75 ohms.  The response is plotted in the top of Figure 7.For this case, there are no reflections, and the response is flat with gain of 0 dB (The response of a lossy line would roll-off vs. frequency, in this and the following cases). 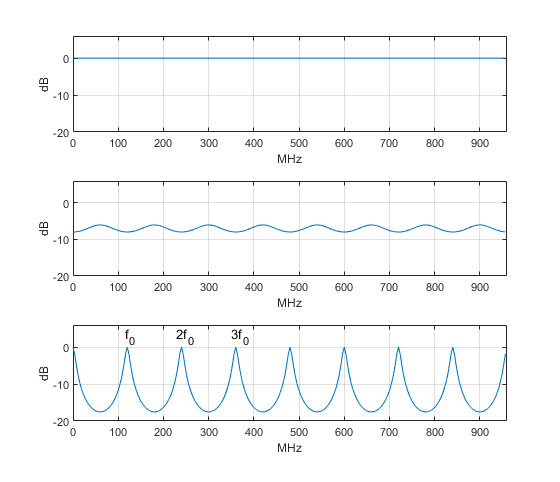 Example 3.  Standing Waves in a Resonator

In Example 2, we found the frequency response of a 75-ohm transmission line with RS = RL = 5 ohms (See circuit diagram in Figure 8).  The response was resonant at 120 MHz and harmonics.  The longest wavelength resonance occurs when wavelength is twice the length of the line:

Thus, from Equation 14, the lowest resonant frequency f0 is:

Our transmission line model of Figure 6b represents the line with M time samples.  This corresponds to a sample spacing in distance of L/M.  By summing the positive and negative traveling waves, we can plot the line voltage vs. distance and time.  The function wave_movie (Appendix B of the PDF version) plots an animation of the voltage on the line, using M= 16.  Here is Matlab code to call wave_movie for a sine at 120 MHz.  Note that the code must calculate the sine’s sample time Ts based on L, v, and M.

A cumulative plot of the resulting animation is shown in Figure 9 (top).  Each curve approximates 1/2 cycle of a sinewave at a given instant in time.  Thus, wavelength is 2L, which is consistent with Equation 21.  Although V+ and V- move at velocity v, their sum along the line does not travel, producing a standing wave.  Looking at harmonics of the 120 MHz fundamental frequency: for fc = 240 MHz, each curve approximates a full cycle of a sinewave (Figure 9, middle), and 320 MHz gives 1.5 cycles (bottom).  The amplitude of VS is 1 V peak, while the maximum amplitude of the standing waves is about 7.5 V.  For frequencies not close to multiples of 120 MHz, the amplitude is much lower, as you would expect from the frequency response of Figure 7 (bottom).  The standing waves are analogous to the waves on the plucked string of a guitar (but at much higher frequencies!)[7].  For a guitar, the fundamental and harmonics are present simultaneously on the string. 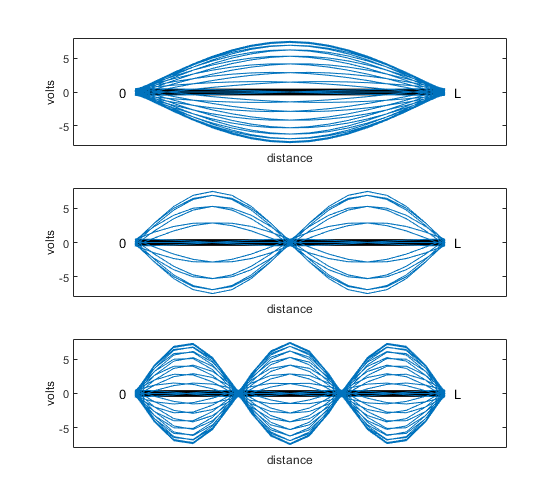 Figure 9.  Standing waves in a resonator:  cumulative plots from wave_movie.m

For Appendices, see the PDF version of this article.