Some Design and Simulation Considerations for Sampled-Data Controllers

This article will continue to look at some aspects of the controllers and electronics needed to create emulated physical circuits with real-world connectivity and will look at the issues that arise in sampled-data controllers compared to continuous-domain controllers. As such, is not intended as an introduction to sampled-data systems.

It will also document some specific electronic devices and their key parameters for a practical design, which updates an original design based on a Sharc DSP device, to a floating-point centric FPGA solution.

As ever, it should be noted that equivalent arrangements/topologies are possible and that any examples shown may not necessarily be the best or most complete solution.

Motivation for a Sampled-Data Controller

We have previously considered some ideal controller designs in the continuous s domain and described some advantages of using a controller made from small-signal components along with an amplifier in a feedback arrangement to provide emulated electronic/electrical circuits. However, that was really just a concept step to a more universal solution.

If  a controller could produce the required characteristics via mathematics/algorithms/firmware, then we would now get a flexible capability to create arbitrary (within limits) circuits along with say non-linear, time-varying & for example frequency-varying resistance characteristics not conveniently created in analogue hardware.

s vs z, MATLAB vs Simulink and an important difference

So far, we have formulated controller examples as continuous s domain transfer functions. When we move to a sampled-data z domain solution we have a lot more theoretical and practical issues to consider, the 1st of which might be that, given an s domain characteristic, how do we get an equivalent, discrete, z domain description that gives us the same characteristic ?. MATLAB provides a method called c2d with various method options, to convert s domain functions into equivalent characteristic z domain functions. For closed-loop applications, the First Order Hold(FOH) or Ramp-invariant method is recommended.

Example for comparison of s,z,MATLAB and Simulink responses 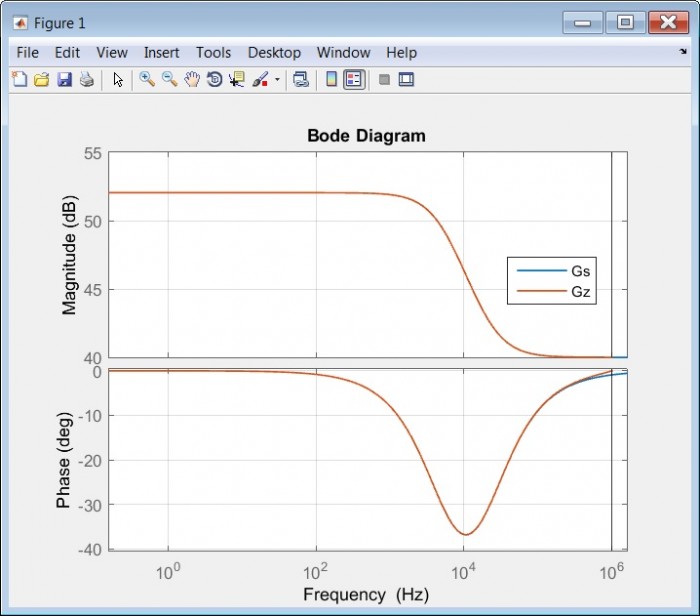 As we can see the MATLAB s and z domain plots are coincident to a high degree of accuracy, as desired.

Switching for a moment to the time-domain, here is the set-up for a Simulink model of the s domain and z domain example. 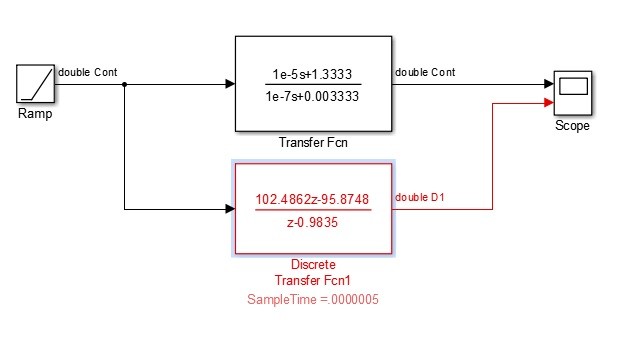 Fig 3. Simulink Model of the s and z domain example with a Ramp input.

The z domain transfer function is the result of using the FOH or Ramp-invariant option in the MATLAB c2d function and as the name suggests, the z transform response should be identical to the s domain response for a ramp input signal at the sample points.

Here are the resulting scope plots. 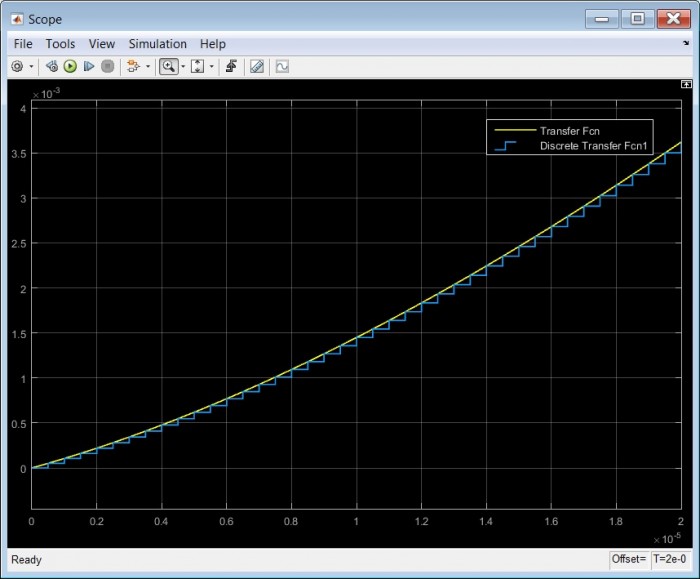 The result is as expected, the curves are coincident at the sample points.

Simulink does not provide a Bode plotter as standard so a time-domain method based on sine-wave excitation and IQ measurement of this excitation and the corresponding o/p signal was constructed. This is not necessarily efficient , but it works. 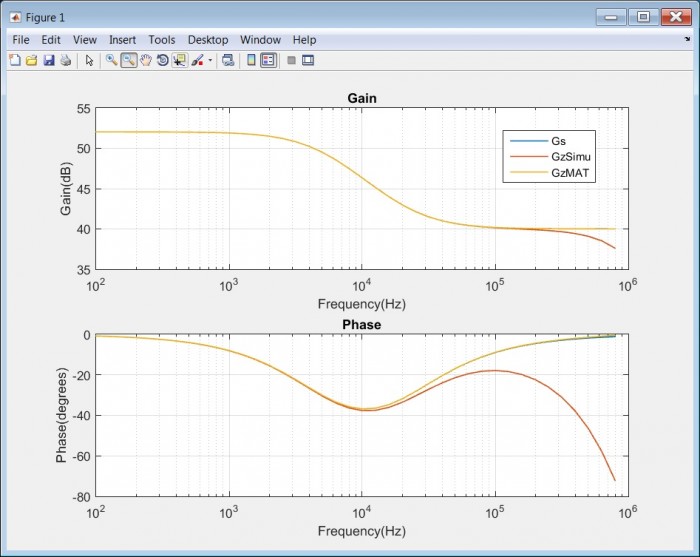 So now we have an apparent contradiction, The MATLAB Bode plot of GzMAT follows the Gs reference closely whereas the Simulink Bode Plot for GzSimu falls away from the reference at higher frequencies.

In fact we can see from the time-domain plot in Fig 4 that the average GzSimu waveform is lagging the Gs reference. As many will know, the answer to this apparent contradiction is that the MATLAB Bode plot for GzMAT considers only the sample point instances, which is an accurate but rather abstract case. The home-made Simulink Bode plot shows the true nature of the sample system output by considering the entire waveform, not just the sample points.

This is the first of our non-ideal effects caused by the move to a sampled-data controller and it is due to the holding effect of the DAC which is present even if the DAC provides perfect outputs at the sample points. This effect is know as zero order hold (ZOH).

A list of issues affecting the performance of sampled-data controllers.

Having spent a bit of time looking at the ZOH effect and noting that the MATLAB Bode plot does not include it, here is a collection with notes, of other issues that need consideration when designing a sampled-data controller and how those issues have been accommodated in a practical design.

A combination of MATLAB combined with Simulink has the ability to not only evaluate all the issues described above, but also the possibility to provide automated design processes to take a characteristic described at a high-level and then run the algorithms needed to to realise the detailed lower level filter structures and parameters.

Given the availability of the Altera/Intel DSP Builder package linking MATLAB with the Altera/Intel Quatus FPGA design suite, it is reasonable to expect that a complete end-to-end design process starting with a Performance Requirement via the Controller Design and through to the FPGA Design and Programming operation, could be constructed.

Why does the circuit emulator application require particularly demanding performance ?

There are a number of reasons that the controller performance needs to be exceptional for the circuit emulation application.

Other Applications that require exceptional controller capabilities will be considered in a future article.

A technology evaluation platform has been designed for investigating arbitrary circuit emulators and the low- latency controllers required for their construction.

For the record, I have no affiliation with any of the above mention vendors, just a keen interest in the application of science and engineering to practical applications.

Next up - will be a fuller description of the evaluation platform.