While there are plenty of canned functions to design Butterworth IIR filters [1], it’s instructive and not that complicated to design them from scratch.  You can do it in 12 lines of Matlab code.  In this article, we’ll create a Matlab function butter_synth.m to design lowpass Butterworth filters of any order.  Here is an example function call for a 5th order filter:

Then, to find the frequency response: 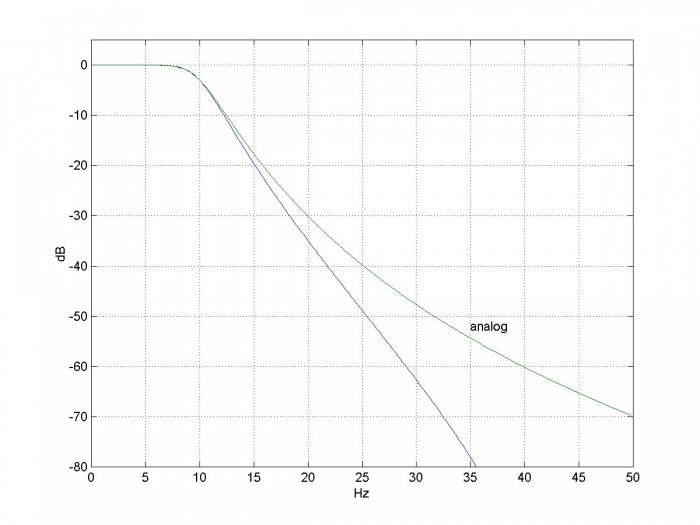 First, a word about notation.  We need to distinguish frequency variables in the continuous-time (analog) world from those in the discrete-time world.  In this article, the following notation for frequency will be used:

where the subscript a denotes analog (s-plane) poles.  The poles in the s-plane are:

where fs is sample frequency.  If we solve for z, we get:

We can now write the 3rd-order Butterworth H(z) as: 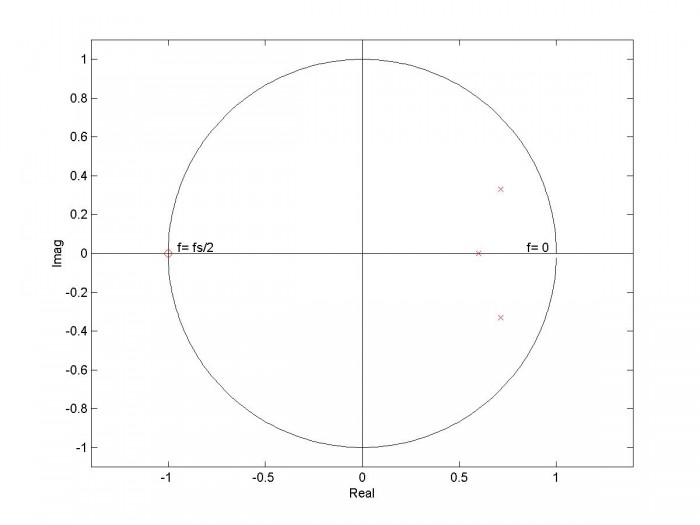 Here is a summary of the steps for finding the filter coefficients :

4.  Transform the poles from the s-plane to the z-plane using the bilinear transform.  From equation 3,

In butter_synth, we represent the N zeros as a vector q= -ones(1,N).

6.  Convert poles and zeros to polynomials with coefficients an and bn.  If we expand the numerator and denominator of equation 6, we get polynomials in z-n:

The Matlab code to perform the expansion is: 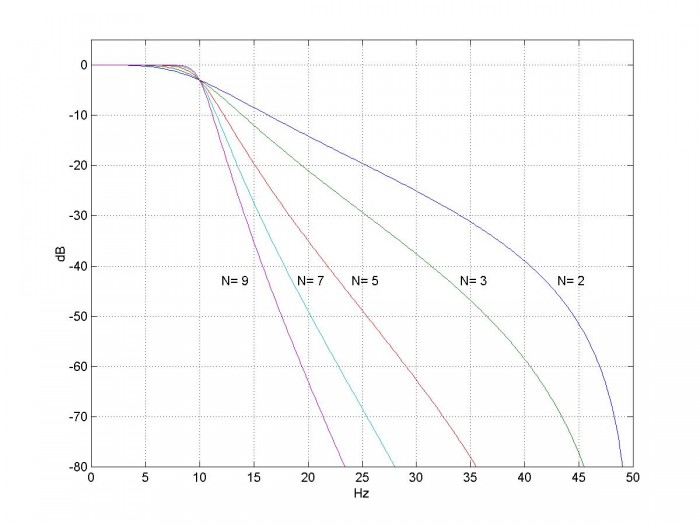 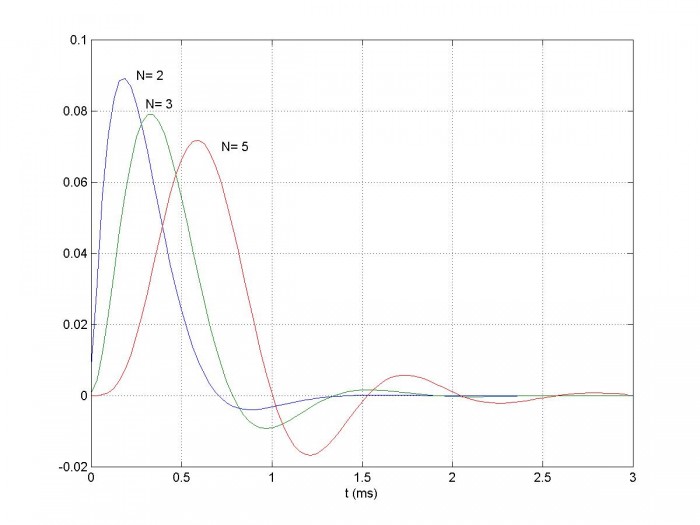 Frequency Mapping of the Bilinear Transform

The bilinear transform does not map the continuous frequency F to discrete frequency f linearly.   To show this, we evaluate equation 2 for s= jΩ and z= ejω:

Figure 5 plots equation 8 for fs= 100 Hz.  The entire analog frequency range maps to  –fs/2 to fs/2.  Also shown on the zoomed plot on the right is the transformation of discrete frequency f = 20 Hz to continuous frequency F = 23.13 Hz.  Note that the frequency mapping is approximately linear for f < fs/10 or so. 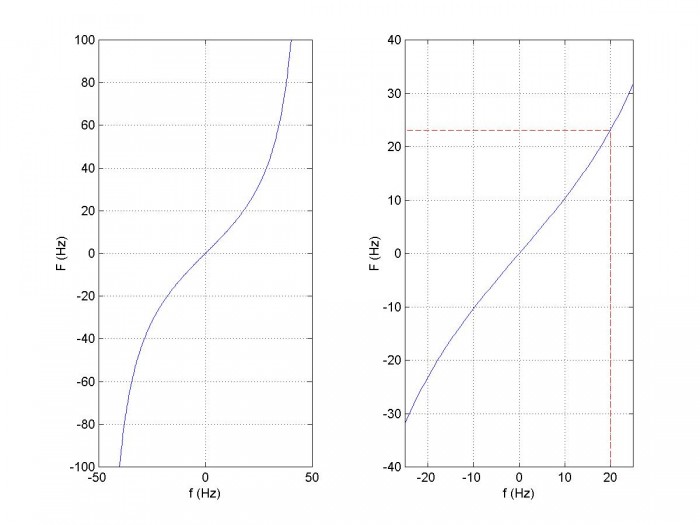 Figure 5.  Frequency mapping of the bilinear transform for fs = 100 Hz.  x axis is discrete frequency and y-axis is continuous frequency.  The right plot is a zoomed version of the left plot, showing the value of F for f = 20 Hz. 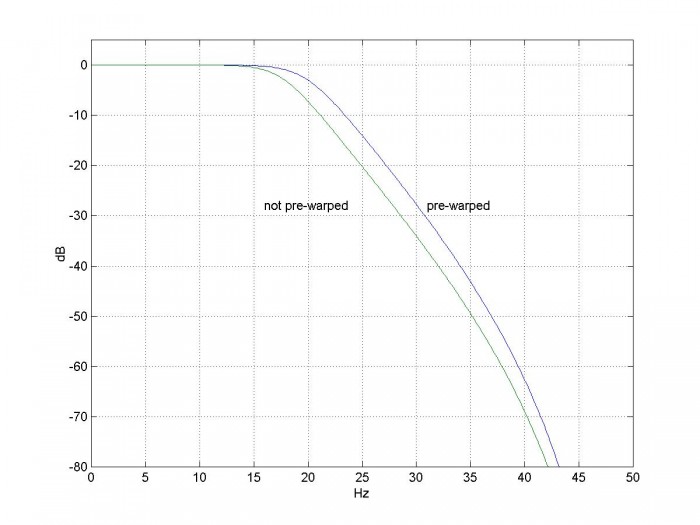 This program is provided as-is without any guarantees or warranty.  The author is not responsible for any damage or losses of any kind caused by the use or misuse of the program.

You cleared up the internal secrets of Matlab function "butter" and I got identical results using either. Great job and very useful.

Yes, I was pleasantly surprised when I ran the function and the results matched.  So now only another 99.9% of Matlab is a black box.

Clarity in your articles while dealing with fundamental concepts is great.

You're welcome, I appreciate the feedback.

I request you to do one article like this on iir notch filter (if you have time).

When I started looking for an algorithm to design Butterworth filter I wanted to escape a somewhat bug or limitation from matlab keeping me from designing filter with superlow cutt-off frequency, for instance by running the following code:

It seems going too low does not do well with Matlab, supprinsingly your code also does not work with such cut-off frequency, do you have any idea what might cause that?

Cheers and thanks again for your work

See my article on iir filter design using Cascaded biquads.  It explains the problem you are having.

I guess the improved narrowband you talk about in another article will do the trick? I am about to give it a try.

Thanks for you work !

That is a really low cut-off frequency.  What is your application?

Note that you could use a decimator (e.g. CIC decimator) to reduce your sample rate and make the problem more tractable.

The application is DC value extraction with lowest noise possible. It is means to be implemented on GS/s ADC at a low power requirement.

Maybe I'm not approaching this the right way, I should filter smarter instead of harder (with butterworth 2nd order filter)