Perhaps we should call most Power Spectral Density (PSD) calculations relative PSD, because usually we don’t have to worry about absolute power levels.  However, for cases (e.g., measurements or simulations) where we are concerned with absolute power, it would be nice to be able to display it on a PSD plot.  Unfortunately, you can’t read the power directly from the plot.  For example, the plotted spectral peak of a narrowband signal, such as a sinewave, is lower than the actual power, due to the processing loss of the DFT’s window function [1-3].  And for a modulated signal, e.g., QAM or OFDM, the spectrum occupies many DFT bins, and the total power is not obvious.

In this post, I provide a Matlab function psd_mkr that computes the PSD, plots the spectrum, and displays power using a marker.  There are three marker modes:

See Appendix A of the PDF version for the Matlab code.  The function uses the Matlab function pwelch [4] to compute the PSD.  I discussed pwelch in an earlier post [5].

The function call to psd_mkr is as follows:

The spectrum plot’s vertical range is 100 dB.  Given a signal x of length N, setting nfft = N results in a PSD without DFT averaging.  If N is a multiple of nfft, DFT averaging is performed [4, 5].  The power in dBW is calculated assuming a resistance of 1 ohm.

Note that you can plot two markers by calling psd_mkr twice, specifying a different marker frequency each time.  You must issue the command "hold on" after the first call to psd_mkr.  As an example, you can use two band-power markers to compute a modulated signal’s adjacent channel power ratio (ACPR).

Appendix B of the PDF version lists the Matlab function psd_mkr_dBm, which is identical to psd_mkr, except the power is computed in dBm (dB-milliwatts), and the load resistance is 50 ohms.

Here is an example that uses psd_mkr in normal mode.The signal is a sinewave plus Gaussian noise.Sine amplitude A is sqrt(2), with power into 1 ohm of A2/2 = 1 Watt = 0 dBW.  The Matlab code to generate the signal and plot the spectrum with marker is as follows:

The plot generated by psd_mkr is shown in Figure 1.  As expected, the marker value is 0 dBW.  Note that the peak of the spectrum is only about -2.5 dBW, due to the processing loss of the function’s Kaiser window.

The function calculates the marker level by adding the power of several bins closest to f0 = 300 Hz.  This is shown in Figure 2, where we have zoomed in on the spectral peak, and plotted the spectrum magnitude (before conversion to dBW) using a linear amplitude scale.  The spectrum is the convolution of the window’s spectrum and the sine spectrum, which causes the power to be spread over several bins.  In psd_mkr, we sum the contributions of the five bins shown in red to compute the marker value of 1 Watt = 0 dBW.  In the code listing of Appendix A (see PDF version), this is performed by the line:

Keep in mind that normal mode is only appropriate for narrowband signals with bandwidth (prior to windowing) of less than one bin.  For a signal that occupies several bins, use band-power mode instead.

As mentioned, psd_mkr uses the Matlab function pwelch to calculate the PSD.  Note that pwelch calculates the PSD in W/Hz.  psd_mkr converts these units to W/bin using the following formulas:

If you are interested in the math involved to find the power of DFT spectral components, see my post: “The Power Spectrum” [6]. 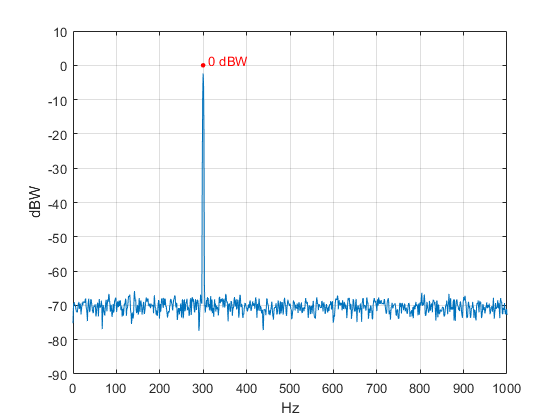 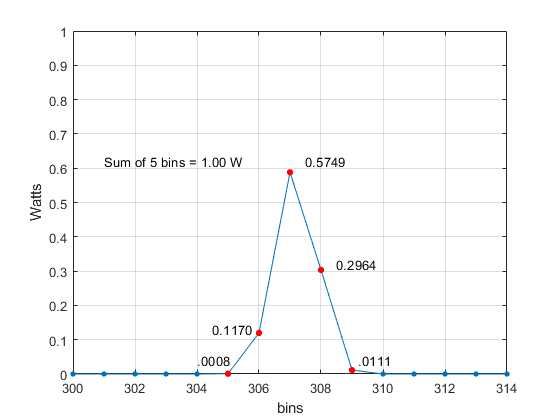 In Band Power mode, the function call is the same as above, except we include the parameter bw_mkr, which is the bandwidth in Hz over which the power is measured.  f_mkr is the center of the band.  To measure the power, the function simply adds the power in the bins corresponding to the specified center frequency and bandwidth.

The plot generated by psd_mkr is shown in Figure 3.  Each sinusoid has power of 1 watt, so the band power is 10*log10(2 W) = 3.01 dBW.  As shown, the band-power marker is a horizontal red line, centered at f_mkr, with length bw_mkr.  To view more detail, we can specify the axes as follows:

This gives the plot shown in Figure 4.  Note that the peak levels of the two PSD frequency components differ by about 0.5 dB; this is due to DFT scalloping [1].  Scalloping has no effect on the band power calculation. 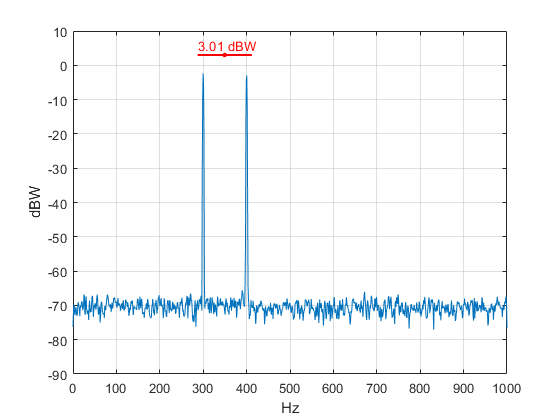 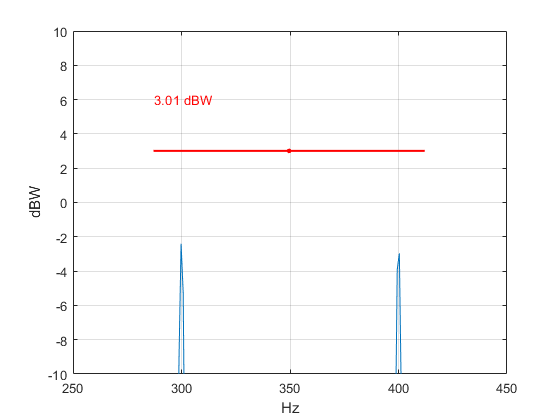 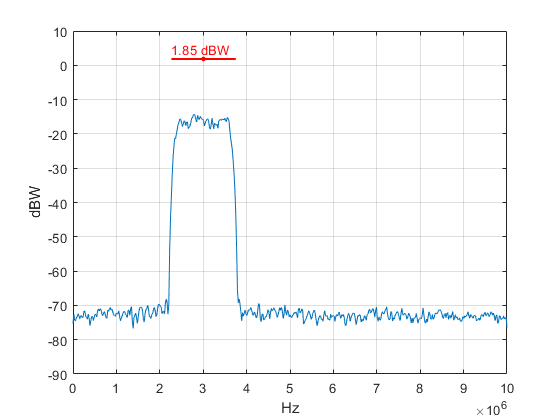 To use 1 Hz mode, set bw_mkr = 1.  The spectrum is then plotted twice, in units of dBW and dBW (1 Hz), with marker units of dBW (1 Hz).  In this example, we use the 1 Hz mode to measure noise power density.  The signal is a sinewave plus Gaussian noise.  The Matlab code is as follows:

Incidentally, the amplitude offset between the two plots in Figure 6 depends on the ratio of the power in W/Hz to that in W/bin: 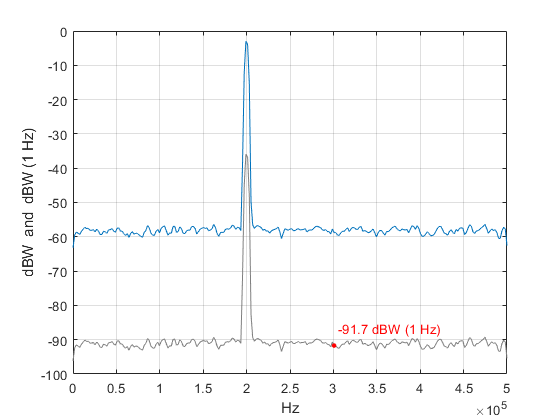 For Appendices, see the PDF version of this article.

5.  Robertson, Neil, “Use Matlab Function Pwelch to Find Power Spectral Density – or Do It Yourself”, DSPrelated.com, Jan, 2019, https://www.dsprelated.com/showarticle/1221.php