Digitizing a signal using an Analog to Digital Converter (ADC) usually requires an anti-alias filter, as shown in Figure 1a.  In this post, we’ll develop models of lowpass Butterworth and Chebyshev anti-alias filters, and compute the time domain and frequency domain output of the ADC for an example input signal.  We’ll also model aliasing of Gaussian noise.  I hope the examples make the textbook explanations of aliasing seem a little more real.  Of course, modeling of the anti-alias filter is often not a necessity.  It may be adequate to simply verify that the filter has enough stopband attenuation at the unwanted frequencies and acceptable passband performance.

The anti-alias filter is a continuous-time (analog) device, so to model the filtering and aliasing process, we need to model the analog filter H(s) using a discrete-time filter G(z) that has approximately the same frequency response.  This will allow us to examine the effect of aliases, and model passband imperfections, such as ripple and non-flat group delay.  We’ll use the approach shown in Figure 1b.  The model consists of G(z), followed by downsampling by R, then quantization.  G(z) thus has a sample rate of R times the ADC sample rate fsadc.  R is an integer greater than or equal to 2.

where fsadc is the sample rate of the ADC.  We’re interested in any alias that falls in the first Nyquist zone.  Figure 2c shows the aliases of the component at fh.

Now consider the digital filter G(z).   Since we are trying to model an analog anti-alias filter, we must minimize aliasing of any significant frequency component in the digital model.  For our example signal, the highest-frequency significant component occurs at fh, which is in the 3rd Nyquist zone.  This zone extends to 1.5*fsadc.  So, in this case, we can prevent aliasing of this component in the digital filter by operating the digital filter at twice this rate, or 3*fsadc.  If a component at the output of H(s) is at a sufficiently low level, it can be omitted from the simulation:  e.g., the component shown at fx.  The model of Figure 1b produces significant aliases only in the downsample-by-R block, which models the sampling process of the ADC.  In this example, R = 3.  We have assumed that the ADC frequency response is flat up to fh. 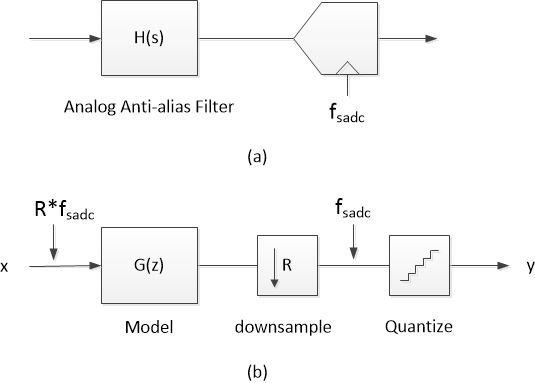 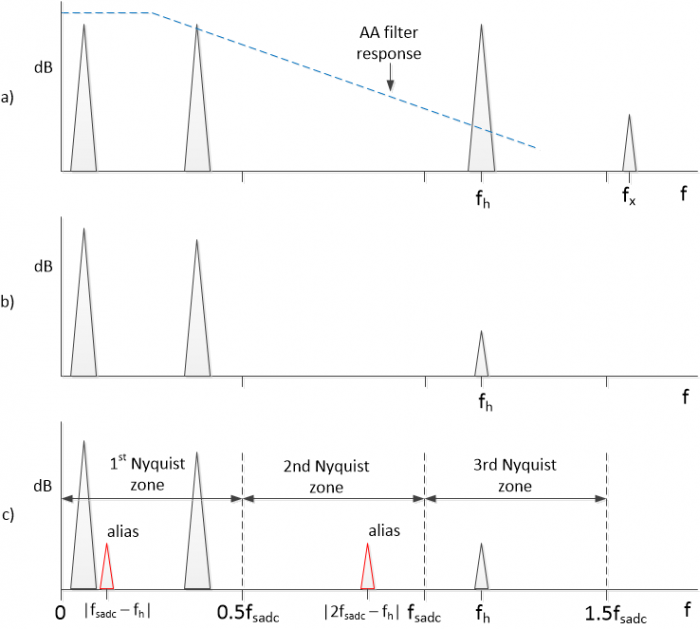 The next task is to find a model G(z) for a given anti-alias filter.  In this article, we’ll consider Infinite Impulse Response (IIR) Butterworth and Chebyshev lowpass filters.  I provide two short Matlab functions that generate the filter coefficients (see Appendices A and B of the PDF version).  If you need to model elliptic filters, try the Matlab function ellip.  Note that we won’t be modelling ADC impairments.

Anti-alias filters can take many forms, some of which are easier to model than others.  Here, we’ll limit ourselves to Butterworth or Chebyshev lowpass filters.  We’ll make the simplifying assumption that the modeled analog filters have ideal responses.  Thus, we are not taking into account component value error, Q, stray inductance, or stray capacitance.  We need to be aware that these factors can be significant for high-order filters or at RF frequencies, reducing the accuracy of the model.  There is a brief discussion of LC analog filter design in Appendix D of the PDF version.

We’ll use the s-plane poles of the analog filter to find the coefficients of our filter model G(z).  There are two main methods for generating G(z):  bilinear transform and impulse invariance [2].  For an anti-alias filter, we care about accuracy of both the passband and stopband of the model.  After all, the level of the aliased signals depends on the filter stopband.  It turns out that the impulse invariance method gives a more accurate model.

As an example, the magnitude response an ideal analog Butterworth filter of order N is given by [3]:

where ω is radian frequency.  Figure 3 plots an example 5th-order Butterworth magnitude response, along with |G(z)| using the bilinear transform and impulse invariance methods.  Clearly, impulse invariance is the best choice for modeling the stopband, but it’s not perfect:  the model response departs from the analog response for f > 40 Hz or so in this example.

We’ll use two simple Matlab functions that employ impulse invariance: butter_impinvar (Appendix A of the PDF version) generates coefficients for Butterworth filter models and cheby_impinvar (Appendix B) generates coefficients for Chebyshev filter models.  Both of these functions rely on the Matlab impulse-invariant digital filter synthesis function impinvar, which I discussed in an earlier post [4]. 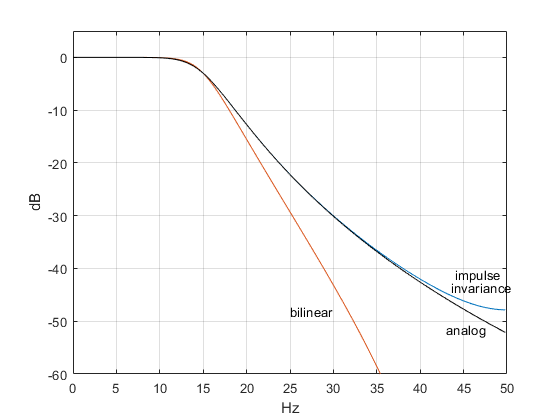 In this example, we’ll model a 5th order Butterworth anti-alias filter with multiple sinusoidal inputs, with the highest frequency input at 85 Hz and fsadc = 100 Hz.  85 Hz is in the 2nd Nyquist zone, so we can avoid aliases in the filter model by using fs = 2*fsadc.  For simplicity, we’ll ignore ADC quantization in this example.

Here are the simulation parameters:

We will compute spectra of the input signal, filter output, and ADC output.  Keep in mind that the simulation computes the discrete-time output y, which could also be used in a time-domain simulation (e.g., receiver interference simulation).  The Matlab code to simulate the filter is as follows.  The function butter_impinvar(order,fc,fs) computes the digital filter coefficients, given order, -3 dB frequency, and sample frequency.  The function’s code is listed in Appendix A of the PDF version.  The code for the function psd_kaiser is listed in Appendix C.

Simulation results are shown in Figure 4.  Since fsadc = 100 Hz, any component above 50 MHz will produce an alias.  At the output of the filter (Figure 4c), the component at 85 Hz has amplitude of about -56 dB.  After downsampling, this aliases to 15 Hz, as seen in Figure 4d.

Finally, note that the filter model in this example has a few dB of error in the stopband response for input frequencies between 95 and 100 Hz.  If we had frequencies in that range, we could obtain more accuracy by using fs = 3*fsadc (R = 3). 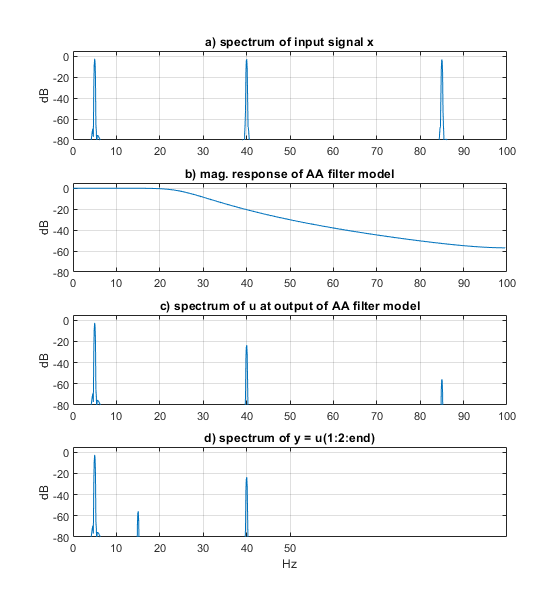 For a given filter order, either a Butterworth or Chebyshev analog filter uses the same number of components, but a Chebyshev filter has better stopband attenuation.  The price you pay for the improved stopband attenuation is ripple in the passband.  While a Butterworth filter is defined by order and cutoff (-3 dB) frequency, a Chebyshev filter is defined by order, passband ripple in dB, and either ripple band edge frequency fr or cutoff frequency fc. 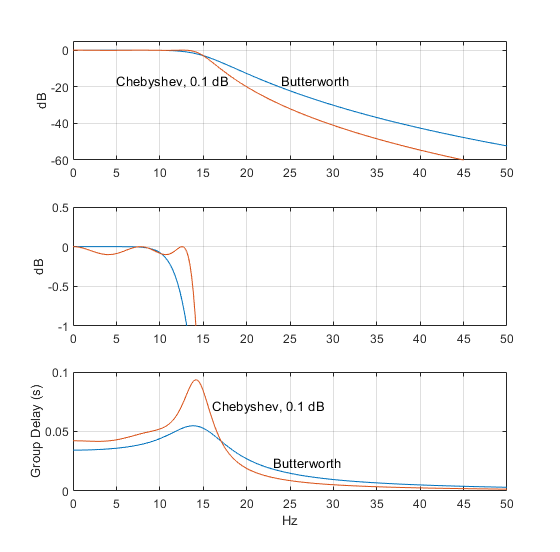 In this example, we’ll use the same simulation parameters listed in Example 1, but we’ll substitute a 0.1 dB Chebyshev filter of the same order for the Butterworth filter.  The function cheby_impinvar(order,RdB,fr,fs) computes the digital filter coefficients, given order, passband ripple in dB, ripple band edge frequency, and sample frequency.  The function’s code is listed in Appendix B of the PDF version.  For the Chebyshev filter, we want to match the Butterworth -3 dB frequency of 25 Hz.  To do this we have to set the ripple band edge frequency fr to a lower value, as shown. 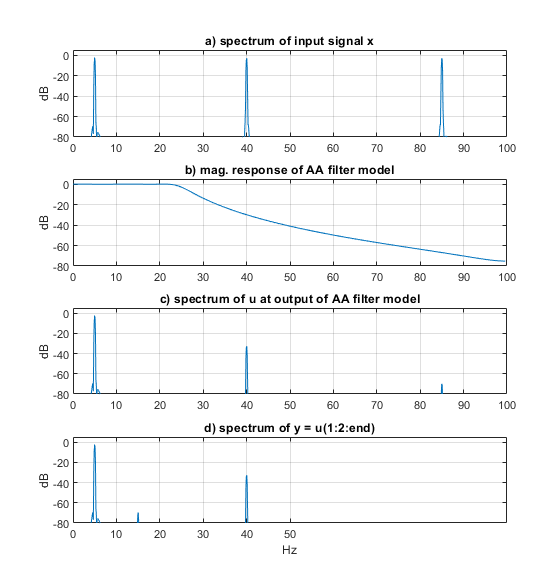 If you apply a signal with Gaussian noise directly to a wideband ADC, the noise above the Nyquist frequency creates aliases that raise the noise floor at the ADC output.  So even with no obvious signals at frequencies above fsadc/2, aliasing may be important.  For our example we’ll model the Analog Devices AD9608 10-bit ADC, which has a maximum sample frequency of 125 MHz and bandwidth of 650 MHz [5].  We’ll let fsadc = 125 MHz.  The input signal is a sinewave at 21 MHz with added Gaussian noise.  We’ll look at the output noise spectrum without and then with an anti-alias filter.

In the Matlab code below, we represent the ADC’s frequency response by using a 2nd order Butterworth lowpass with fc = 650 MHz.  We’ll use R = 16, giving filter model fs = 16*125 MHz = 2000 MHz.  The function butter employs the bilinear transform to generate the coefficients, so the stopband is not that realistic.  However, exact stopband response is not critical when filtering noise, and using butter allows a lower sample rate in the model compared to a more realistic first order impulse-invariant filter.  For the spectrum calculations using psd_kaiser, we let nfft = N/8, where N is the number of time samples in the signal.  This is done to provide psd averaging, which smooths the Gaussian noise spectrum.

The Nyquist bandwidth of the ADC is fsadc/2 = 62.5 MHz.  The ADC bandwidth of 650 MHz is approximately 10*fsadc.  Sampling causes the noise in 9 Nyquist zones to alias to the first Nyquist zone and add to the noise in that frequency range.  We thus expect the output noise floor to rise by a factor of 10 or 10*log10(10) = 10 dB relative to the analog signal’s noise floor.

Figure 7a shows the spectrum at the output of the ADC response model, with a -3 dB point at 650 MHz.  Figure 7b shows the ADC output spectrum (Both spectra have the same Hz/bin).  As expected, the ADC output’s noise floor is about 10 dB higher than the analog signal’s noise floor.  We see that wide ADC bandwidth can have an unintended bad effect on SNR. 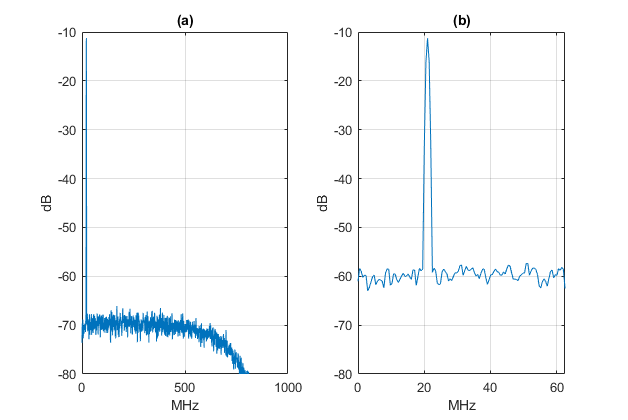 A simple anti-alias filter can prevent the noise aliasing seen in Figure 7b.  The following code uses butter_impinvar to compute the coefficients of a 3rd order Butterworth lowpass filter with fc = 40 MHz.  The sample frequency fs is the same as in the above code: fs = R*fsadc = 16*125 MHz = 2000 MHz. 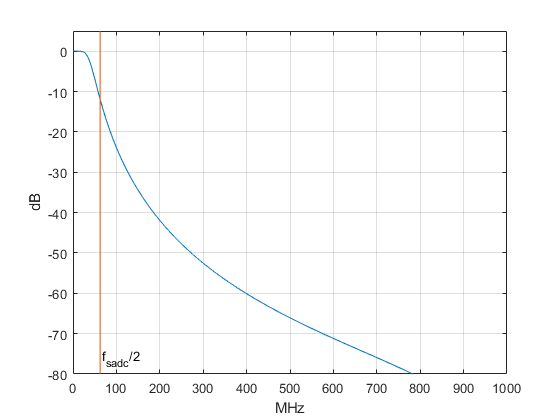 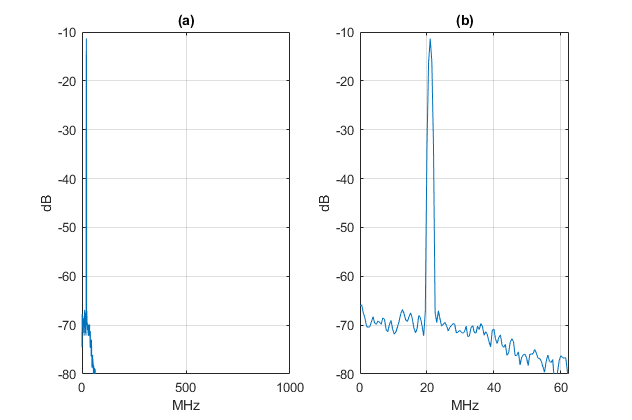 For appendices, see the PDF version of this article.