A modification of the Farrow structure with reduced computational complexity.
Compared to a conventional design, the impulse response is broken into a higher number of segments. Interpolation accuracy is achieved with a lower polynomial order, requiring fewer multiplications per output sample at the expense of a higher overall number of coefficients.

This code snippet provides a Matlab / Octave implementation.
And here is the same in C, with explicit sample-per-sample calculation that allows varying the output rate even during operation (the Matlab version is vectorized).

A Farrow structure resamples a signal at an arbitrary, possibly time-varying sampling rate. It utilizes a piecewise polynomial approximation of a continuous-time impulse response.

The proposed variant uses multiple segments per tap instead of one. This may allow to achieve the same accuracy with a lower order polynomial.

The performance of a Farrow resampler depends mainly on

Fig. 1 shows an example for an impulse response implemented in a conventional Farrow resampler.
Each segment corresponds to one sample of the input signal at a time. The resampler interpolates the impulse response at the sample duration, multiplies with the sample sample and sums the resulting product over all taps at the output.
To calculate the next output sample, the input stream is shifted, for example by 1/3 sample for an output rate that is 3x higher than the input rate. Either a sample stays within its impulse response segment, or it moves to the next tap (segment) by shifting the delay line.

Since the shape of an impulse response can be rather complex over the duration of one segment, a high-order polynomial is required to approximate it with the required accuracy. The arrows in Fig. 1 point out an example segment. 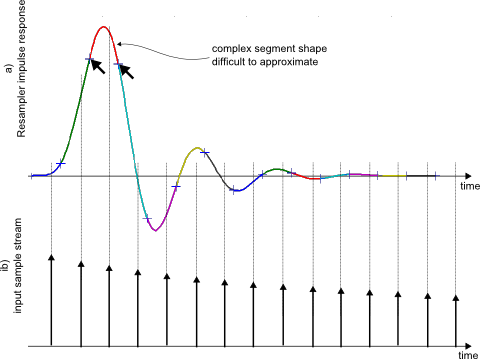 Fig.1: Resampler impulse response segments (a) and input signal (b)

The proposed structure breaks each segment of the impulse response into n sub-segments. This is shown in Fig. 2, with n=2. Since segments become shorter, an accurate approximation can be achieved with a lower-order polynomial. 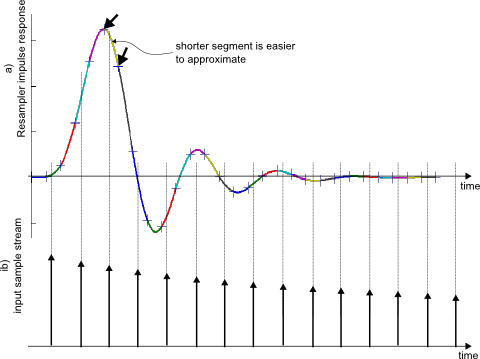 Fig.2: Resampler impulse response broken into sub-segments (a) and input signal (b)

Only every second impulse response segment contributes to the output signal at any given time. Therefore, the number of taps remains unchanged. The interpolator can use bank-switching between alternative polynomial coefficient sets in each tap.

The bank-switching concept can be understood in terms of a conventional polyphase FIR interpolator, which is recalled below:

As shown in Fig. 3, interpolation by an integer factor n can be performed by inserting (n-1) zero samples and subsequent FIR filtering.
Zero samples do not contribute to the output of the FIR filter and their location in time is always known. Therefore, the structure can be rearranged into the polyphase arrangement in Fig. 4. The term "polyphase" highlights that each coefficient bank generates a different "phase" of the signal, that is, a replica that is delayed by a varying amount. 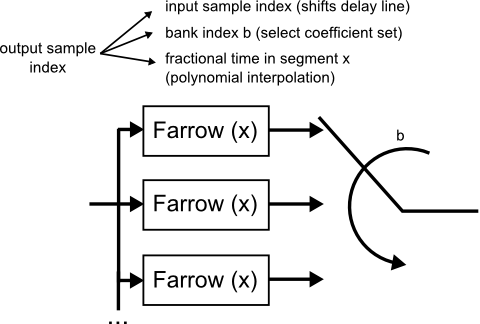 The time instant of each output sample is split into:

The calculation is explicitly written out in the C implementation.

A Farrow interpolator that requires 3rd or higher approximation order may be a good candidate for bank switching. Reducing 2nd order to linear is usually not practical, since the number of sub-segments needed to maintain accuracy grows too large. These numbers should be taken with caution, since accuracy requirements may differ by several orders of magnitudes, depending on the application.
In any case, some trial-and-error with alternative designs may be useful to find the best solution. Your mileage may vary.

what can be the possible choice of the bank index? can it be the interpolation factor?

edit: thinking about your question again: It's equivalent to interpolation by an integer factor (zero sample insertion) before the structure, if that's what you meant.

Now if the interpolation factor implemented by the structure (!) is an integer, the problem reduces to a plain polyphase filter with fixed coefficients (e.g. a FIR structure with as many "banks" of coefficients as there are "phases" of each input sample = interpolation factor). In that sense I'm not sure I understand the intent behind the question.

But let me take back a step from this 10-year old article. To recap,

The mathematical concept behind this is "piecewise polynomial approximation": I can use higher-order polynomials to approximate some function more accurately, or I can chop it into segments which I approximate with lower-order polynomials. There is usually a fairly obvious "sweet spot" in the trade-off - too high polynomial order becomes computationally brittle, and increasing the number of segments improves performance only slowly, which won't help if I need order-of-magnitude improvement.

One practical approach to piecewise poly approximation is "splines", which turns out to work very well with regard to the spectrum of the approximation error. An alternative approach is discontinuous segments: This gives lowest RMS error but the discontinuities cause an error term that is white across the spectrum, so the filter will have a near-constant alias noise floor. This may or may not be what makes sense in a specific design problem.

So what I'd do is