This article is the documentation to a code snippet that originated from a discussion on comp.dsp.

The task is to design a root-raised cosine filter with a rolloff of a=0.15 that interpolates to 64x the symbol rate at the input.

The code snippet shows a solution that is relatively straightforward to design and achieves reasonably good efficiency using only FIR filters.

The most straightforward approach uses an upsampler (insertion of zero samples) and a long FIR filter. The FIR filter performs a double role for pulse shaping and anti-aliasing.

While unproblematic in Matlab, the solution is not acceptable for any real-life application: 63 out of 64 times, an expensive multiplication is performed with zero, which does not contribute to the output at all. 2500 multiply-and-accumulate (MAC) operations are required for each output sample. That's a lot.

Now the location of zeros in the filter is known at any time. This can be exploited to reorganize the FIR filter into a more efficient polyphase structure:

The computational effort in a polyphase filter reduces to 39 MACs / output sample. The solution is still quite inefficient for a narrow-band signal because the polyphase filter generates every single output sample “from scratch”, based solely on the input data, without utilizing any similarities or common terms between nearby output samples.

Also, the high number of coefficients could be problematic (note that all given coefficient counts could be divided by two in a hardware implementation due to the symmetry of the impulse response)

The implementation from the code snippet takes the following approach:

It requires only 4.69 MACs/output sample, or 12 % of the polyphase design. The number of coefficients reduces to 102.

The following “features” can be recognized:

Further, the “testbench” in eval_RRC_resampler.m shows how to determine the frequency response of a multirate structure and its frequency-dependent in-channel error vector magnitude.

To understand both pulse shape filtering and sample rate conversion, it may be useful to recall that a digital signal represents a sequence of infinitely narrow pulses at the sample locations.

The spectrum contains an infinite number of replicas, or “aliases”, at multiples of the sampling rate:

Inserting zeros between existing samples, as done by the upsampler

While “adding zeros” does not actually alter the signal, the following filter stage gains the ability to change the zero values to non-zero ones:

The following signal illustrates both the spectrum and its periodicity of a narrow-band signal before and after upsampling by a factor of four (insertion of three zero samples per original sample):

Figure: Periodicity at a signal at different sampling rates

The spectrum remains unchanged, but the following filter stage gains the ability to manipulate aliases independently within the larger bandwidth corresponding to the higher sampling rate (lower arrow).

The final stage of the design will serve as an example for sample rate conversion. It consists of a 4x upsampler and the “ip4” FIR filter:

The passband is quite narrow in comparison to the output rate of 64. The “ip4” filter is designed for flat gain only within the narrow passband, and stopband attenuation only within the three alias zones. Note that in the drawing, one alias zone appears “split” at both lowest and highest frequencies.

Most of the bandwidth is covered by “don't care” regions, where no signal energy is present at the filter input, and the filter response does not matter.

The general idea behind pulse shaping is to take one sample representing a symbol at a time, and generate a narrow-band pulse for transmission. For example, the picture below shows a raised-cosine filter with a=0.5 rolloff. 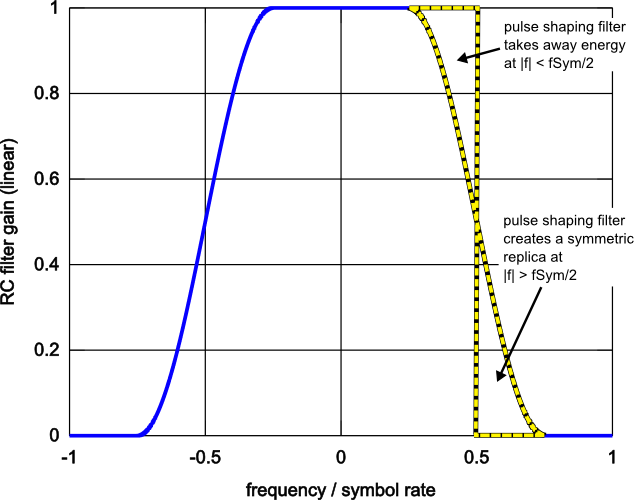 The filter removes some signal energy within the bandwidth corresponding to the symbol rate (+/- 0.5 in the picture), but allows some excess bandwidth at higher frequencies. If both “corners” are symmetrical, the signal can be sampled without intersymbol interference. Usually, the symmetric response is split between transmitter and receiver ( root-raised cosine filter), and the pulse shaping filter is not exactly symmetrical around the symbol rate.

For an ideal (root)-raised cosine filter, the frequency response is zero for frequencies beyond (1+ a) times the symbol rate.

The signal energy in the “corner” for f > 0.5 originates from the adjacent alias. Thus, the signal in the pulse shaping filter needs to be oversampled to allow independent manipulation of the alias.

The design targets for a pulse shaping filter typically demand a limit on in-band distortion, which is caused by amplitude ripple in a symmetric FIR filter. Further, a spectral emission mask limits unwanted emissions at stopband frequencies. If the signal is intended for wireless transmission and a power amplifier is involved, the pulse shaping filter should be significantly “overdesigned” in the stopband (for example by 10+ dB) to leave more “budget” for distortion products from the power amplifier.

The picture shows the design targets from the RRC_design.m script (download: code snippet) and the resulting frequency response..

It can be clearly seen that the impulse responses of rate conversion stages later in the chain get shorter, as the allowed transition bandwidth gets larger: 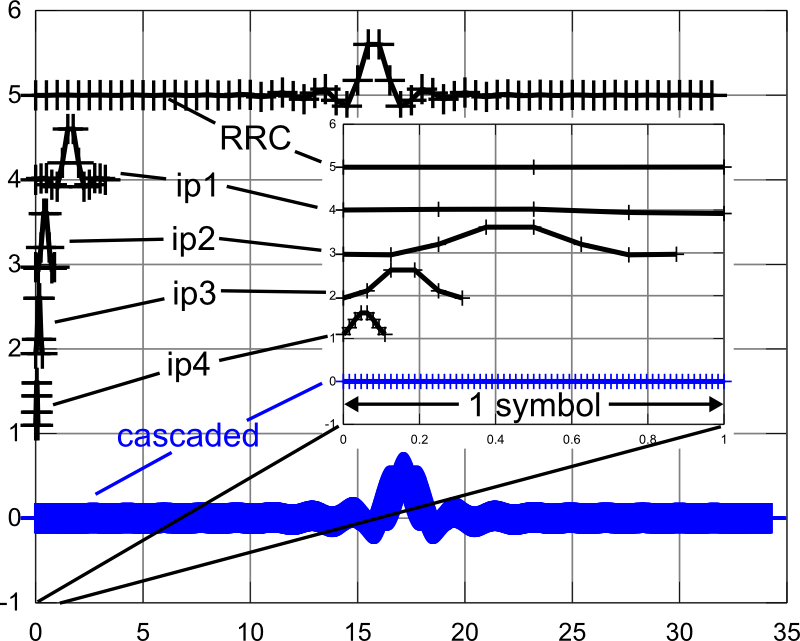 Even though the impulse responses of the final stages are short, they are far from negligible with regard to the computational effort, as they run at a much higher sample rate than the first stages.

As a general rule, it is often a good design strategy is to implement all filtering at the lowest possible rate.

The testbench eval_RRC_resampler.m from the code snippet evaluates the impulse response of the design by performing the upsampling- and filtering operations on a unity pulse test signal. The test signal is longer than the cascaded impulse responses of all stages, thus no truncation error is introduced.

The signal may be considered a regular stream of pulses that repeats after the (arbitrary) length of the test signal). Under that assumption, test signals are cyclic and bandlimited, which allows to represent them exactly via a finite set of Fourier coefficients. Thus, performing a simple FFT will convert freely between time- and frequency domain, without the need for windowing and without introducing error other than numerical inaccuracy.

An ideal root-raised cosine filtered reference signal is acquired by performing RRC-filtering on the test pulse in the frequency domain. Again, under the assumption that the test pulse is one cycle of a periodic sequence, there is no approximation involved: The impulse response has infinite length, but it is allowed to extend into previous and following cycles. It wraps around.

Now with the response of an ideal RRC-filter as reference signal, it is time-aligned with the filter output using the method described here (code here). The difference is considered unwanted signal energy, and can be further divided into in-channel error (distortion to the wanted signal) and aliasing (unwanted emissions at out-of-channel frequencies).

The time alignment minimizes the least-squares difference between the signals. In other words, no other time alignment would result in a a smaller overall error energy.

The spectrum of the in-channel error is plotted. The integrated energy over all frequencies, relative to the wanted signal, gives the error vector magnitude (EVM) in dB. It could be converted to units of percent using EVM_percent = 100*10^(EVM_dB/20).

Left +++ line: better than -43 dBc in-channel error at any frequency. 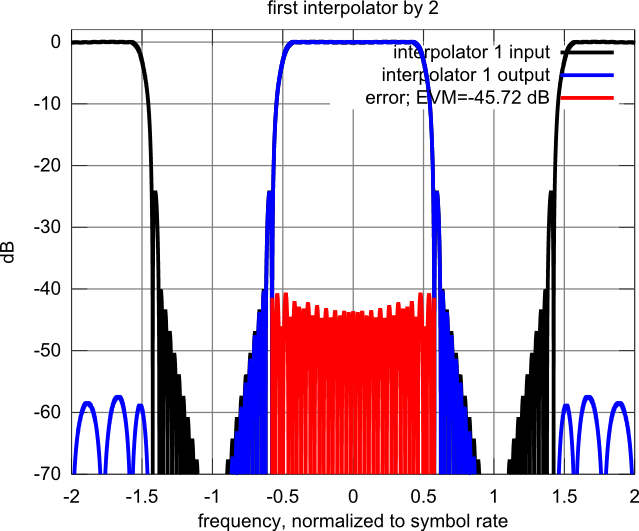 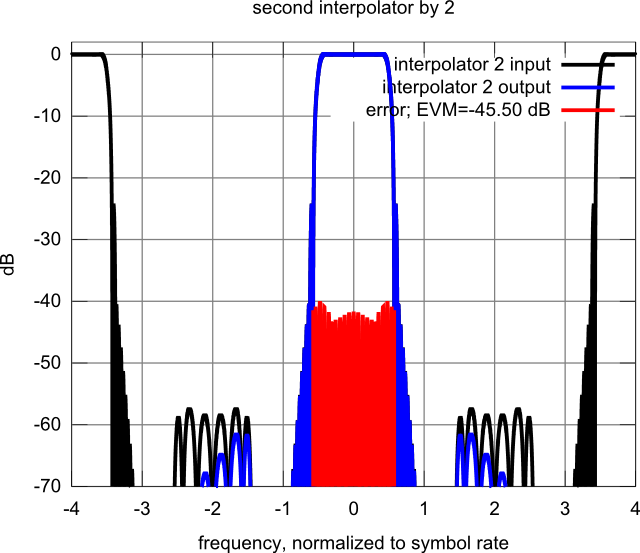 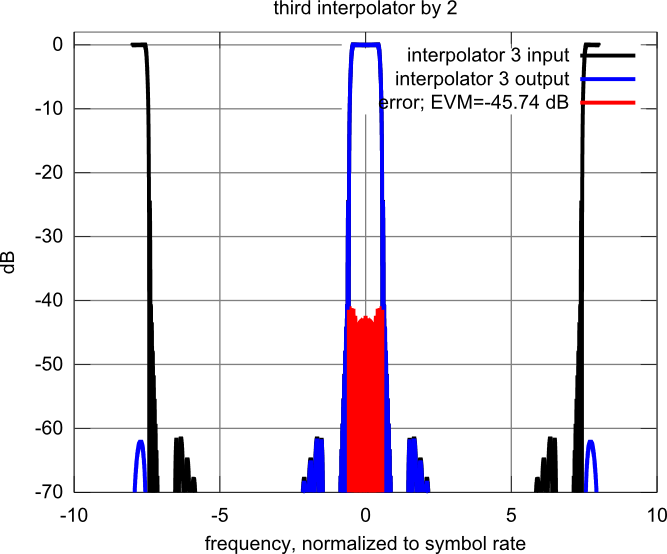 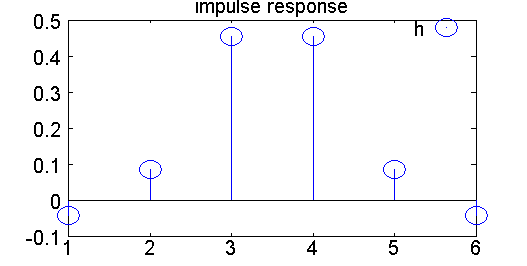 In a polyphase implementation, every second input sample is zero. Three multiplications are required for every output sample. 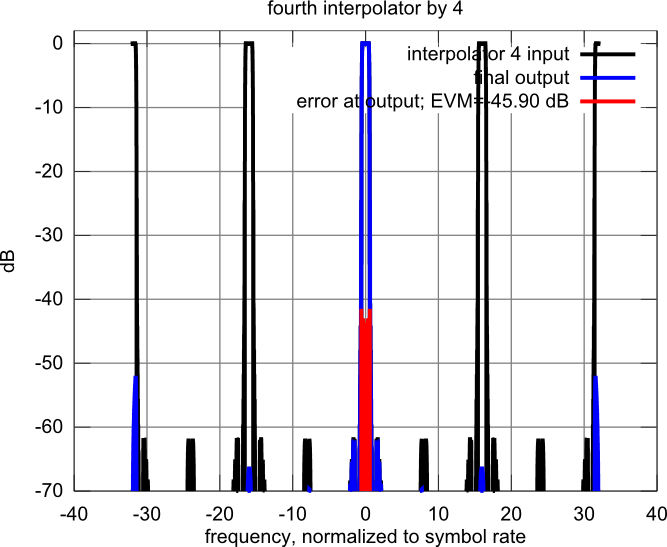 Even though the final stage uses only two MAC operations per output sample in a polyphase implementation, it accounts for 42 % of the MAC operations of the whole design. It is a prime candidate for further optimization, for example for replacement with a CIC-type filter.

The overall in-channel error is consistent with the design specifications of the individual stages. Nonetheless, at a few frequencies, the errors add up constructively.

The in-band error can be improved by equalizing the frequency response of the sample rate conversion in the pulse shaping filter.

This is implemented in the code snippet as option:

Use of the equalized pulse shape filter improves the average in-channel error by 1.3 dB and the peak error by more than 3 dB at no additional cost. The downside is that the design process gets more complex.

Lacking accurate requirements, the design has not been optimized extensively for use of equalization. By using equalization more aggressively, it may be feasible to chop away a couple of taps from the rate conversion filters.

The picture below shows the error spectrum at the output of the equalized design:

The design target for the in-channel error of the equalized RRC filter in design_RRC_filter.m is -43 dB.

Also the simulated peak error at the output of the design from eval_RRC_resampler.m is -43.0 dB. This confirms that the equalized filter works as expected.

The design process is somewhat lengthy but in the end quite straightforward, to the point where it could be automated (add a couple of iteration loops to the design scripts to iterate the required number of taps per stage).

At least for the given example, the savings over a plain polyphase implementation are substantial. A further reduction in computational load is possible, if the sample rate conversion is partly replaced with a non-FIR type filter (i.e. CIC).

Hi Markus, In FPGAs, if we have to use 2240 taps rrcos to upsample by 64 then we break the filter into 64 polyphases each requiring 35 tapss only. Then the zero multiplications are ignored. This will require only 35 multipliers if parallel. The main resource requirement is the memory size which could be reduced by half by exploiting filter symmetry. Kadhiem
[ - ]
Comment by mnentwig●December 27, 2011

Hello, good point. The difference becomes visible once I assume that the samples represent a continuous-time waveform and attempt to reconstruct it with an ideal lowpass filter. That is, by convolving with the impulse response, which is effectively some integral over the sample sequence The zero values don't change the result of the integration. But since there are now twice as many samples, the bandwidth of my Nyquist-limit reconstruction filter doubles. And this will indeed give a different result after the filter. So if I look at the Dirac pulse stream before a reconstruction lowpass filter, zero samples are invisible and "it makes no difference". There is already an infinite number of alias bands. Now if I observe them through a Nyquist-limit ideal reconstruction lowpass filter whose bandwidth is tied to the sampling rate, then the sampling rate implicitly increases and I observe one additional alias band in the continuous-time waveform per inserted zero sample . I hope this clarifies somewhat. I'll think about a better explanation for the mentioned sentence.
[ - ]
Comment by mnentwig●April 3, 2012

Follow-up: A similar example can be found in TI's DAC3484: http://www.ti.com/lit/ds/symlink/dac3484.pdf pages 53-55. The use of half-band type filters further reduces the computational overhead (every 2nd sample in table 7 is zero).