An interpolating FIR filter can be implemented with a single tapped delay line, possibly going forwards and backwards for a symmetric impulse response. To optimize it further, I need to understand only a few things, namely "cascade" and "Nobel" identities, transposed filter structures and how to spell "polyphase decompostition".
Or maybe I forget everything about theory and just look at the implementation, which seems rather straightforward. Even obvious, after staring at it for an hour (do not blink).

Figure 1 shows a 1:3 interpolating FIR filter at a conceptual level.
After every input sample x, two zero samples are inserted.
z-1 refers to a delay at the high (output) rate.
The delay line contents in the middle of the picture illustrate, how the non-zero input samples and inserted zeros move through the delay line at three consecutive time instants.
For interpolation-by-three, the filter cycles through three 'phases', where different taps hold the non-zero samples. 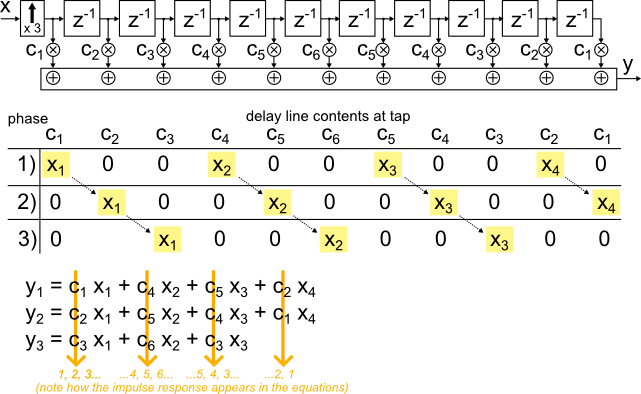 Clearly there is no point in performing expensive multiplications with (non)-samples that are known to be zero (BUT: this is perfectly fine for Matlab coding, as long as it helps to keep things 'simple and stupid'. Usually it does).
The equations at the bottom of Figure 1 show only remaining terms, if products with zeros are omitted.
The three output samples y1, y2 and y3 are calculated for each input sample (the x before zero insertion), as the interpolating FIR produces three output samples per input sample.

Instead of inserting zeros and then carefully multiplying around them, the structure can be rewritten using "slower" delays z-3 at the input rate (=> zzz => the sample goes to sleep for a while. Ahem.).
Now three output samples are generated for each step of the delay line, as shown in Figure 2: 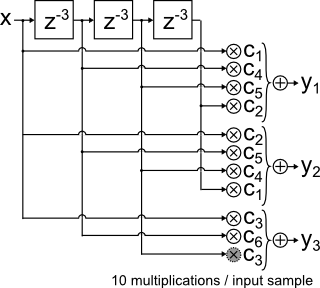 So far so good.
The implementation in Figure 2 is maybe the most common way to implement such a filter.
But, there is an alternative: 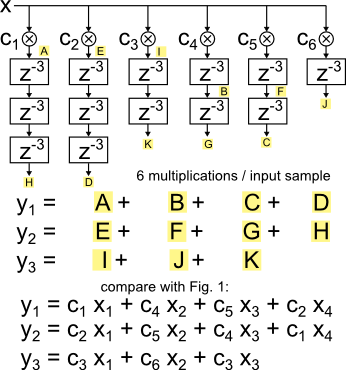 Figure 3 uses individual delay lines for each coefficient. The structure can always be implemented using one multiplication per independent coefficient and input sample.
The number of multiplications has been reduced from 10 to 6. And if the center tap can be fixed to 1, as is common, it improves from 9 to 5, which is even better.

This article shows a polyphase FIR interpolator for symmetric impulse responses that uses fewer multiplications than the textbook 'single-delay-line' implementation, in the example only two per output sample.
Does it make sense? Possibly "yes", justified by the application-dependent cost of multiplications.
In real life, "cost" is rarely as straightforward, but it may be worth having a look at.
For example, [1] (Fig 2.4) shows an application where a "non-canonical" polyphase structure can be beneficial.
Possible savings differ, depending on interpolation factor and filter length. 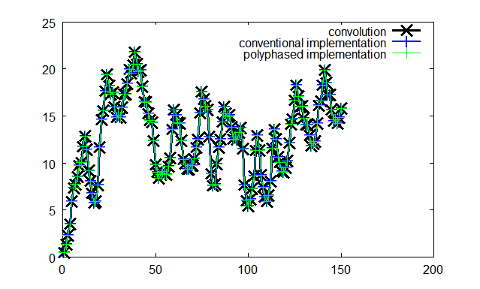 Hi Markus, For an interpolator (usually polyphase structure), the number of multipliers = ceil(taps/I/folding factor). Where I = interpolation factor and folding factor is system floor(clock/sample rate). Thus in your case I expect 10/3/1 = 4 or even 3 if peak tap is power of 2. With the polyphase structure, we only need one delay line equal to taps/I and the symmetry is lost but it stays as most efficient approach. Kadhiem
[ - ]
Comment by mnentwig●September 15, 2012

That seems ok. The point you are raising is multiplications per output (or input). The point I am raising is multipliers per output(or input). It depends on perspective. Mine is FPGA and we focus on the latter. May you are concerned about speed or power consumtion. Thanks. By the way, your index of coeffs is not right (possibly typing error) in Fig 2 Kadhiem
[ - ]
Comment by mnentwig●September 15, 2012

Hello, in the end, it boils down to how many multiplications per second I need for a given signal. Compared to a "canonical" implementation, the above proposal should need about half.
[ - ]
Comment by mnentwig●September 15, 2012

Oops it is the way you indexed for symmetry, a bit confusing, I would normally use h1 ~ h11 rather than repeat the second half with same index of first half. Sorry.
[ - ]
Comment by mnentwig●September 15, 2012

Hello, the whole exercise works only if the impulse response is symmetric, because I exploit c7 = c5 etc. I'll point out the need for symmetric IR more clearly in the introduction. Fortunately, I'd expect that the typical polyphase FIR impulse response is symmetric: If I need asymmetry to equalize group delay, I could do that more efficiently at the low rate.
[ - ]
Comment by kaz●September 15, 2012

Hi Markus, Just to confirm what I said about FPGA perspective. Given the choice of 4 multipliers for entire fir design or 6 multipliers, any fpga designer will certainly choose 4. The 3 outputs will take turns to use same 4 multipliers. It seems that the perspective of dsp (software as opposed to fpga dsp) is different. I can imagine that in terms of power consumption, yes 6 multiplications per input may be favoured over 4x3 per input. Kadhiem
[ - ]
Comment by mnentwig●September 15, 2012

I think most DSPs actually handle a multiplication in one clock cycle. If so, I'd expect that multiplications don't matter at all. But on an ASIC; for example, an algorithm that uses fewer multiplications for a given processing job can save quite a bit of silicon area, as that's where the money goes.