Abstract: Dispersive linear systems with negative group delay have caused much confusion in the past. Some claim that they violate causality, others that they are the cause of superluminal tunneling. Can we really receive messages before they are sent? This article aims at pouring oil in the fire and causing yet more confusion :-).

PDF version of this article.

The group delay of a linear time-invariant (LTI) system, from now on referred to as filter, is defined as the negative of the derivative of the phase response with respect to frequency. In formulas: Let H(j ω) be the frequency response function of the filter,

denote the phase response, then

If the group delay and the magnitude of the filter are reasonably flat around ω, the filter looks approximately like a delay in the neighborhood of ω, so the pulse shape (envelope) won't be influenced much. In that case we expect the output signal y(t) to approximately be

If you think you are confused, read how the experts bash in their heads about the physical meaning of group delay in this rather lengthy newsgroup discussion. A further source of puzzlement is the fact that some filters have bands of negative group delay. If we insist on the idea that the group delay is a measure of, well, delay, then negative group delay would imply that a signal can exit an electronic circuit before it enters it. Hmm. Let's take a closer look.

Example of a Filter with Negative Group Delay

In reference [1] a simple active filter is analyzed by the authors. Its circuit diagram is shown in Fig. 1.

Fig. 1. Circuit diagram of the active filter at the heart of the
electronic negative group delay experiment described in [1].

If we plug in the values R=3 kΩ, L= 100 H, C= 0.098 μF and R'= 30 kΩ, we see that the circuit behaves like a high-Q peaking filter with a resonance at fr = 1/(2 π) sqrt(1/LC - (R/2L)^2) ≈ 51 Hz (blue curve in Fig.2 shows the frequency response of H(j ω)). Any electronics practitioner will readily testify that the circuit from Fig. 1 is causal, meaning that the output cannot anticipate the input. Other people compute the impulse response and note that the impulse response is zero for t < 0.

We will now proceed to find a discrete filter with comparable characteristics in order to be able to reproduce the experiment in Matlab world. To discretize this filter we use Greg Berchin's FDLS method [3], which is available as a Matlab script. Using a logarithmic spaced frequency vector sampling 400 points of H(j ω) from 1 up to 1000 Hz and a sampling rate of Fs = 4kHz, we get the following biquad section:

The approximation is not perfect (the red curve in Fig. 2 depicts the frequency response of the discrete filter), but will serve for this little experiment. 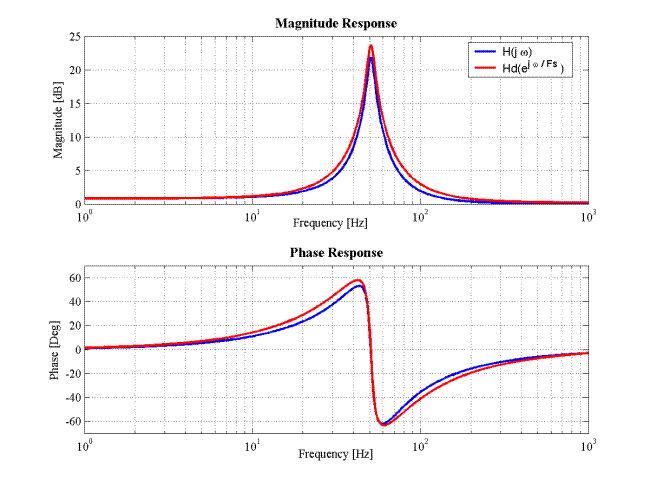 Fig. 2. Bode plot (blue: analog filter depicted in Fig. 1, red: discrete approximation (2)). The discretized filter Hd(z) has slightly wider bandwidth than its analog counterpart H(j w), but else captures the characteristics of the analog filter. Both filters have minimum-phase responses, implying that there are stable and causal inverses.

Fig. 3. The group delay for both the analog and the discrete system is negative except in a small band around the resonance frequency. As a beneficial but unintentional discretization side-effect, the discretized filter Hd(z) has about 1ms less group delay than the analog filter H(j ω) for low frequencies.

The original experimenters cascaded the circuit shown in Fig. 1 four fold to produce an extremely resonant filter with around 90dB of gain in the resonance region. The test signal p(t) is a modulated Gaussian pulse centered at t = 0 with a width of σ seconds,

resulting in the output signal y1(t). 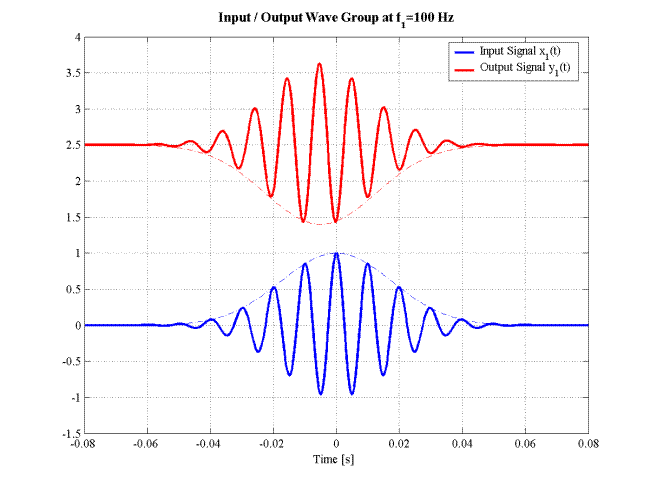 Looking at Fig. 4 we see that the heuristic (1) to predict the response of a filter to a wave group (carrier modulated pulse) is quite good. The group delay at f1 = 100 Hz of the filter is -1.2ms which results in a total of -5ms delay after four runs through the filter, and the amplitudes of input signal and output signal scaled by |Hd(j 2 π f1)|-4 match up to an error of about 10%.

At low frequencies the negative delay effect should be even more pronounced, because according to Fig. 3 the group delay at low frequencies is about -4ms, so we expect the cascade of four filters to have a combined group delay of about -16ms. To test this we modulate the Gaussian pulse p(t) by a sinusoid at frequency f2 = 1 Hz, creating the input signal

and the corresponding output y2(t), seen in Fig. 5. 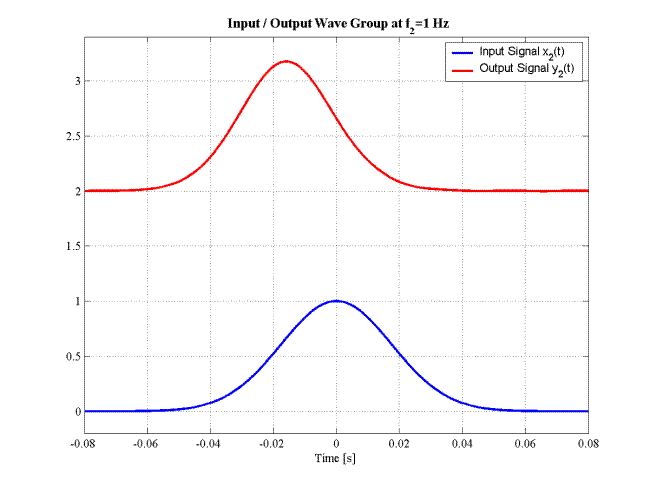 Fig. 5. Input x2(t) and output signal y2(t) at f2 = 1 Hz carrier frequency. The output is scaled by the gain of the filter at f2 and offset by 2.5. Again, the output precedes the input by the group delay at the carrier frequency, which is 16ms. This nice example shows that measuring the speed of propagation of wave packets by measuring the time difference between the peaks may be misleading.

Inspecting the frequency response in Fig. 2. once more, we note that the magnitude response of the filter is more or less flat from 0 - 10 Hz, whereas the phase response "leads" (is positive). The group delay (Fig. 3.) shows that the phase lead has a constant slope. Thus in the band from 0 - 10 Hz the circuit has (almost) the same frequency response as the corresponding acausal time advance of 4ms. Physicists like to experiment with pulses, but in DSP we like stochastic signals. So in addition to the experiments with the pulses conducted in [1] and repeated above, we check the response for a random bandlimited signal to test if the circuit behaves like a time advance for more complex signals as well as for pulses. The test signal will be

where hLP(t) is the impulse response of a 10Hz lowpass filter (remember the sampling frequency Fs = 4kHz), * denotes convolution and u(t) is a sequence of independent standard normal random numbers. This test signal and the corresponding filter response are shown in Fig. 6. The uncanny result is that even for random signals, the filter time advances the input by the group delay, verifying the result of the pulse experiments.

Fig. 6. The response y4(t) to a bandlimited random signal x4(t) is even more baffling. The filter predicts the input 16ms into the future (and doesn't make much error doing so). Note the different time scale as compared to the other figures. The signal x4(t) is generated by sinc-interpolation (upsampling) of a white noise signal.

All of these experiments lead us to doubt the causality of the filter, even though the impulse response clearly satisfies the conditions for a causal filter (being zero for negative time). So in the final experiment we aim to "trick" the filter. We repeat the experiment depicted in Fig. 5, however, this time the pulse p(t) will be truncated at t=0 (see Fig. 7). 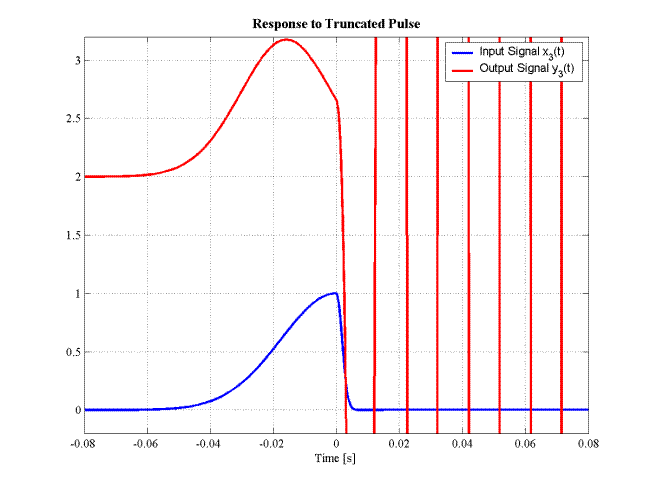 After these enlightening experiments, what can we conclude about causal negative group delay systems?

So what exactly is the physical meaning of negative group delay? For positive delays, the meaning seems clear and can readily be expressed through (1). The envelope of the carrier signal is delayed by the group delay. However, negative group delays do not imply time advance (at least not in causal systems). Rather, for signals in the band where the group delay is negative the filter tries to predict the input. If the signal is predictable from past values (as for the modulated Gaussian pulse and the bandlimited random signal, Figs. 4,5,6), then this brings about the illusion of a time advance. The illusion breaks down when the signal contains an unpredictable event (the truncation of the Gaussian pulse, Fig. 7).

But what signals are predictable? In the above example, the illusion of time advance only works if the signal is limited to the band where the group delay is negative (and the amplitude response is relatively flat). It is well known that bandlimited signals are redundant. Discrete oversampled signals carry more samples than are necessary to describe them. It can be shown (see for example [4]) that signals oversampled by a factor of 2 (or more) can be fully reconstructed from just the past samples up to time t=0 by using a linear prediction filter. And exactly this is occurring here: the test signals are contained in narrow bands and therefore highly redundant. The filter uses this redundancy to predict the signal  (linear prediction filter). In the continuous-time domain, the situation is even more dramatic: a bandlimited signal can theoretically be reconstructed from just knowing its value over a small stretch of time (this is called analytic continuation). Thus knowledge of the past is sufficient to predict the future (remember, theoretically).

Hi Andor, Thanks for the interesting, and "eye-opening", blog. You have forced us to think more deeply about what is the true meaning of negative group delay. [-Rick Lyons-]
[ - ]
Comment by westocl●March 9, 2008

I took alot of heat for 'phase cloning' but your paper indeed describes exactly what I am doing. Thought about a different way, one can decouple magnitude from phase because you found a way to relax causality.
[ - ]
Comment by stephaneb●March 7, 2008

Great work- most interesting and well explained paper I have seen in a long time.
[ - ]
Comment by michaelthompson●June 14, 2010

Andor Bariska works as researcher, project manager and consultant on Technical Systems and Signal Processing at the Institute of Data Analysis and Process Design of the Zurich University of Applied Sciences. He is experienced in algorithm development for signal processing systems and successfully completing advanced software and research projects.