A New Contender in the Digital Differentiator Race

This blog proposes a novel differentiator worth your consideration. Although simple, the differentiator provides a fairly wide 'frequency range of linear operation' and can be implemented, if need be, without performing numerical multiplications.

In reference [1] I presented a computationally-efficient tapped-delay line digital differentiator whose $h_{ref}(k)$ impulse response is:

and whose $ \lvert H_{ref}(\omega) \rvert $ frequency magnitude response is shown by the blue dashed curve in Figure 1. 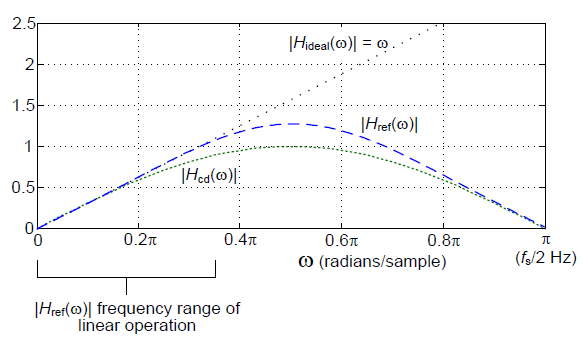 The response curves in Figure 1 are what I call "normalized" magnitude responses. I'll define what I mean by normalized later in this blog.

(As a bit of trivia, it's interesting to note that the central-difference differentiator's magnitude response is equal to the first half cycle of a sine wave. I prove that fact in Appendix A.)

The improved differentiator I propose here has the impulse response given by:

and whose $ \lvert H_{pro}(\omega) \rvert $ frequency magnitude response is shown by the black solid curve in Figure 2.

Figure 2 shows the benefit of the proposed $ h_{pro}(k) $ differentiator. Its $ \lvert H_{pro}(\omega) \rvert $ response has an increased-width (by roughly 33%) 'frequency range of linear operation' compared to the $ \lvert H_{ref}(\omega) \rvert $ frequency magnitude response. Based on Figure 2, the $ h_{pro}(k) $ differentiator should be useful in applications where the spectral components of the input signal are less than $ \pi/2 $ radians/sample $ (f_s/4 \ Hz.) $

The $ h_{pro}(k) $ differentiator has, due to its antisymmetrical coefficients, linear phase in the frequency domain. In addition, the differentiator's input/output time delay (group delay) is exactly two sample periods. Having a delay that's an integer number of samples makes this differentiator useful when its output must be synchronized with other time-domain sequences, such as in FM demodulation applications. 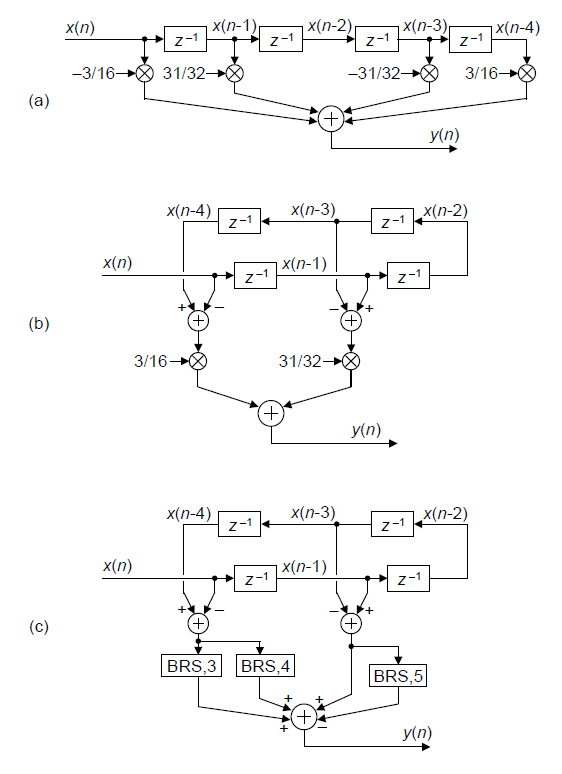 For completeness I mention that the $ h_{ref}(k) $ and $ h_{pro}(k) $ differentiators have magnitude response gains greater than unity. This is shown by the actual frequency magnitude responses shown in Figure 4.

Often in the DSP literature, for convenience, the time between $ x(n) $ samples is assumed to be unity, i.e. $ t_s = 1 $ and a central-difference differentiator's difference equation takes the popular form of:

For example, let's say the continuous red-dotted curve in Figure 5 is the $ x(t) $ instantaneous water pressure inside a water pipe measured in pounds per square inch (psi). And we have three $ x(n) $ samples of $ x(t) $ shown by the large $ x(n) $ black dots. The $ t_s $ time between sample is 0.5 seconds.

However, time rate of pressure change values must dimensionally be psi/second.

What we should do is use Eq. (4) giving us a dimensionally-correct time rate of pressure change value of:

Result $ y(5) $ tells us the water pressure increased by 5 psi during the one-second time interval from 1.5 seconds to 2.5 seconds. So my point is, Eq. (5)'s $ y'(n) $ is the popular form of a central-difference differentiator's difference equation, but Eq. (4)'s $ y(n) $ expression is the dimensionally-correct form.

Replacing $ z $ with $ e^{j\omega} $ gives us the differentiator's frequency response of:

Therefore the $ \lvert H_{cd}(\omega) \rvert $ frequency magnitude response is equal to the magnitude of a sine wave as:

Hello mhilgenforf,
perhaps you didn't take into account the 'normalization' that I described in my blog. Try the following MATLAB code and if you're still having problems please let me know.
[-Rick-]

Excuse my ignorance, but if you take the coefficients you give in the signal flow diagram (a) and plug them into MATLAB the computed frequency response is very different from that shown in Fig. 2.
[ - ]
Comment by DanBoschen●June 15, 2022

Phase is often overlooked but can be an important consideration; I was particularly curious how a Tustin (Bilinear Transform) mapped differentiator would compare in the pile of options since that would provide an exact phase match over all frequencies (and distorts the amplitude due to the "frequency compression" property of that mapping technique). A Tustin mapped differentiator would be implemented as:

Because the discrete differentiators I've described in my blogs all have linear phase I didn't discuss their phase responses to any meaningful degree.

When I model your above H(z) = (z-1)/(z+1) transfer function it behaves like a resonator rather than a discrete differentiator. I must be missing something here.