I mean, can the high level symbol have a higher output after the matched filter even if it is not matched vs. a lower level symbol that is matched?

Westrace, perhaps I am guilty of requiring you to be too precise, but usually the matched filter is used to identify a signal buried in noise. Unless the noise is guaranteed to be sufficiently weaker than the signal, there is no possible guarantee that a matched filter for signal 1 will have a higher output, when signal 1 is transmitted, than the matched filter for, say, signal 2. It has to be a probabilistic comparison.

My question was more in theory, even in the absent of noise added.

For example if I have two symbols:

symbol one has an amplitude of A so its matched filter is : A s1(Ts-t)

In a QAM16 or QAM32 …,  where each symbol will have different amplitude, is it true that, when a given symbol is transmitted, only the matched filter for that symbol will have the highest output?

With QAM type signals there is another issue. Several transmitted signals are sent at the same time, but time shifted, e.g. one "chip" can be sent in 0 to T   and another can be sent in T/2 to 3T/2.  Then the received constellation is not a set of say 16 points but rather is an "eye diagram".

Every symbol has same shape in principle no matter what level it has in IQ map. If a symbol in 16QAM is lower than another by design then you want to keep it like that.

I am familiar with one filter for the stream of symbols.

I am not sure what is that bank of correlators for. But my guess is that if you view each sequence of symbols as a unique shape then we might have different correlators e.g for 16QAM we have 4 levels on I or Q and that means a variety of sequences. But such approach seems unrealistic since one filter is well known to work.

The easiest example is a BPSK or QPSK receiver, where the coordinate axes are halfway between the constellation points, so if the received signal level is above or below the axis the hard decision level is either a 1 or 0.

Likewise for multi-level constellations like 16-QAM, a decision line is drawn halfway between the constellation points that determines which point the signal will be decoded as.

So, only one matched filter, and take the constellation point closest to the received signal level as the most likely point transmitted. 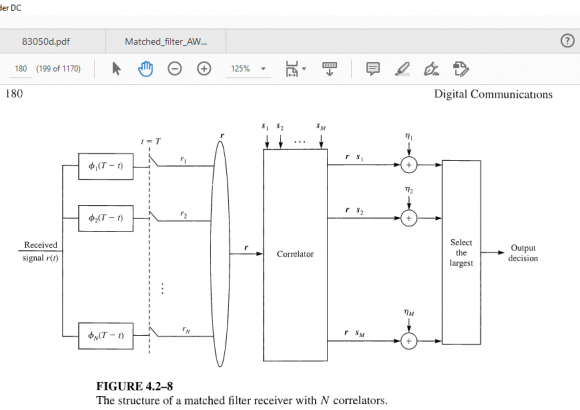 I also notice that some other literatures have only one matched filter, one for the inphase and one for the quadrature.  So I am a bit confused as to which one is being used.

Here is one example in which only one matched filter is used. 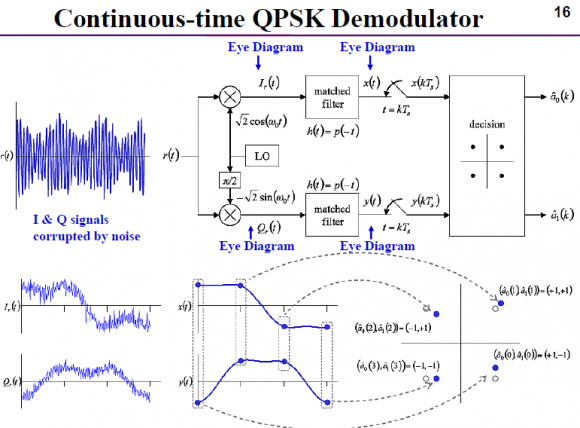 I think you are misunderstanding the figure in Proakis.   I have the 4th Ed which doesn't have that figure, so can't comment directly on what might be being shown there, but QAM receivers are not built this way.   Proakis shows a a lot of diagrams that are meant for theory, not for implementation, and I suspect that's either what this is, or something else is being shown.   I see that the correlator correlates against M symbols, so it might be a CDMA or spread spectrum receiver or something, I really don't know.

If the channel has no memory then we can do symbol by symbol demodulation.One matched filter which will match to transmitted pulse shape(which is common for all 16 QAM points) will be used.This filter maximises SNR.The filter output will be given to nearest neighbour detecor where 16 points of the QAM constellation contend.Winner will be the one which is least Euclidien distance to matched filter output.

If the channel has memory then IntersSymbol Interference (ISI) will be there.We can not detect symbol by symbol.We have to consider the entire sequence and use Vitebi or ML detector.