I had quite a few questions I was hoping someone could answer regarding the use of FFT's when convolving a digital signal:

1. When convolving some digital signal A by some impulse response B, do we get the same convolved digital signal, whether we use an FFT or not?

Assuming the digital signal is made up of fewer frequencies than samples, using an FFT to perform some DSP operation will be far more efficient than when not using an FFT.

Is my understanding of an FFT correct?

3. Regarding parallelization, once a digital signal has been converted into an FFT, is it safe to assume that some DSP operation performed on each frequency (for example, convolution) can be performed in parallel?

Is it safe to assume that if I wished to convolve the C major chord by my impulse response B, that I could split my computational workload among the following 3 threads:

Or is it instead the case that operations performed on an FFT can only be performed serially (e.g. not in parallel)?

4. Are there situations when using an FFT is not beneficial?

For instance, if some digital signal consists of only 10 samples, but 10 or more frequencies, would:

...be slower than simply performing convolution on each sample?

If so, does this sort of situation tend to happen a lot (with random digital signals), or is it rare?

For example, is performing an operation such as convolution more computationally difficult / intensive when performed on frequency data opposed to sample data?

6. Is there some average / general-case efficiency speedup of using an FFT as opposed to not in the DSP literature?

In other words, are using FFT's to perform some DSP operation considered to be (on average) 50% more efficient than when not using an FFT (or is this primarily dependent on the makeup of the digital signal - e.g. number of samples vs frequencies which make up a particular digital signal)?

7. Would it be possible to create a compression algorithm to compress digital signals into an FFT (which would then be converted back to a digital signal during the decoding phase)?

8. If it's possible to compress / represent a digital signal as an FFT, is the compression / representation lossy or lossless (or is this something that is primarily implementation dependent)?

If this is implementation dependent, is it safe to assume that there will always be some compression advantage to converting a digital signal into an FFT (over using something like variable bit-rate audio compression)?

Or is the compression advantage only worth it, if during the FFT transformation, we omit or drop certain frequency data (for example, dropping frequencies that can't be heard or picked up by most consumer speakers / headphones)? 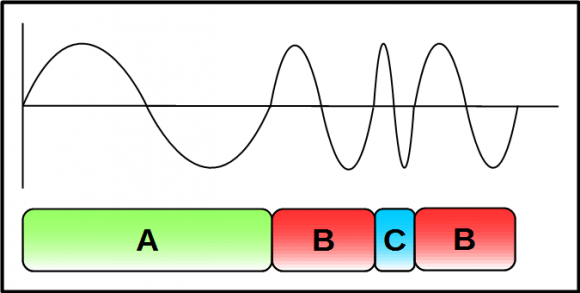 ...be the same size as the following digital signal (consisting for the same 3 frequencies: A, B and C)? 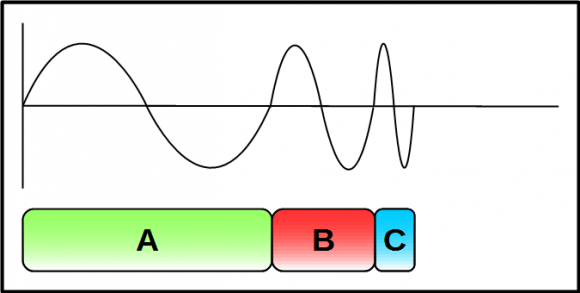 Wow - that's a lot of questions.

I'm not going to try to answer them all - I would suggest you read any of the good DSP text books for that. But I'll try to point you in the right direction.

A "digital signal" can be represented in the time domain or in the frequency domain - this is similar to a vector in three dimensions being represented using different triples of orthogonal basis vectors. The interesting thing is that some operations are more efficient to carry out in the time domain and some in the frequency domain. That is why we need an efficient method of going back and forth between the domains - which is what the FFT gives us.

Filtering entails a convolution in the time domain (which is N multiplies and adds for each sample output, N^2 for N samples) but simple multiplications in the frequency domain (N multiplies for N outputs). In theory if you do an FFT + M multiplications + iFFT you will get the same answer - but don't expect bit-exactness unless you are very careful.

When you say that C4 is 261 Hz you are talking about the fundamental frequency. On any real instrument there will be harmonics (and possibly overtones that are not harmonic - as in string instruments). So there will be many non-zero bins. That is not why you save in computation! There are methods for saving in computation when it is known that there are only a few frequencies (Goertsel, Pisarenko, ...) but FFT is not one of them.

Indeed there are plenty of situations when converting to the frequency domain is not a good idea. For example - a simple gain is N multiplies for N samples in either domain - so there is no reason for 2 N log N conversions if you have the signal in the time domain. Similarly, a N^2 convolution in the frequency domain (which can be useful!) is N multiplications in the time domain!

There are indeed cases where specification in the frequency domain involves fewer bits than in the time domain, and vice versa. And there are other transforms that may be even better for specific signals. The minimum involves something called the KLT.

As I said - you asked a lot and it would require a large part of a textbook or a basic course on signals and systems to answer all of your questions.

as an example of fft based convolution targeting equivalent sample values(bit-true) here is what I will do. There is some rounding issue but you can remove it.

You are correct that I did ask a lot of question, but I was hoping I could use an FFT as an optimization to an algorithm I was working on.

"In theory if you do an FFT + M multiplications + iFFT you will get the same answer - but don't expect bit-exactness unless you are very careful."

"There are methods for saving in computation when it is known that there are only a few frequencies (Goertsel, Pisarenko, ...) but FFT is not one of them."

...lead me to believe that an FFT won't be of any real help to my algorithm.

Thank you very much for the detailed response, as it helped steer me away from going down a development path which would be of little benefit.