I have some troubles understanding the comb filter. Hope someone can help.

I am going to use the following figure to illustrate my questions: 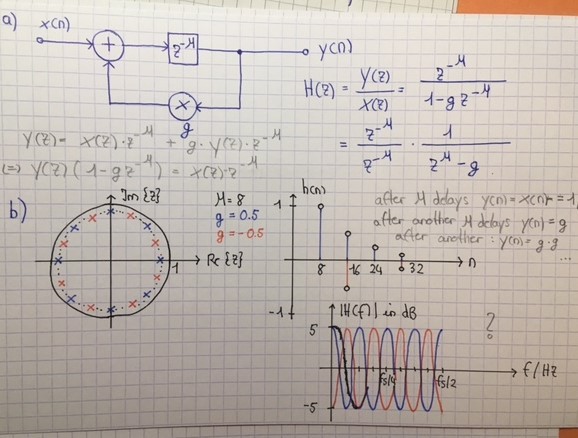 You can see the block diagram of an M-fold comb filter with feedback loop. Let's have a look at the pole-zero plot: Poles should be wherever the denominator of the transfer function becomes zero. That is whenever z^M = g. For the given example this happens at z = g^(1/M) = 0.5^(1/8) = 0.917. Of course we will have M poles and therefore can just equally space these on a circle with radius 0.917.

Now, how do we plot the impulse response? We simply have a look at the block diagram and send in a dirac, or better say a unit pulse. The 1 occurs at the output after M=8 delays. Since we do not insert another input, the output will be fed back after 8 delay steps, but it is multiplied by g. So at n=16 the output equals 0.5 ...

Can somebody explain this to me, please?

You may want to start with this here on the site:

I am a bit confused. Is this comb or Integrator. How come you add such long delay to feedback and why. also you rightly say about impulse input but then move to describe sine waves.

You need to explain your questions better so you get answers

It looks like you have already computed the transfer function H(z) in z-domain. To compute the frequency response, you can simply set z = e^{jw) and compute H(e^jw). This will be a complex function of w, from which you can compute the magnitude and phase response. Also, w = 2 pi f, so you can interpret the frequency response defined over 0 <= w <= pi, or equivalently 0 <= f < = 1. Keep in mind that this is the normalized frequency, i.e. the actual frequency range [0, fs/2] has been mapped to the normalized frequency range [0, 1].

The network's gain at zero Hz (DC) is 2. The bottom of the valleys in the freq magnitude response are 0.666, which is roughly -9.5 dB below the peaks.

There is a figure on wikipedia: Comb Filter Frequency Response

Also, I would rather have this in dB on the vertical axis and f in Hz on the horizontal axis

Hi Luk_11. Your confusion is NOT your fault.

The freq axis in the wikipedia spectral plot is incorrect. (Although I avoid such vulgarity, today's young people would say, "WTF!")

allright, thank you so much, Rick!

I can propose another way to understand how to build the spectrum of a comb filter, either recursive or not, and also its impulse response.

First of all, you need to study the spectrum of cases with a unit delay and determine the nature of the related filter.

For the recursive filter, we can just study the filter :

where a is a real within ]-1, 1[ to consider only the stable cases.

With the z-transform we have :

so the transfer function is

which can also be rewritten:

Considering the restriction to the Fourier digital domain, that is to say the unit circle defined by z-> e^(2 pi j nu) with nu the reduced frequency given by nu = f / Fs, we have the following expression for the gain:

Introducing the relation between complex numbers and mathematical affixes, we can consider the origin point of the z-plane O(0), the pole point P(a) and a moving point over the unit circle M(e^(2 pi j nu)).

So, we can interpret |H[nu]| as the ratio of distances OM and PM.

As the Discrete Time Fourier Transform (DTFT) satisfies the hermitian symmetry, |H[nu]| is an odd function.

As the DTFT is periodic with a unit period in nu, |H[nu]| completed by parity within the [-.5, .5] interval is periodic over R.

We still have 1-periodicity and the gain parity (due to hermitian symmetry) so |H[nu]| completed by parity within the [-.5, .5] interval is again periodic over R.

One may follow the same process but with a new difference equation:

It is also necessary to distinguish the positive and negative cases for b and using the link between complex numbers and z-plane points makes the study rather easy.

I will only describe the case of the recursive comb filter for 0<a<1 but the principle is the same in all cases.

When we change the value of the delay from 1 to D_0 (with D_0 an integer greater than 1), each "echo" generated by the retroaction (multiplied by a) is delayed.

In fact, when performing the frequency compression of factor 2, we take into account the next semi-period of unit-delay spectrum.

In fact, when performing the frequency compression of factor 3, we finally have 3 semi-period of the 1-delay spectrum within [0, 0.5].

In fact, each time we increase the D_0 delay with 1, we also increase the number of semi-periods of the 1-delay spectrum taken into account within [0, 0.5] to build the D_0-delay comb filter spectrum.

We are then able to access, for instance, to the spectrum give by Rick Lyons

It is the simplest method I have found to explain the comb filtering principle to my students.

I hope it may help.