Analog to digital converters (ADC’s) have several imperfections that affect communications signals, including thermal noise, differential nonlinearity, and sample clock jitter [1, 2].  As shown in Figure 1, the ADC has a sample/hold function that is clocked by a sample clock.  Jitter on the sample clock causes the sampling instants to vary from the ideal sample time.  This transfers the jitter from the sample clock to the input signal.

In this article, I present a Matlab ADC jitter model.  The model’s inputs are an arbitrary ADC input signal vector and a time-jitter vector.  The input signal can be a sine, multiple sines or anything you want to try.  The time jitter can be sine, Gaussian, filtered-Gaussian, etc.  The model is useful in giving a sense of how input signals and their spectra are affected by jitter, which we’ll see in some examples.

Random jitter, or phase noise, is inherent in any oscillator.  In the frequency domain, it appears as a spreading of the carrier energy that is referred to as sidebands, but these sidebands are not discrete.  Deterministic jitter is caused by real-world implementations where, for example, unwanted clock signals may be coupled to power or ground traces of the sample clock oscillator, causing discrete phase sidebands.   Since the discrete jitter case is simplest, we’ll begin with it here in Part 1.  Then we’ll cover random jitter in Part 2.

This article is available in PDF format for easy printing.

The Matlab function adc_jitter is listed in the appendix.  Before describing how the function works, we’ll use it to perform a simulation using a sine input and sinusoidal jitter on the sample clock.

Next, define the analog input sinewave x and the jitter sinewave dt.  The units of the jitter amplitude is seconds.  We compute the jitter in samples = dt/Ts, then call the Matlab function adc_jitter.  Finally, we quantize the output to 10 bits.

The output y is at the fs_adc sample rate of 100 MHz.  An eye diagram superimposing all cycles of the ADC output sinewave is plotted in Figure 2.  The jitter is just visible.  A zoomed version is shown in Figure 3.  The jitter is equal to that of the sample clock, i.e. 200 ps peak or 400 ps peak-to-peak.

The spectra of the ADC input and output are shown in Figure 4.  The input spectrum is a pure tone.  The output spectrum has sidebands due to sample clock jitter at fm= 1.9 MHz.  You can also see the quantization noise floor at the bottom edge of the plot.

How the Model Works

The Matlab function adc_jitter(x,dsample) is shown in the appendix.  The function’s inputs are the ADC analog input x(n) and the sample clock jitter in samples, dsample(n).

In Example 1, we assumed a time jitter waveform dt(n) that was a sinusoid with frequency fm and amplitude A seconds.  For every sample n, we had dt(n) = A*cos(2πfm*nTs).  We then computed jitter in samples as dsample(n) = dt(n)/Ts.

Thus, for every ADC sample x(n), the sampling instant was offset by dt(n).  As shown in Figure 5 for a single sample, this time offset means that the sampled analog voltage is offset from the ideal value.  The model needs to estimate this voltage, shown as the red asterisk.  It does so by interpolating between samples of the input voltage. We need to use a variable interpolator because each value of dt(n) is unique; i.e., the interpolation index dt(n)/Ts is not a constant.

Since we are normally interested in small values of dt, we could use a linear interpolator.  However, we can get more accurate results over a wider range of jitter amplitude by using a polynomial (e.g. parabolic or cubic) interpolator [3, 4].  The function adc_jitter uses parabolic interpolation.

A few details:  First, the inputs x and dsample of adc_jitter are sampled at twice the ADC sample rate of fs_adc.  Once the interpolated values are calculated, they are downsampled by two, to fs_adc.  The reason for this is to account for the bandwidth of the interpolator (see appendix).  Input signal frequency components above fs_adc/2 will be aliased.  Second, rather than using interpolation index of dt/Ts, we use dt/Ts + 0.5.  This prevents having a negative interpolation index when dt is negative.  Finally, note that in all of this we did not generate a sample clock; the model doesn’t need a sample clock, just the vector dsample of jitter in samples.

Figure 5.  Effect of jitter on sampling

where ϕ is rms phase relative to carrier phase in radians and SSB power is the power of one sideband.  We can rewrite the above as:

where PSSB is the power of one sideband in dB relative to the carrier power (dBc).  We have assumed the level of higher-order phase sidebands is negligible.  Taking the square-root,

Phase jitter in radians and clock jitter in seconds are simply related by:

where Δtrms is the rms clock jitter in seconds, T0 is carrier period, and f0 is carrier frequency.  For an ADC, the jitter Δtrms in Equation 2 is a constant vs. f0.  Thus for increasing f0, Δtrms becomes a larger and larger fraction of T0, causing ϕ to grow linearly vs. f0.  Substituting for ϕ in equation 1, we have:

Combining this with Equation 2, we then have:

Equation 3 shows that the sideband level due to jitter varies as 20*log10 of the analog input signal’s carrier frequency.  We can illustrate this by letting the input equal the sum of two sinewaves at 10 MHz and 40 MHz.  Then the sideband level should be 20*log10(4) = 12 dB higher at 40 MHz than at 10 MHz.  We use the same code as above, with ADC input x replaced by:

The resulting input and output spectra are shown in Figure 6.  As expected, the sidebands at 40 MHz are about 12 dB higher than those at 10 MHz.  The second-order phase sidebands are also visible.  Note that the input signal amplitude is about +/-2 Vpp, so quantization level is effectively 11 bits.

In this example, we’ll phase-demodulate the ADC output, and compare the demodulated phase jitter to the expected jitter.  We set the input frequency and jitter as follows:

This gives the spectrum of Figure 7.  Now let’s calculate the expected phase jitter of the output.Modifying Equation 2 for peak-to-peak phase jitter, we have:

So we expect ϕpp = 2π*1.2E-9*35E6 = .2639 radians pp or 15.12 degrees pp.  If we phase-demodulate the ADC output and plot Q vs. I, we get the result shown in Figure 8.  As expected, the peak-to-peak phase jitter is about 15 degrees.  It is worth noting that even for the relatively large phase excursion of this example, the model produces almost pure phase modulation on the ADC output.

We can also model a non-sinusoidal input to the ADC.  Figure 9 shows the spectrum of a modulated pulse with approximately rectangular spectrum applied to the ADC, where we have set:

Hi Sir, what do we exactly mean by jitter per sample and what are farrow coefficents?

I compute the jitter in samples as:

So I should have called it "jitter in samples".

Units are s/(s/sample) = samples.  I updated the post to fix this error.

A Farrow interpolator is an efficient structure to implement a parabolic or cubic interpolator.  The coefficients are defined in references 3 and 4.

There is a slight timing snag in jitter function.

This can be seen by plotting jitter noise versus timing jitter:

The jitter noise near dt=0 should be close to zero, but it's not.

This issue may be relevant a time-interleaved ADC behavioral model.

OK, I have a better answer.  The issue you found is due to a delay between the input x and the output y of the function adc_jitter.  A way to get around this problem is to call adc_jitter twice:  The first time, you use the desired jitter; the 2nd time you use a jitter vector that is all zeros.  Then the error due to jitter is the difference of the two outputs, called y and y0:  error = y - y0.

Below are plots of error and dsample vs sample number and error vs. dt.  As desired, error is zero when dsample or dt is zero.

Here is the code.  Note I changed f0 and fm from the values used in the post. 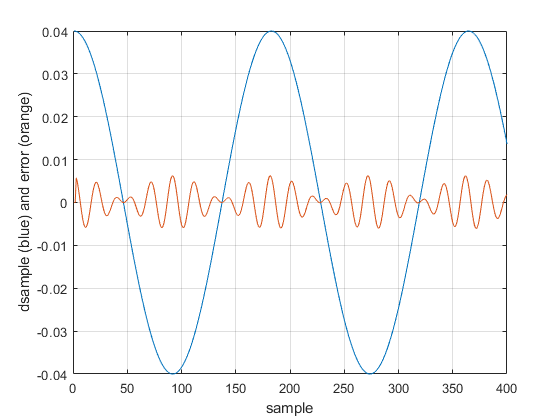 dsample (blue) and error due to jitter (orange) vs. sample number 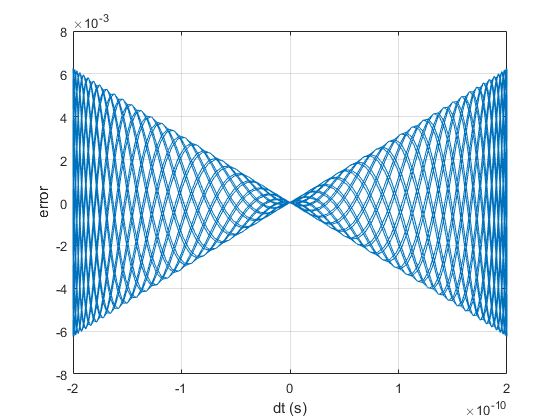 error due to jitter vs jitter dt over all samples

Thank you so much for your quick response.

In your response code, the zero-jitter output y0 is x(1:2:end) delayed for 1.25 samples. In some modeling environments, an extra delay not desired.

Here are my thoughts solving the synchronization issue:

In adc_jitter.m, the data rate of dsample is doubled. If you delay dsample by one would mean 0.5 sample delay of jitter in the output y.

Changing two lines in adc_jitter.m would synchronize x(1:2:end) and y:

Also, for either case, the frequency response of the interpolator is no longer lowpass, but has a slight peaking for f > fs/4.

I have not looked at this closely, so there could be some unforseen problem with using mu= dsample or mu= 1+ dsample.

Indeed, I've suspected that such filtering may distort data slightly.

In the function, the fractional delay can't be negative, but this can be circumvented.

What about DAC jitter ? is it similar to ADC jitter?

I have built a model for the ADC jitter, do you think I can use it as DAC jitter?

thanks for your support

I think you can use the same model for a signal source that uses a DAC.  However, there is probably a more direct way to model source jitter. For example, if your source includes an NCO, you could add a phase signal to the NCO's accumulator.  For sinusoidal jitter of frequency f0, the phase signal would be

Thanks for your fast response, I appreciate it.

You can view the DAC as two cascaded parts:  a "jitter source" followed by a zero-order hold.  You can't exactly model the zero-order hold.  One way to model it would be to filter the signal with an FIR filter having a sin(pi*f*Ts)/(pi*f*Ts) response up to the highest frequency of interest.

The jitter source model cannot actually change the sample positions; it rather interpolates between the fixed sample instants using a jittered interpolation index.

On the other hand, it might be easier to introduce the jitter where the signal is generated.  For example, if the signal generation involves an NCO, the jitter can be added there, as I already mentioned.

Thanks, I will give it a try.

What is the name of this filter? I believe it has a rectangular impulse response and sinc magnitude response.

Thanks for your support, actually most of the time, we model the DAC as a quantization only, we ignore this filtering because of the discrete nature of matlab. In order to model this zero order hold operation, we must use two or more discrete values for one time domain sample. for example, if the input signal is:

the output of the DAC (ignoring quantization, and considering zero order hold):

funny solution ! because further matlab processing would be very complicated espically if OFDM is used

The model assumes a perfect impulse train with added jitter as the sample clock.  So no, it does not simulate sample clock slew rate.