Cascade-Integrator-Comb (CIC) filters are efficient fixed-point interpolators or decimators.  For these filters, all coefficients are equal to 1, and there are no multipliers.  They are typically used when a large change in sample rate is needed.  This article provides two very simple Matlab functions that can be used to compute the spectral images of CIC interpolators and the aliases of CIC decimators.

Figure 1 shows three interpolate-by-M filters (M is an integer) that all have the same impulse response [1,2].  Figure 1a performs upsampling by M, followed by two M-tap boxcar filters.  Figure 1b replaces each boxcar filter with an equivalent implementation consisting of a comb and integrator.  The comb sections each have a delay of M samples.  Finally, Figure 1c groups combs together and integrators together, with the upsampling function between them.  The combs now operate at the lower input sample rate, and the comb delay is one sample instead of M samples.  This Hogenauer filter [3] is the most efficient way to implement a CIC filter.

The frequency response of a single stage boxcar or CIC interpolator is:

where Ts is the interpolator’s output sample time.  For an N-stage filter, the frequency response is:

The magnitude response has nulls at multiples of the input sample rate.

Equation 1 is called the Dirichlet, or aliased sinc, function.  One shouldn’t confuse it with the spectrum of a continuous time pulse of length T, which is $X(f)=sin(\pi fT)/(\pi fT)$.  X(f) lacks the sine in the denominator. 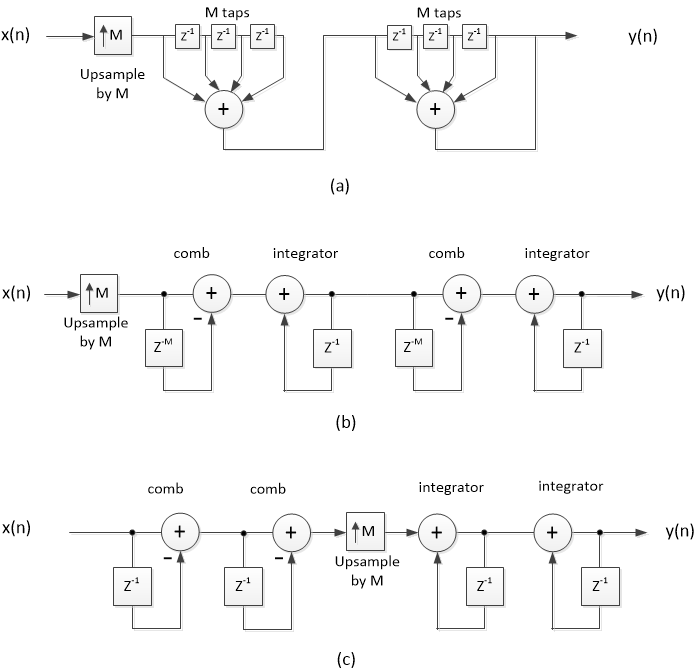 Since Figure 1a has the same impulse response as the CIC interpolators, we can use it to model them.  We’ll compute an N-stage impulse response simply by performing repeated convolutions of the boxcar impulse response.  A Matlab function boxcar_interp.m is listed in Appendix A of the PDF version.  Note that the boxcar coefficients are scaled by 1/M in the function.

Here is an example to compute the impulse response and magnitude response of an M= 40 CIC filter with 4 stages:

The magnitude response is plotted in Figure 2 (bottom).  The response has nulls at multiples of fs_in = 100 Hz. 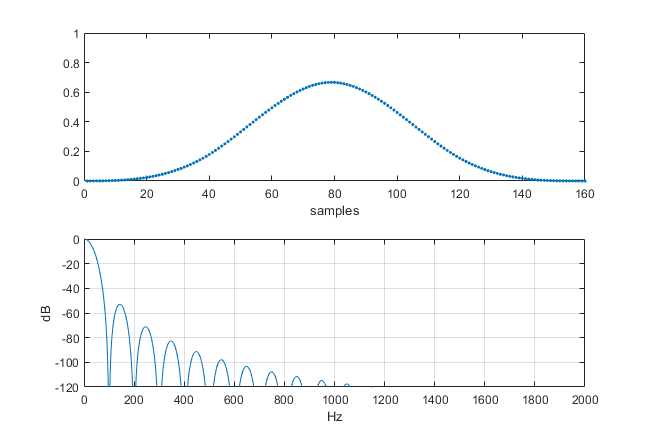 Now let’s look at the impulse response and magnitude response of a CIC interpolator versus the number of stages.  The example is clearer if we keep M fairly low, so we’ll use M = 8.  Here is the code for a single stage CIC interpolator with M = 8:

The impulse response shown in Figure 3a is that of a boxcar filter.  The dB-magnitude response is shown as the top curve in Figure 4, which agrees with Equation 1.  We can repeat the above for a two-stage interpolator, where everything is the same except for the function call and output signal name.  The function call is:

The function convolves two boxcar responses to obtain the triangular impulse response shown in Figure 3b.  Similarly, convolving the triangle response with a boxcar gives the impulse response of a three-stage filter shown in Figures 3c, and one more convolution yields the four-stage impulse response of Figure 3d.  The magnitude responses (calculated by freqz or by Equation 2) of all filters are plotted in Figure 4.  As shown, the stopband lobe levels decrease with increasing number of stages, while the bandwidths of the stopbands centered at multiples of the input sample rate (fs/M) increase.  Note, however, that the 3-dB passband bandwidth decreases vs. number of stages. 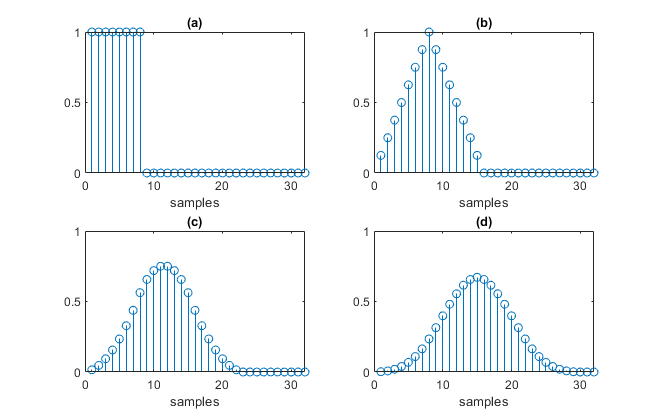 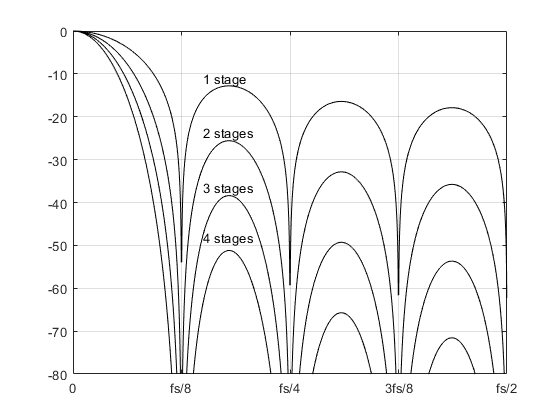 Given an input time sequence, it’s easy to compute the interpolator’s output signal and spectrum, including images.  Here’s an example that computes the output of a three-stage, M = 8 interpolator having multiple sine inputs sampled at 100 Hz.  The following code generates the sines, performs the interpolation, and computes the spectrum of the output signal.  The function psd_simple.m, which I described in a post [4], is listed in Appendix B of the PDF version. 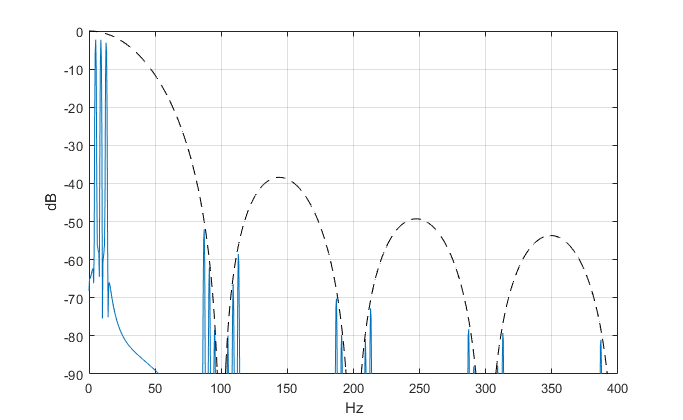 Figure 6 shows equivalent implementations of two-stage decimate-by-M filters [1,2].  Figures 6a and 6b are like the interpolators in Figures 1a and 1b, except the upsampler at the input has been replaced by a downsampler at the output.  Figure 6c groups the integrators on the input side and the combs on the lower-rate output side, with a downsampler between them.  The comb delay is one sample instead of M samples.  The integrators must be implemented using two’s-complement arithmetic such that they roll over when the signal amplitude exceeds the number of bits in the adder [1,2,3].

For a given value of M and a given number of stages, a decimator has the same frequency response as an interpolator, when evaluated relative to the decimator's input sample rate.  This is apparent from comparing Figure 1a for an interpolator to Figure 6a for a decimator. 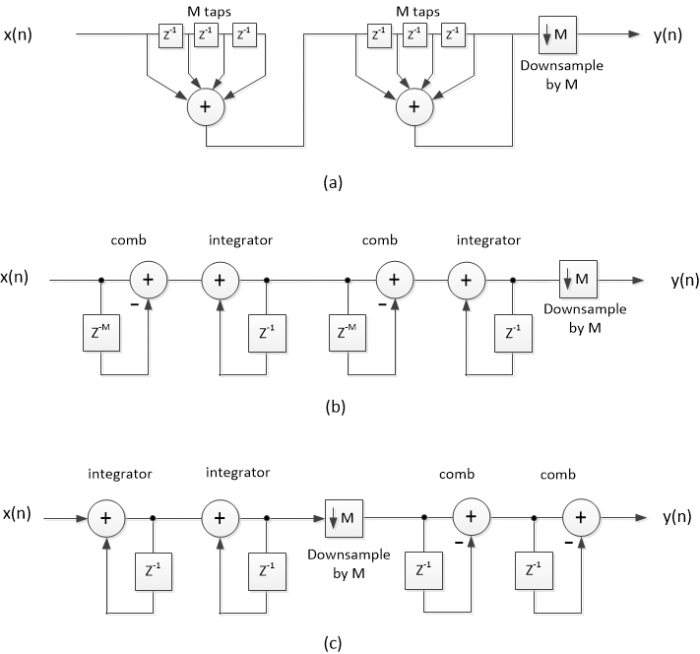 To find the time response of a CIC decimator, we’ll use the equivalent cascaded-boxcar decimator of Figure 6a.  The N-stage impulse response (before downsampling) is computed by performing repeated convolutions of the boxcar impulse response.  The function boxcar_dec.m is listed in Appendix A of the PDF version.

Here’s an example using the same parameters -- M = 8 and Nstages = 3 -- used in section 2 for an interpolator.  The input signal consists of four unwanted sines at different frequencies, sampled at 800 Hz.  The following code generates the sines, performs decimation, and computes the spectra of the input and output signals.  The function psd_simple.m is listed in Appendix B of the PDF version.

Note that the decimator output y has 515 samples, enough to provide adequate resolution in the spectrum.  To get the 515 samples, we needed the input x to have 4096 samples (roughly M times the length of y).

The function boxcar_dec.m can also be used to compute aliases due to modulated input signals; an example using the same decimator as above is shown in Figure 8.  Again, to avoid hiding the aliases, there is no desired input signal, just the unwanted signals. 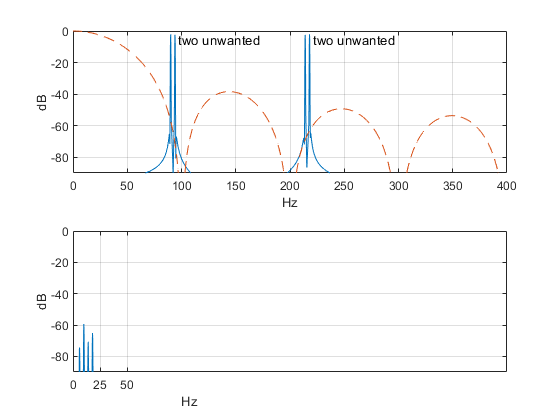 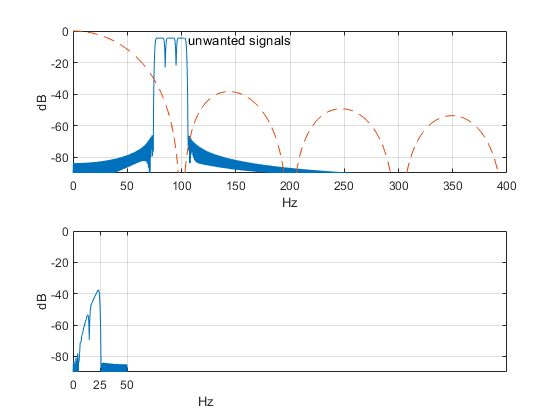 See PDF version for Appendix A and Appendix B.

Hi Neil. This is an informative blog. I liked how your examples showed the specific aliasing, in your Figure 7 and 8, that takes place with decimation.

I'm glad you liked it.  I have a friend that called it "crude, but effective".