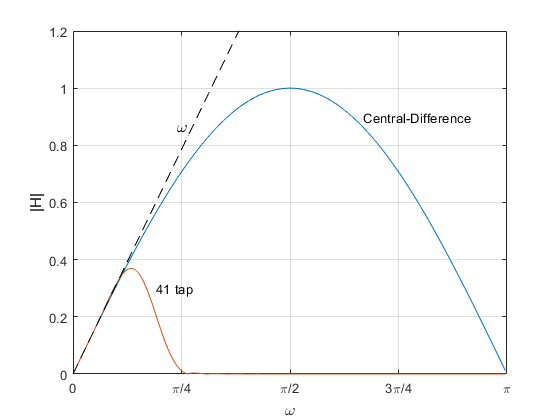 Figure 1.  Magnitude responses of a central-difference differentiator and a 41-tap 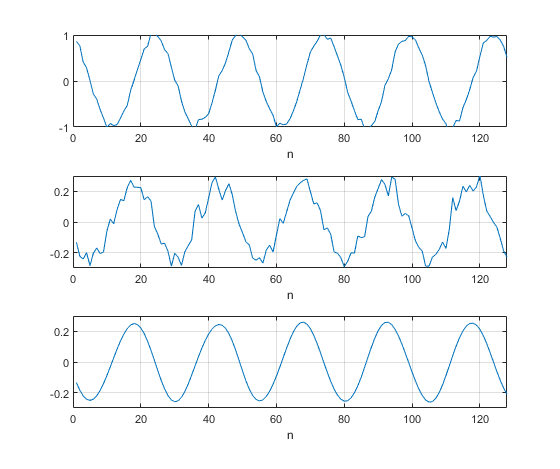 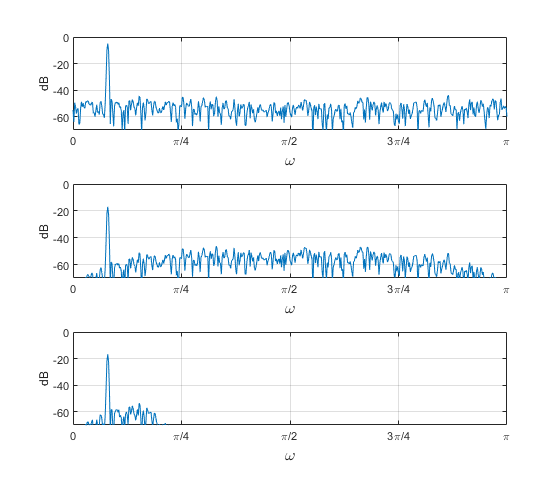 For continuous-time signals, the differentiation property of the Continuous Fourier Transform is:

where Ω is continuous radian frequency.  There is no differentiation property of the Discrete Fourier Transform (DFT).  But given discrete signal x(n), it appears from Equation 1 that the DFT of its derivative should be jω X(ω), where ω= 2πf/fs is discrete radian frequency, and fs is the sample rate.

It turns out we can use a Finite Impulse Response (FIR) filter with real coefficients b(n) as an approximate differentiator:

where $\circledast$ indicates discrete convolution, and the bi-directional arrow now represents the DFT.  The approximation sign means that the derivative is not exact.  What are the coefficients b(n)?  From Equation 2, we have:

So, b(n) are coefficients whose DFT H(ω) is approximately jω.  Normally, the goal is that H(ω) approximate jω over some bandwidth less than 0 to π (0 to fs/2).  Since jω is pure imaginary, we know from the symmetry properties of the DFT that b(n) must be odd-symmetric.  But odd-symmetric time functions are non-causal, so we typically only require odd symmetry with respect to the center of b(n).

The coefficients and block diagram are shown in Figure 4 a and b.  The z-domain transfer function is:

where the complex exponential term occurs because the center tap is delayed 1 sample from that of an odd-symmetric time function.  If need be, we can avoid this delay as follows.  The coefficients and block diagram of an odd-symmetric version of the differentiator are shown in Figures 4c and 4d.This filter has output y(n) time-aligned with the delayed input x(n-1).  The transfer function with respect to x(n-1) is:

Note that the magnitude of H(ω) is the same for either differentiator:

Recall that our goal is that H(ω) approximate jω, or at least that |H(ω)| approximate ω.  Equation 9 is plotted in Figure 1 as the central-difference response, along with |H| = ω (dashed line).  We see that the response approximates ω for small values of ω: 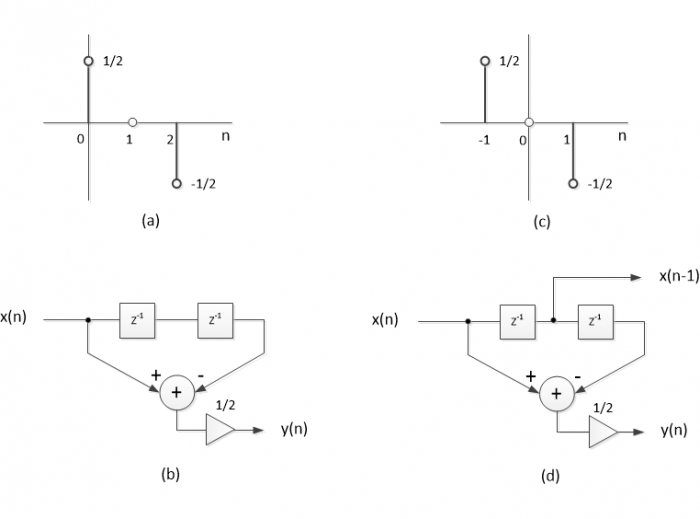 a) Coefficients.   b) Block diagram.

Now we’ll develop our noise performance metric for differentiators.  As an example, we’ll use an FIR differentiator designed using the method described in [1].  I provide a Matlab function diff_synth.m for this purpose in Appendix A of the PDF version.  Suppose we want a differentiator with bandwidth approaching π/2 radians.  The desired magnitude response is shown in Figure 5 (top).  For number of taps = 25, diff_synth.m returns the coefficients shown in the bottom of Figure 5 (We’ll go into more detail about diff_synth.m later in this article).

The magnitude response of this filter is plotted in Figure 6 (top), along with the ideal response.  As you can see, the bandwidth of the filter is less than our original goal.  The response percent error is given by:

The percent error is plotted in Figure 6 (middle).  We can define the useful bandwidth of the filter based on some maximum allowed error.  For this example, if we choose maximum error of 2%, we get a bandwidth of ωmax ~= 0.39π as shown.

Figure 6 (bottom) plots |H(k)|, along with the response of an ideal differentiator with bandwidth ωmax.  The actual response obviously passes more noise power than the ideal response.  I define the quotient of Gaussian noise power passed by these two responses as the Differentiator Noise Power Ratio. 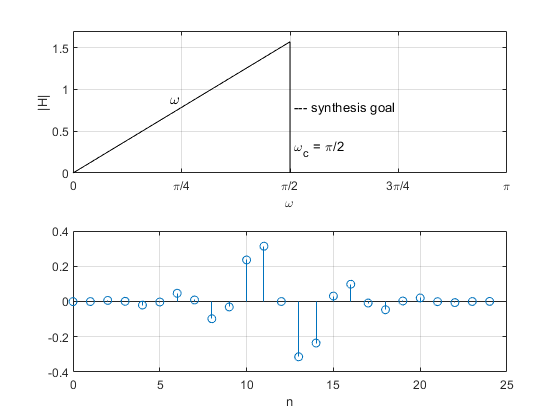 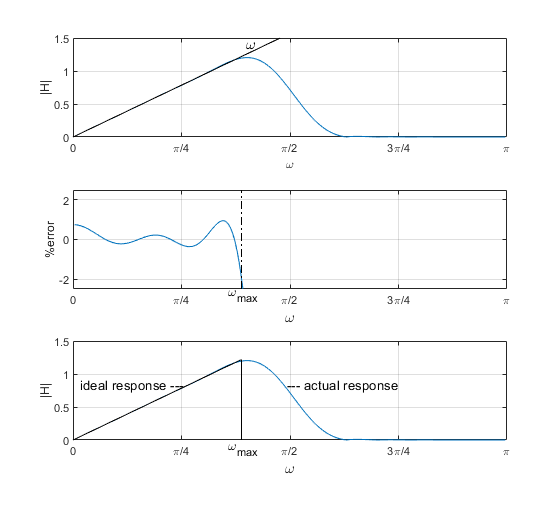 Bottom:  Ideal response over 0 to ωmax and actual response.

At the output of the differentiator, we have:

where M/2 is the number of bins in the one-sided frequency response H(k).  We define the usable bandwidth of the differentiator as ωmax.  If we now consider the ideal differentiator with bandwidth ωmax (see Figure 6, bottom), the average output noise power is just:

where kmax = Mωmax/(2π).  Taking the quotient of equations 13 and 14, we define the Differentiator Noise Power Ratio R as:

For an ideal differentiator, R = 1.  In Appendix B of the PDF version, I derive a simpler expression for R based on ωmax and b(n):

We can state that The Signal to Noise Ratio (SNR) at the output of a given differentiator is reduced from that of an ideal differentiator of equal ωmax by a factor of R.  Equations 15 and 16 require that the passband slope of the differentiator magnitude response be 1.0.  It may sometimes be necessary to scale the coefficients b(n) to achieve this.  Keep in mind that the Differentiator Noise Power Ratio calculation is based on an assumption of Gaussian (white) noise.

What about the case of a differentiator cascaded with an FIR lowpass?  We can just convolve the coefficients of the differentiator with those of the lowpass, and use the resulting coefficients in Equation 16, making sure to include any change to ωmax.

Table 1 lists Differentiator Noise Power Ratio R for several simple differentiators, where R was computed from Equation 16, and ωmax is based on 2% response error.  The magnitude responses of the differentiators are plotted in Figure 8.  Note that you don’t get to choose ωmax:  it is fixed for each differentiator.

Using a different response error criterion would result in different values for R; for example, for a 5% error criterion, the central-difference differentiator would have ωmax = 0.175π and R = 28.3 (14.5 dB).  Also, for a narrowband signal, the differentiator response need only approximate linearity over a narrow frequency range.  In this case, the signal frequency could be yet higher, further improving noise performance. (Note that response slope would be less than 1, which could be compensated with a cascaded gain stage if desired).

Figure 9 plots RdB vs fmax/fs, where fmax/fs = ωmax/(2π).  Given the existence of the ωmax3 term in the denominator of Equation 16, it is not surprising that performance improves with increasing fmax.  Keep in mind though, that if the signal spectrum occupies less than this full bandwidth, you will not obtain the calculated noise performance.  As shown, the central difference differentiator has the worst performance, although we should note that the first difference differentiator would perform poorly vs. high frequency noise or interference, given its high-pass magnitude response. 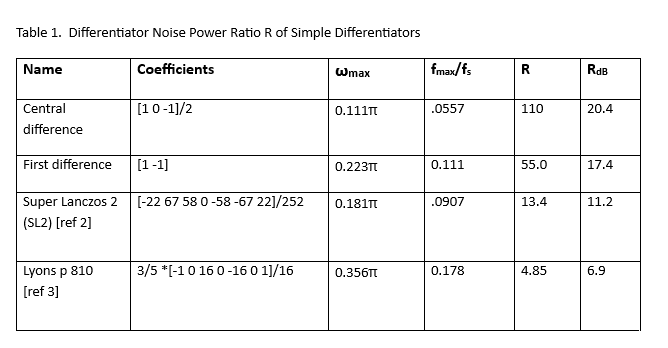 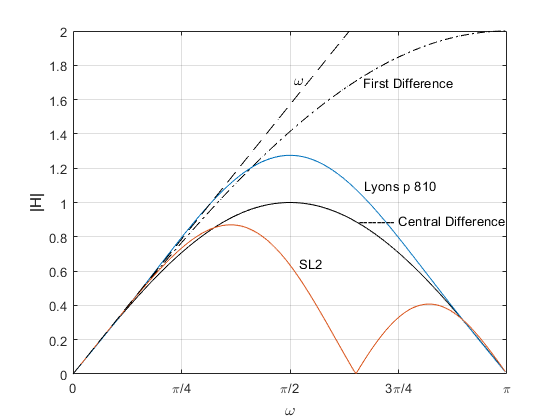 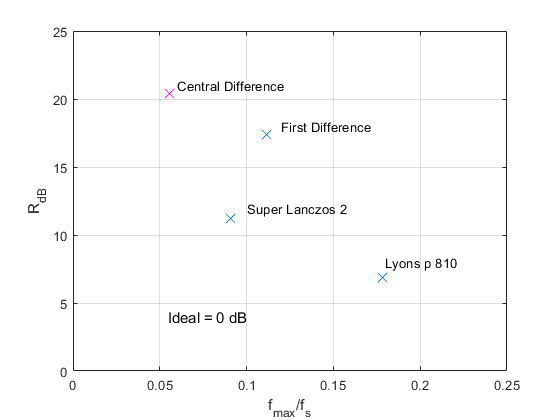 The simple differentiators we discussed above are often appropriate, but they do not perform well in the presence of noise, and their usable bandwidth is arbitrary.  We can design better-performing differentiators using the following equation, which lets us choose a goal for ωc [1]:

where -N/2 <= k <= N/2 and N = ntaps – 1.  The Matlab function diff_synth.m listed in Appendix A of the PDF version uses this equation, along with a Hanning window function, to design custom differentiators.  Note that the differentiators’ usable bandwidth ωmax is less than ωc.

As an example, suppose we want to design a 25-tap differentiator with ωc = π/2, as shown in the top of Figure 5.  The Matlab code is:

The resulting coefficients are shown in Figure 5 (bottom).  The magnitude response and response percent error (Equation 11) are plotted in Figure 6.  They are computed as follows:

Finally, another option for designing differentiators is the Matlab function firpm, with ‘ftype’ = ‘differentiator’.  This function uses the Parks-McClellan algorithm, and should be more efficient than the method used in diff_synth.m. 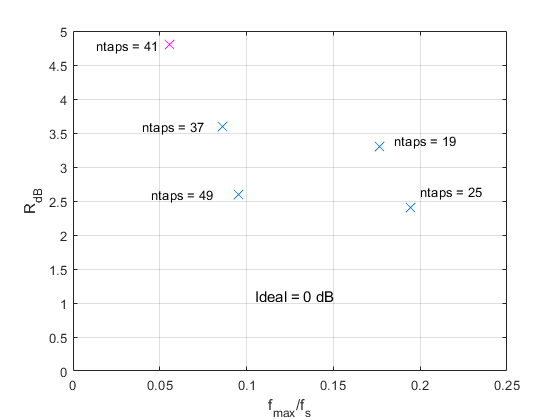 For Appendices, see the PDF version of this post.

Thank you for a thought-provoking article.

Can you give a mathematical expression involving the magnitude responses in Figure 1 that shows these two transfer functions have "equal usable bandwidth?" It sure doesn't _look_ like it to me, but I'm not sure how you define "usable bandwidth."

I base usable bandwidth on the percent error of the responses (I allowed 2% maximum error in my examples). In figure 1, each response has 2% error at slightly less than pi/8 radians.

An example of the error is given in the center plot of figure 6.  I don't explicitly evaluate H(k):  I use the freqz function to compute it.  Later in the article, I give the following code to compute percent error:

I'm assuming here that I must meet the error critereon over the entire band from 0 to w_max.  For a narrowband signal, you only need to evaluate the error (with respect to linear) over the bandwidth of the signal.  In that case, the maximum usable center frequency of the differentiator can be higher.

Sorry for the long delay.

I see what you're doing now. Thanks for the explanations of usable bandwidth and percent error.

So obviously the 41-tap differentiator is going to have better noise performance than the central difference filter. Noise doesn't care about "usable bandwidth" but rather "actual bandwidth" (e.g., 3-dB bandwidth). On the other hand, why pass that extra bandwidth when it's not being differentiated properly?

I still haven't digested your entire article properly. I am looking forward to reading it more thoroughly.

Keep in mind that a differentiator is an odd-symmetric (and thus linear-phase) filter, which is best realized as FIR.

My understanding of FDLS is that it can synthesize IIR or FIR filters.  Since we are dealing with just FIR filters here, it may make more sense to use a method dedicated to FIR synthesis (e.g. the Matlab firpm or firls commands).  firpm uses Parks-McClellan synthesis and firls uses least-squares synthesis.