Add the Hilbert Transformer to Your DSP Toolkit, Part 2

In this part, I’ll show how to design a Hilbert Transformer using the coefficients of a half-band filter as a starting point, which turns out to be remarkably simple.  I’ll also show how a half-band filter can be synthesized using the Matlab function firpm, which employs the Parks-McClellan algorithm.

A half-band filter is a type of lowpass, even-symmetric FIR filter having an odd number of taps, with the even-numbered taps (except for the main tap) equal to zero.  This results in a frequency response with magnitude of 0.5 (-6 dB) at f = fs/4.  In an earlier post [1], I derived the impulse response of an ideal half-band filter:

This impulse response, which is non-causal, is plotted in Figure 1 (top).  In Part 1 of this article, we saw (Equation 12) that the impulse response of an ideal discrete-time Hilbert Transformer is:

Note that the sine values are {… 0, 1, 0, -1, 0 …}.  Equation 3 also applies for realizable half-band filters, as long as they are even symmetric, with the even-numbered taps equal to zero (except for the main tap).  We can write realizable Hilbert Transformer coefficients as:

We note that multiplying the even-symmetric bHB(n) by the odd-symmetric sine in Equation 4 results in bHT(n) being odd symmetric with respect to the center tap.   bHT(n) thus has a pure imaginary frequency response that is odd symmetric.  We can also view the Hilbert Transformer as a band-pass filter centered at fs/4, that is realized by multiplying the half-band taps by a sine of frequency fs/4:

which agrees with Equation 4. 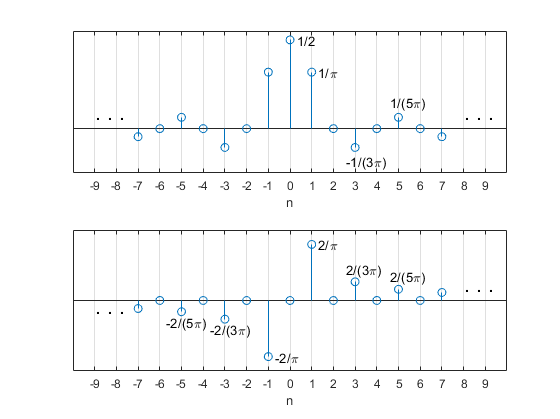 The quantized coefficients can be listed using:

The calculated Hilbert Transformer coefficients are:

The coefficients, which are the same as those used in the examples of Part 1, are plotted in Figure 2c.  Figure 2d plots the pure-imaginary frequency response, calculated relative to the center tap.  The passband of the frequency response is centered at fs/4, as suggested by Equation 5.  The Hilbert Transformer’s image attenuation (defined in Part 1, Example 2) is plotted in Figure 3 using a dB amplitude scale. 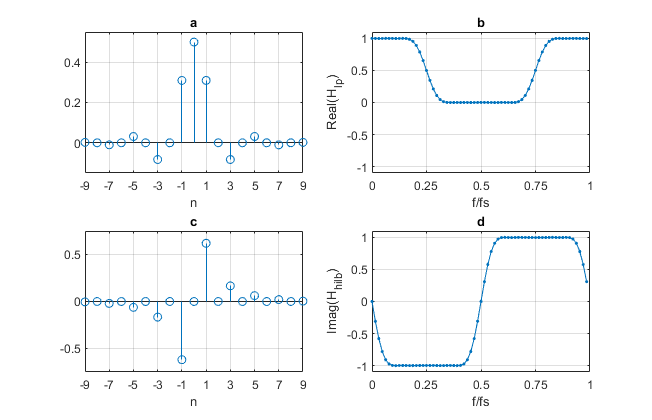 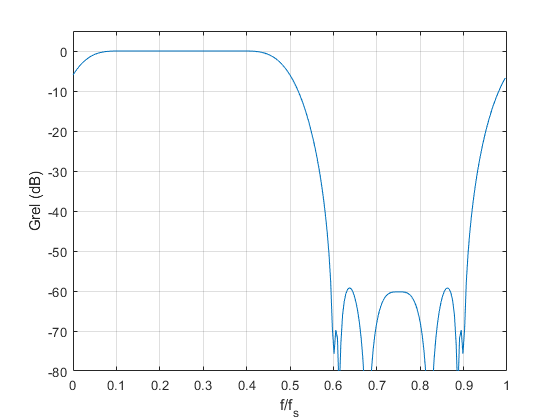 The half-band coefficients used in Example 1 were computed using the Matlab Parks-McClellan synthesis function firpm [2], as will now be described.  The function's inputs are filter order, a vector of passband and stopband frequency pairs, and an amplitude response goal vector.  The amplitude vs frequency goal for this example is plotted in Figure 4:  For fs = 1, the passband edge is fpass =0.15, and the stopband edge is 0.5 – fpass.  For a half-band filter, the passband and stopband frequency ranges must be symmetrical with respect to fs/4.  The Matlab code to synthesize the filter is as follows:

Note that firpm uses frequencies relative to fs/2, which requires dividing the frequency vector by 0.5.  The odd-symmetry of the response goal with respect to fs/4 results in even-numbered taps (other than the main tap) being very close to zero.  They are then forced to zero by using rounding, as shown above.  The coefficients are the same as those listed at the beginning of Example 1: 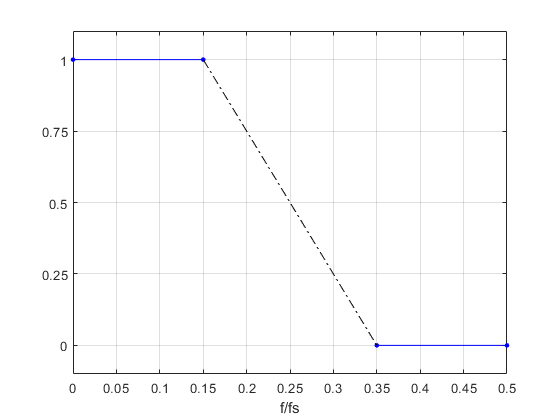 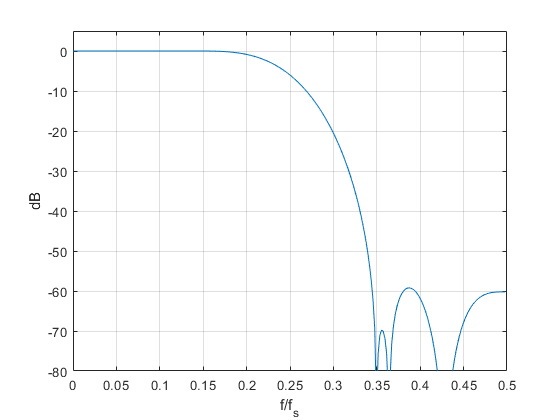 Here we again design a half-band filter and then compute Hilbert Transformer coefficients from the half-band coefficients.  The approach is the same as for Examples 1 and 2, but we change ntaps to 35 and increase the half-band passband edge fpass to 0.2.  We also decrease the coefficient quantization step from 1/1024 to 1/4096.

The resulting coefficients are: 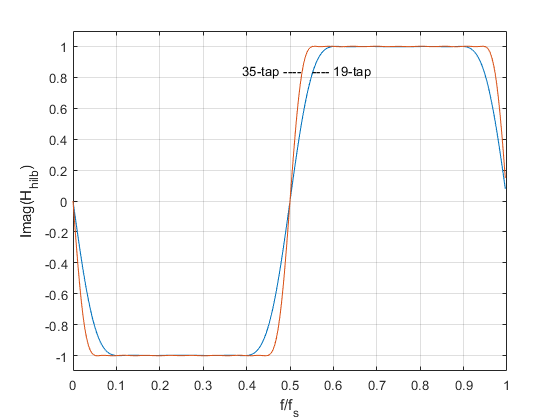 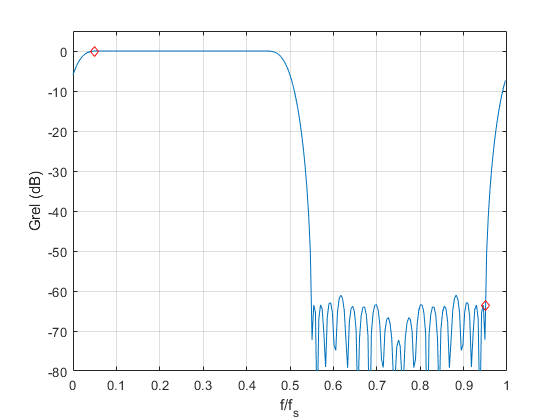 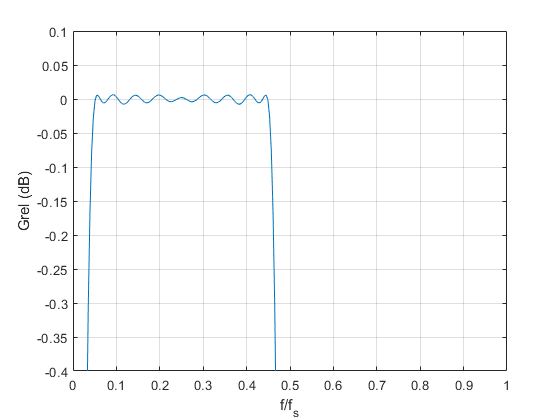 For the appendix, see the PDF version of this post.