Pardon me if my question is very basic.

I would like to know why in the design of an Filter in Matlab, one has to specify sampling frequency.

It looks like the cut-off frequency is defined in terms of sampling frequency. Below is a Matlab sample for an FIR filter:

Any digital system has no sense of time until clock is applied to sample the signal.

So is matlab, DSP, FPGA, ASIC etc. cutoff is relative to Fs as ratio.

Unfortunately many people code things with explicit time vector which I see it misleading and meaningless so far.

Sharan123, the code you posted does two things: (1) it uses an empirical formula to compute a rough estimate, N, of how many coefficients (taps) are needed by a lowpass FIR filter when the lowpass filter's cutoff frequency is 10 kHz, the filter's stopband begins at 15 kHz, and the filter's input sample rate is 192 kHz.  Your computed value for N is N = 69.8.   Because the fir1() command, which computes your filter's coefficients, needs an integer number to define the number of coefficients, you rounded N up to 70 so that your final fir1() command becomes:

The 69 in the fir1() command tells MATLAB you want to compute the coefficients of a 69th-order FIR filter, which will have 70 coefficients (70 taps).

Thanks. I really appreciate your inputs. I think I am clear on the original question. At least, I have lot of input for consumption.

One more question that came to my mind while running the code I posted.

Please see the snippet below.

I was thinking, assuming Nyquist rate is met, is sampling frequency a good thing or a bad thing. FOr example, in the above case, if Fs was very high then N too would be high, resulting in higher filter latency and cost of constructing in HW would also be high. So, are we better to make sure that we sample just enough to be able to resolve the highest frequency and anything more than that comes at a cost.

So,... if the transition band width is narrow relative to Fs then N will be high. To quote Forrest Gump, "And that's all I have to say about that."

Keep design parameters same in the above equation, can I not Fs independently? This is the case I was referring to when I said increasing Fs

f1 or f2 also change with Fs and proportionally

I don't understand what you mean by f1 and f2 change with Fs. Typically, these are independent parameters I start with irrespective of Fs. Can you please elaborate, preferably with an example?

There are two perspectives (and this can cause confusion)

1) you are in digital domain(Matlab) then you apply Fs on your digital stream (x input of a filter) then any frequency in x will be determined by applied Fs.

2)your perspective is an analogue signal digitised at an ADC with selected Fs but fixed analogue frequency. Then if Fs is high relative to cutoff point it requires larger N

Sigh! Why I did not think about this earlier. Yes, I was referring to sampling an analog signal when I referred to Fs.

My design parameter remain the same in case 1 and case 2. In case 2, I decide to sample the signal at twice the rate.

Given this, the N below would be twice that of case 1

My design parameter remain the same in case 1 and case 2."

Would N change, would meaning of f1 and f2 change?

Now if we initially started with Fs = 384000 then how would we know what values would f1 and f2 would be interpreted as?

Sharan123, referencing your post that begins with "I am still trying ...":

Let's change that equation to the product of two ratios, as:

Thanks. I want to clarify on your explanation.

So, in the above example, f1 and f2 remain same.

Your words are not in the form of a question but you ended your words with a question mark. So I'm confused.  Are those words making a statement or asking me a question?

To summarize, keeping f1 and f2 constant, we are varying Fs and deriving value of N for 2 cases of Fs. Is this correct understanding?

If my understanding correct then my original comment that increasing Fs proportionally increases N is probably correct.

I was thinking, assuming Nyquist rate is met, is sampling frequency a good thing or a bad thing. FOr example, in the above case, if Fs was very high then N too would be high, resulting in higher filter latency and cost of constructing in HW would also be high. So, are we better to make sure that we sample just enough to be able to resolve the highest frequency and anything more than that comes at a cost.

For everyone who might want to know, the Matlab functions are easily reachable on the web.  So Google fir1 and the top hit is:

I don't see anything in Matlab fir1 that requires a "sampling frequency".  It appears that the Matlab code provided us includes some estimate formulas being evaluated to determine "N" which would be a reasonable thing to do.  That's the
N = dB*Fs/(22*delta_f) which isn't a formula that I'm familiar with but must have seen somewhere.

This is a lowpass filter with round(N) -1 coefficients and cutoff frequency of "f" = 0.1 where "f" is computed as a fraction of fs/2 which is always the case for a digital filter of course.

So, the reason for using the sampling frequency is really just a convention that's being used in the estimate for N.  It really has nothing to do with Matlab.

It's a fred harris formula Atten/(22*(Fstop-Fpass)

In this particular example, the person is working in real-world units (as indicated in Tim's response below) to define the parameters of the lowpass filter.  The cut-off frequency is 10 kHz and the desired attenuation between 10 kHz and 15 kHz must be around 40 dB.  The 40 dB attenuation requirement within the 5 kHz range determines the necessary filter order of 69 (the first parameter in the call to the FIR1 function;  which corresponds to 70 filter coefficients).

In Matlab you can show the frequency response of a filter using the FREQZ function.  If you typically work in real-world units, you can plot the response with frequency units in Hertz. 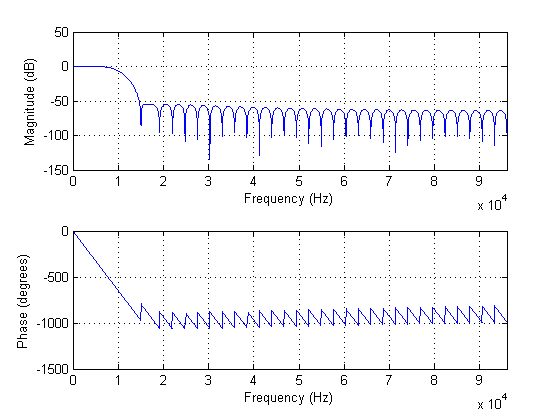 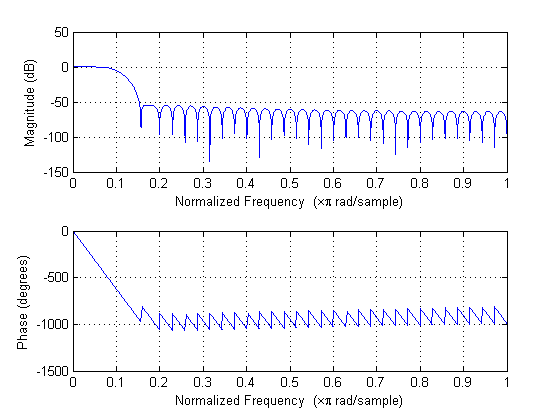 Since this is a FIR filter, the second argument in the FIR1 function is 1, or unity, since there are no coefficients in the denominator of the discrete-time filter function (which are the a-coefficients).  The value of 4096 simply determines the number of points at which the FREQZ function calculates the magnitude and phase response of the lowpass filter response defined by the hc coefficients (which are the b-coefficients).

But, if you need to specify the filter in real-world units then you need the sampling frequency.