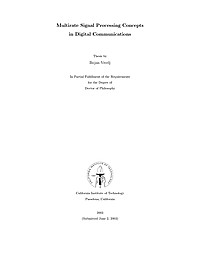 Multirate systems are building blocks commonly used in digital signal processing (DSP). Their function is to alter the rate of the discrete-time signals, by adding or deleting a portion of the signal samples. They are essential in various standard signal processing techniques such as signal analysis, denoising, compression and so forth. During the last decade, however, they have increasingly found applications in new and emerging areas of signal processing, as well as in several neighboring disciplines such as digital communications. The main contribution of this thesis is aimed towards a better understanding of multirate systems and their use in modern communication systems. To this end, we first study a property of linear systems appearing in certain multirate structures. This property is called biorthogonal partnership and represents a terminology introduced recently to address a need for a descriptive term for such class of filters. In the thesis we especially focus on the extensions of this simple idea to the case of vector signals (MIMO biorthogonal partners) and to accommodate for nonintegral decimation ratios (fractional biorthogonal partners). The main results developed here study the properties of biorthogonal partners, e.g., the conditions for the existence of stable and of finite impulse response (FIR) partners. In this context we develop the parameterization of FIR solutions, which makes the search for the best partner in a given application analytically tractable. This proves very useful in their central application, namely, channel equalization in digital communications with signal oversampling at the receiver. A good channel equalizer in this context is one that helps neutralize the distortion on the signal introduced by the channel propagation but not at the expense of amplifying the channel noise. In the second part of the thesis, we focus on another class of multirate systems, used at the transmitter side in order to introduce redundancy in the data stream. This redundancy generally serves to facilitate the equalization process by forcing certain structure on the transmitted signal. We first consider the transmission systems that introduce the redundancy in the form of a cyclic prefix. The examples of such systems include the discrete multitone (DMT) and the orthogonal frequency division multiplexing (OFDM) systems. We study the signal precoding in such systems, aimed at improving the performance by minimizing the noise power at the receiver. We also consider a different class of communication systems with signal redundancy, namely, the multiuser systems based on code division multiple access (CDMA). We specifically focus on the special class of CDMA systems called `a mutually orthogonal usercode receiver' (AMOUR). We show how to find the best equalizer from the class of zero-forcing solutions in such systems, and then increase the size of this class by employing alternative sampling strategies at the receiver. 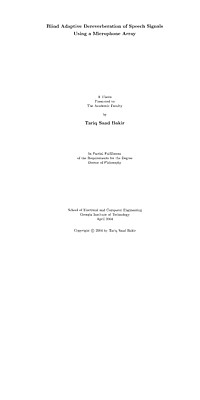 In this thesis, we present a blind adaptive speech dereverberation method based on the use of a reduced mutually referenced equalizers (RMRE) criterion. The method is based on the idea of the inversion of single-input multiple-output FIR linear systems, and as such requires the use of multiple microphones. However, unlike many traditional microphone array methods, there is no need for a specific array configuration or geometry. The RMRE method finds a subset of equalizers for a given delay in a single step, without the need for the typical channel estimation step. This makes the method practical in terms of implementation and avoids the pitfalls of the more complicated two step dereverberation approach, typical in many inversion methods. Additionally, only the second-order statistics of the signals recorded by the microphones are used, without the need for utilizing higher-order statistics information typically needed when the channsls have a nonminimum phase response, as is the case with room impulse responses. We present simulations and experimental results that demonstrate the applicability of the method when the input is speech, and show that in the noiseless case, perfect dereverberation can be achieved. We also evaluate its performance in the presence of noise, and we present a possible way to modify the proposed RMRE to work for very low SNR values. We also explore the problems when model-order mismatches are present, and demonstrate that the under-modeling of the channel impulse responses order can be combated by increasing the number of microphones. For order over-estimation, we will show that RMRE can handle such errors with no modification.

Wireless communications systems are evolving to be more diverse in use and more ubiquitous in nature. It is of fundamental importance that we consume the resources available in such systems, i.e., bandwidth and energy, to preserve room for more users and to preserve longevity. Signal processing can greatly help us achieve this. In this thesis we consider improving the utility of resources available in wireless communications systems. The basic obstacle for most wireless communications systems is the multipath channel that causes intersymbol interference. Channel estimation is a crucial step for recovering the transmitted symbols. Moreover, as more devices are equipped with wireless capabilities, the bandwidth becomes scarce and it is important to allow more than one device or more than one user to use the same frequency range or the same channel. However, this introduces multiuser interference, which is again eliminated only if the channel is known. Furthermore, most wireless systems are battery powered, at least at the transmitter end. Hence it is crucial that energy consumption is minimized to preserve the longevity of the system. The contribution of this thesis is three fold: (i) We propose novel bandwidth efficient blind channel estimation algorithms for single input multiple output systems, and for multiuser OFDM systems. The former exploits cyclostationarity inherent in communications signals. The latter exploits the structure introduced to the transmitted signal via precoding. We consider design of such precoders by optimizing performance metrics such as the bit error rate and signal to interference plus noise ratio. (ii) In the multiuser systems case, we propose a novel cooperative OFDM system and show that, when users face significantly different channel conditions, cooperation can improve the performance of all the cooperating users. (iii) We consider energy efficient training based system estimation in large MIMO systems. The goal there is to minimize energy consumption both in transmission of training symbols and in performing computations. We show that by using a divide and conquer strategy in selecting the active set of transmitters and receivers, it is possible to minimize energy consumption without degrading the accuracy of the channel estimate. 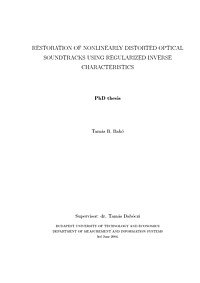 This dissertation is concerned with the possibilities of restoration of degraded film-sound. The sound-quality of old films are often not acceptable, which means that the sound is so noisy and distorted that the listener have to take strong efforts to understand the conversations in the film. In this case the film cannot give artistic enjoyment to the listener. This is the reason that several old films cannot be presented in movies or television. The quality of these films can be improved by digital restoration techniques. Since we do not have access to the original signal, only the distorted one, therefore we cannot adjust recording parameters or recording techniques. The only possibility is to post-compensate the signal to produce a better estimate about the undistorted, noiseless signal. In this dissertation new methods are proposed for fast and efficient restoration of nonlinear distortions in the optically recorded film soundtracks. First the nonlinear models and nonlinear restoration techniques are surveyed and the ill-posedness of nonlinear post-compensation (the extreme sensitivity to noise) is explained. The effects and sources of linear and nonlinear distortions at optical soundtracks are also described. A new method is proposed to overcome the ill-posedness of the restoration problem and to get an optimal result. The effectiveness of the algorithm is proven by simulations and restoration of real film-sound signals. 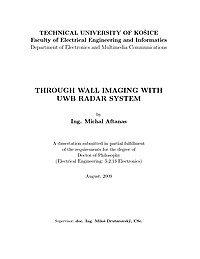 Motivation: A man was interested in knowing of unknown from the very beginning of the human history. Our human eyes help us to investigate our environment by reflection of light. However, wavelengths of visible light allows transparent view through only a very small kinds of materials. On the other hand, Ultra WideBand (UWB) electromagnetic waves with frequencies of few Gigahertz are able to penetrate through almost all types of materials around us. With some sophisticated methods and a piece of luck we are able to investigate what is behind opaque walls. Rescue and security of the people is one of the most promising fields for such applications. Rescue: Imagine how useful can be information about interior of the barricaded building with terrorists and hostages inside for a policemen. The tactics of police raid can be build up on realtime information about ground plan of the room and positions of big objects inside. How useful for the firemen can be information about current interior state of the room before they get inside? Such hazardous environment, full of smoke with zero visibility, is very dangerous and each additional information can make the difference between life and death. Security: Investigating objects through plastic, rubber, dress or other nonmetallic materials could be highly useful as an additional tool to the existing x-ray scanners. Especially it could be used for scanning baggage at the airport, truckloads on borders, dangerous boxes, etc.

Audio time-scale modification is an audio effect that alters the duration of an audio signal without affecting its perceived local pitch and timbral characteristics. There are two broad categories of time-scale modification algorithms, time-domain and frequency-domain. The computationally efficient time-domain techniques produce high quality results for single pitched signals such as speech, but do not cope well with more complex signals such as polyphonic music. The less efficient frequencydomain techniques have proven to be more robust and produce high quality results for a variety of signals; however they introduce a reverberant artefact into the output. This dissertation focuses on incorporating aspects of time-domain techniques into frequency-domain techniques in an attempt to reduce the presence of the reverberant artefact and improve upon computational demands. From a review of prior work it was found that there are a number of time-domain algorithms available and that the choice of algorithm parameters varies considerably in the literature. This finding prompted an investigation into the effects of the choice of parameters and a comparison of the various techniques employed in terms of computational requirements and output quality. The investigation resulted in the derivation of an efficient and flexible parameter set for use within time-domain implementations. Of the available frequency-domain approaches the phase vocoder and timedomain/ subband techniques offer an efficiency and robustness advantage over sinusoidal modelling and iterative phase update techniques, and as such were identified as suitable candidates for the provision of a framework for further investigation. Following from this observation, improvements in the quality produced by time-domain/subband techniques are realised through the use of a bark based subband partitioning approach and effective subband synchronisation techniques. In addition, computational and output quality improvements within a phase vocoder implementation are achieved by taking advantage of a certain level of flexibility in the choice of phase within such an implementation. The phase flexibility established is used to push or pull phase values into a phase coherent state. Further improvements are realised by incorporating features of time-domain algorithms into the system in order to provide a ‘good’ initial set of phase estimates; the transition to ‘perfect’ phase coherence is significantly reduced through this scheme, thereby improving the overall output quality produced. The result is a robust and efficient time-scale modification algorithm which draws upon various aspects of a number of general approaches to time-scale modification.