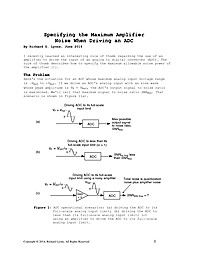 Specifying the Maximum Amplifier Noise When Driving an ADC

I recently learned an interesting rule of thumb regarding the use of an amplifier to drive the input of an analog to digital converter (ADC). The rule of thumb describes how to specify the maximum allowable noise power of the amplifier. 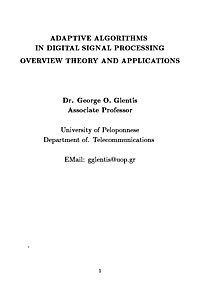 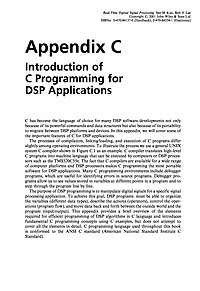 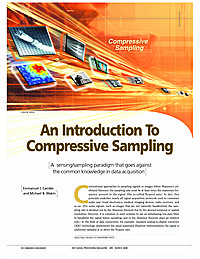 An Introduction To Compressive Sampling

This article surveys the theory of compressive sensing, also known as compressed sensing or CS, a novel sensing/sampling paradigm that goes against the common wisdom in data acquisition. 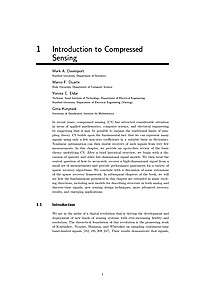 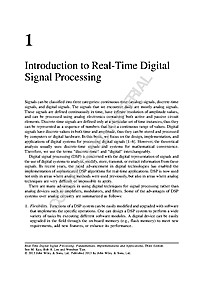 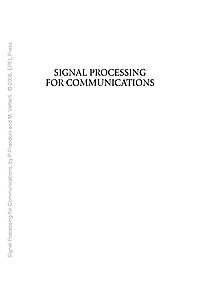 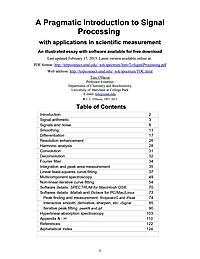 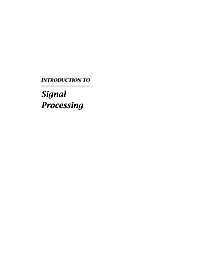 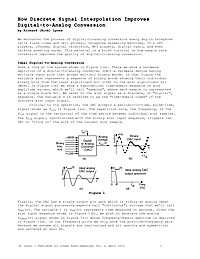 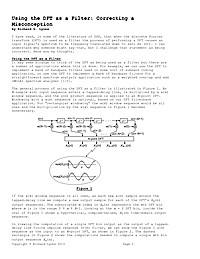 Using the DFT as a Filter: Correcting a Misconception

I have read, in some of the literature of DSP, that when the discrete Fourier transform (DFT) is used as a filter the process of performing a DFT causes an input signal's spectrum to be frequency translated down to zero Hz (DC). I can understand why someone might say that, but I challenge that statement as being incorrect. Here are my thoughts. 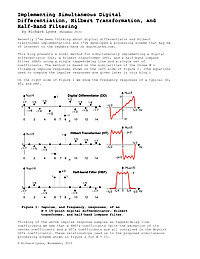 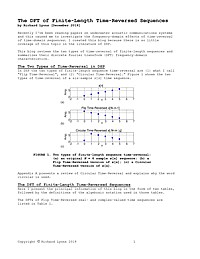 The DFT of Finite-Length Time-Reversed Sequences

Recently I've been reading papers on underwater acoustic communications systems and this caused me to investigate the frequency-domain effects of time-reversal of time-domain sequences. I created this article because there is so little coverage of this topic in the literature of DSP. 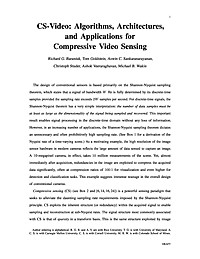 The design of conventional sensors is based primarily on the Shannon-Nyquist sampling theorem, which states that a signal of bandwidth W Hz is fully determined by its discrete-time samples provided the sampling rate exceeds 2W samples per second. For discrete-time signals, the Shannon-Nyquist theorem has a very simple interpretation: the number of data samples must be at least as large as the dimensionality of the signal being sampled and recovered. This important result enables signal processing in the discrete-time domain without any loss of information. However, in an increasing number of applications, the Shannon-Nyquist sampling theorem dictates an unnecessary and often prohibitively high sampling rate. (See Box 1 for a derivation of the Nyquist rate of a time-varying scene.) As a motivating example, the high resolution of the image sensor hardware in modern cameras reflects the large amount of data sensed to capture an image. A 10-megapixel camera, in effect, takes 10 million measurements of the scene. Yet, almost immediately after acquisition, redundancies in the image are exploited to compress the acquired data significantly, often at compression ratios of 100:1 for visualization and even higher for detection and classification tasks. This example suggests immense wastage in the overall design of conventional cameras. 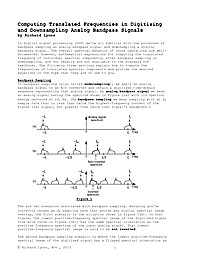 In digital signal processing (DSP) we're all familiar with the processes of bandpass sampling an analog bandpass signal and downsampling a digital bandpass signal. The overall spectral behavior of those operations are well-documented. However, mathematical expressions for computing the translated frequency of individual spectral components, after bandpass sampling or downsampling, are not available in the standard DSP textbooks. This document explains how to compute the frequencies of translated spectral components and provide the desired equations in the hope that they are of use to you. 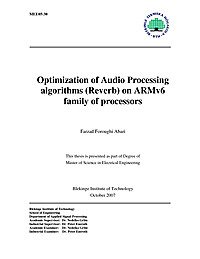 Audio processing algorithms are increasingly used in cell phones and today’s customers are placing more demands on cell phones. Feature phones, once the advent of mobile phone technology, nowadays do more than just providing the user with MP3 play back or advanced audio effects. These features have become an integral part of medium as well as low-end phones. On the other hand, there is also an endeavor to include as improved quality as possible into products to compete in market and satisfy users’ needs. Tackling the above requirements has been partly satisfied by the advance in hardware design and manufacturing technology. However, as new hardware emerges into market the need for competence to write efficient software and exploit the new features thoroughly and effectively arises. Even though compilers are also keeping up with the new tide space for hand optimized code still exist. Wrapped in the above goal, an effort was made in this thesis to partly cover the competence requirement at Multimedia Section (part of Ericsson Mobile Platforms) to develope optimized code for new processors. Forging persistently ahead with new products, EMP has always incorporated the latest technology into its products among which ARMv6 family of processors has the main central processing role in a number of upcoming products. To fully exploit latest features provided by ARMv6, it was required to probe its new instruction set among which new media processing instructions are of outmost importance. In order to execute DSP-intensive algorithms (e.g. Audio Processing algorithms) efficiently, the implementation should be done in low-level code applying available instruction set. Meanwhile, ARMv6 comes with a number of new features in comparison with its predecessors. SIMD (Single Instruction Multiple Data) and VFP (Vector Floating Point) are the most prominent media processing improvements in ARMv6. Aligned with thesis goals and guidelines, Reverb algorithm which is among one of the most complicated audio features on a hand-held devices was probed. Consequently, its kernel parts were identified and implementation was done both in fixed-point and floating-point using the available resources on hardware. Besides execution time and amount of code memory for each part were measured and provided in tables and charts for comparison purposes. Conclusions were finally drawn based on developed code’s efficiency over ARM compiler’s as well as existing code already developed and tailored to ARMv5 processors. The main criteria for optimization was the execution time. Moreover, quantization effect due to limited precision fixed-point arithmetic was formulated and its effect on quality was elaborated. The outcomes, clearly indicate that hand optimization of kernel parts are superior to Compiler optimized alternative both from the point of code memory as well as execution time. The results also confirmed the presumption that hand optimized code using new instruction set can improve efficiency by an average 25%-50% depending on the algorithm structure and its interaction with other parts of audio effect. Despite its many draw backs, fixed-point implementation remains yet to be the dominant implementation for majority of DSP algorithms on low-power devices. 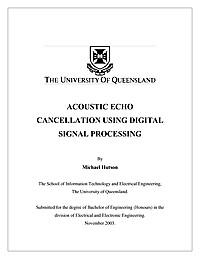 Acoustic echo cancellation is a common occurrence in todays telecommunication systems. It occurs when an audio source and sink operate in full duplex mode, an example of this is a hands-free loudspeaker telephone. In this situation the received signal is output through the telephone loudspeaker (audio source), this audio signal is then reverberated through the physical environment and picked up by the systems microphone (audio sink). The effect is the return to the distant user of time delayed and attenuated images of their original speech signal. The signal interference caused by acoustic echo is distracting to both users and causes a reduction in the quality of the communication. This thesis focuses on the use of adaptive filtering techniques to reduce this unwanted echo, thus increasing communication quality. Adaptive filters are a class of filters that iteratively alter their parameters in order to minimise a function of the difference between a desired target output and their output. In the case of acoustic echo in telecommunications, the optimal output is an echoed signal that accurately emulates the unwanted echo signal. This is then used to negate the echo in the return signal. The better the adaptive filter emulates this echo, the more successful the cancellation will be. This thesis examines various techniques and algorithms of adaptive filtering, employing discrete signal processing in MATLAB. Also a real-time implementation of an adaptive echo cancellation system has been developed using the Texas Instruments TMS320C6711 DSP development kit. 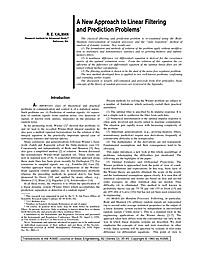 A New Approach to Linear Filtering and Prediction Problems

In 1960, R.E. Kalman published his famous paper describing a recursive solution to the discrete-data linear filtering problem. Since that time, due in large part to advances in digital computing, the Kalman filter has been the subject of extensive research and application, particularly in the area of autonomous or assisted navigation.